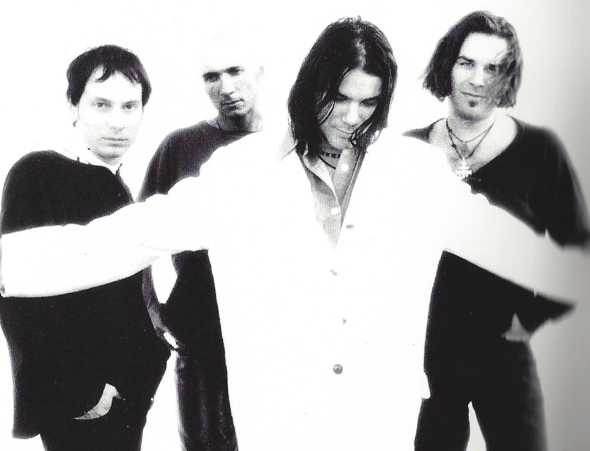 Hailing from Macomb, Illinois, while just college students, Christopher Hall and Walter Flakus set out to start a band, and that band was Stabbing Westward. With Hall on vocals/bass, Flakus on keyboards, and Jim Calnin on guitar, it was not until the band’s Columbia Records debut album, Ungod, in 1994, that they started to garnish attention with single “Nothing.” Possessing an Industrial sound, Ungod sold well enough that Stabbing Westward would return two years later for their album Wither, Blister, Burn, & Peel. Recorded at Bearsville Studios in Woodstock, New York in 1995 with accomplished producer John Fryer (Depeche Mode, Yazoo), at the time, the band did not have a steady guitarist since Stuart Zechman left.  Undaunted, Jim Sellers and Drummer Andy Kubiszewski played the parts. Then, on January 23rd, in 1996, Wither, Blister, Burn, & Peel hit stores on its way to becoming Stabbing Westward’s first studio record to reach gold status. Now celebrating its twentieth anniversary, the album was a important turning point for Stabbing Westward’s career and considered by fans one of their best ever.

Breaking from Ungod’s synth-based leanings, Wither, Blister, Burn, & Peel shows the progression of the band’s style with a more guitar-driven sound. This change punctuates the darkness with the album’s chronicling relationships Hall and Kubiszewski were involved in at the time, and how they coped with the said break-ups while trying to put a bit of a positive spin on the cards they were dealt. Hence, this could be why the cover art depicts religious imagery with nature graphics of a rosary and cherub, a leaf and seashells, which could be taken with renewal.  However, the renewal graphics are broken by panes, and the rosary’s on the left in possible conflict when the devout would place the rosary on the right.  With this conflict, audiences got into it musically, and the lyrical content spoke to them vividly.

With that in mind, Wither, Blister, Burn, & Peel is ten tracks of cutting, Industrial Metal with Hall’s vocals rising during the choruses and falling during the verses, beginning with the aggressive “I Don’t Believe.” It is a piece that begins with an inner-monologue of Hall berating himself as the guitars grind in with his incredulous scream before settling down to sing about letting his true feelings be manipulated despite constant relationship abuse.  Throughout the track, Hall goes through the contemplative aspects of thinking through a relationship, but screams the chorus like anyone would, “I don’t believe!”  Coming in on a little feedback, “Shame” grinds in with a sharpness and a driving beat.  Again, there is a contemplative rise and fall between the verses and chorus as Hall sings about obsession.  The second single off the record, a video was also released that depicted the theme with a couple in a toxic relationship that ultimately ends in a death. To many, this is one of Stabbing Westward’s best tracks ever recorded.

Then there is “What Do I Have to Do?,” which is based on one of Kubiszewski’s past relationships, and is widely considered Stabbing Westward’s first hit.  With its blend of Metal and Electronica, Hall sings plaintively aggressive of how can he make the relationship work, or forget about it if he has to.  This song also had a video released, which saw heavy play on MTV. Like the track “Shame,” ultimately, the video ends badly.  “Why” broods with emotion as the Electronica takes center stage as the bass heavy synths give a mysterious beat for the accompanying synths to wrap the ethereal melody around while the wispy drums keep time as Hall gently sings that only one truly hurts when a relationship breaks up badly.  “Why” was made into a popular YouTube video by AJ Johnson with the track put to scenes from 1994’s film The Crow.  Following is “Inside You,” which has a synth bass-driven and accompanying building drums intro with Hall’s tempered vocals until the emotion boils over and his voice opens up with the crash of drums and grinding riffs.  Moody and passionate, this song is definitely an Industrial power ballad.

Keeping the album strong, “Falls Apart” has a metallic Beatles-like feel as guitars grind and drums drive with a progressive retro drive accompanied by bits of Electronica interspersed. Meanwhile, Hall sings about the differences between he and the one he broke with, he falling apart while she shed her bad skin to renewal.  With a Metal, Funk-like vibe, “So Wrong” comes in, taking a head-bopping melody and juxtaposing it with lyrics of darkness that speak of the paradox of the abused wanting the abuser regardless with the self-destructive lyrics, “It’s so wrong that I need you/It’s so wrong that I need abuse.”  The simple strokes of the beginning of “Crushing Me” make it one of the album’s darkest tracks. Adding a weight, Hall’s singing is barely audibly before the simple riff dominates and his voice rises with a bite for the chorus in this tune.  Coming on with a full Industrial sound, “Sleep” features heavy guitars and an underlying wail that follows the melody throughout.  This track is probably the most personal track as Hall sings about an ex, who was molested by her father.  Finally, drawing Wither, Blister, Burn, & Peel to a close is “Slipping Away,” a slower piece by comparison to the rest of the album, with its more traditional Metal melody and beat.  Still, Stabbing Westward slips in Industrial bits of spice as Hall’s voice waves in peaks and valleys that both seem tempered as well as manic at once, complementing the instrumentation.  The message with this track fits perfectly as a conclusion to the album as Hall sings about moving on whether in life or, to a darker extent, suicide.

While it is true that 1998’s Darkest Days was the peak of Stabbing Westward’s mainstream success with the megahit “Save Yourself,” the fact is, Wither, Blister, Burn, & Peel paved the road for the band. The album has still sold more copies than any of Stabbing Westward’s three other records, and to dedicated fans, is the perfect mix of Rock and Industrial. Sadly, Stabbing Westward ended in 2002 following their more natural Rock sounding self-titled album in 2001. Hall did however resurface in the band called The Dreaming, in quest to find the perfect sound he always yearned. Now fifteen years later, The Dreaming has released three records, the last being 2015’s Rise Again which sees Hall reunited with Flakus. While Stabbing Westward is long gone, Wither, Blister, Burn, & Peel remains a bold moment in the band’s career, even twenty years later. 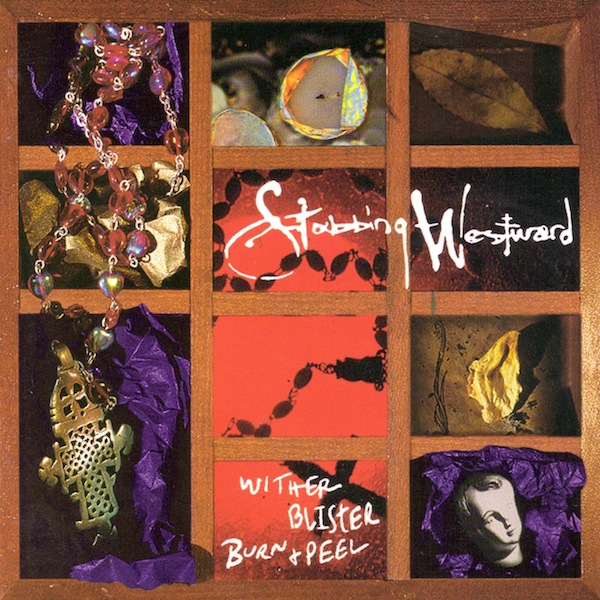