It has been sometime since there has been a new Horror Musical. Until the release, Stage Fright first premiered at SXSW in March of 2014 with a clever tagline of Sing your heart out. Written and directed by Jerome Sable (The Legend of Beaver Dam 2010), Stage Fright begins with stage star Kylie Swanson played by singer and actress Minnie Driver (Golden Eye 1995, Good Will Hunting 1997), performing at the end of the stage production The Haunting of the Opera which is loosely based on the Phantom of the Opera (1925).  Backstage, Kylie speaks to her twin children, Camilla and Buddy, and gives Camilla a signed photo of her. Her manager, Roger McCall played by musical star and actor Meat Loaf (Rocky Horror Picture Show 1975, Fight Club 1999), is excited about new reviews she has received for her performance. After everyone leaves her to redress after the show, a masked person comes up behind her. It appears they are having a relationship, until he brutally kills her. 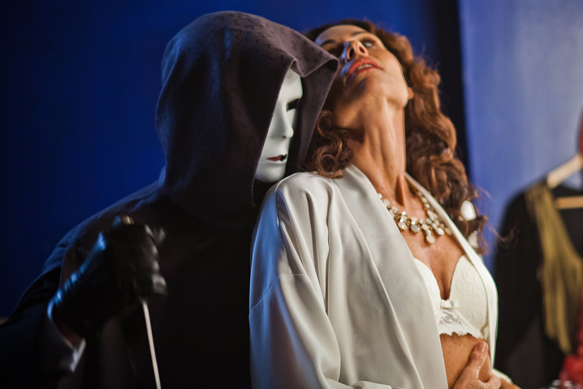 Fast forwarding several years in the future, Camilla (Allie MacDonald: House at the  Edge of the Street 2012) and her brother Buddy (Douglas Smith: Percy Jackson: Sea of Monsters 2013) are cooks at Camp Centre Stage for musically inclined kids. Kylie’s manager is now the guardian of Buddy and Camilla after their mother’s death and Camilla still feels guilt and misses her mother dearly. When all the campers arrive and the program starts, they begin preparations for their yearly musical, which just happens to be a Japanese Kabuki version of The Haunting of the Opera.  Camilla desires desperately to play the main role of Sophia in the production, but as she works at the camp is not allow to audition for the part. However, after hearing her voice and seeing her, stage director Artie (Brandon Uranowithz:  Law & Order: Criminal Intent series) is determined to let her try.  Hell bent to play the lead is Liz (Melanie Leishman: True Confessions of a Hollywood Starlet 2008, Victoria Day 2009) who will do whatever she can to make sure she does. 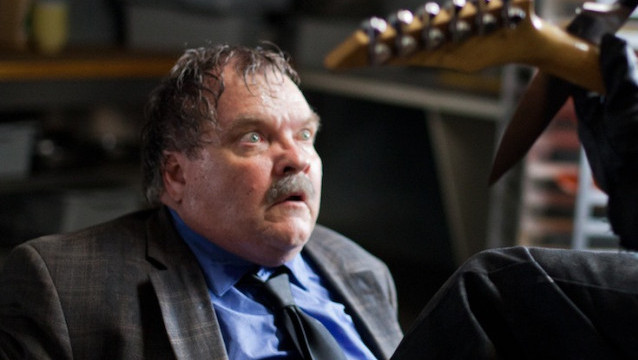 The production The Haunting of the Opera brings the ire of an infamous masked serial killer who is determined to wipe the cast out one by one, in bloody and gory fashion, to the background of heavy metal music. As opening night draws closer, the campers are not happy and the killer cannot keep control any longer. There is also an undeniable link between this current masked psycho and Kylie’s death all those years earlier.  Buddy tries talking Camilla into leaving the play behind and starting fresh elsewhere, but she seems inexplicably drawn to the show and her mother’s role as Sophia.  Will the show go ahead as people start dying? Will Buddy call the police and keep the camp running financially until after the production? Will a production scout see Camilla and like the show? Watch Stage Fright to find out, how it all ties together neatly at the end. While the serial killer might not be a surprise, how it all ties together is. 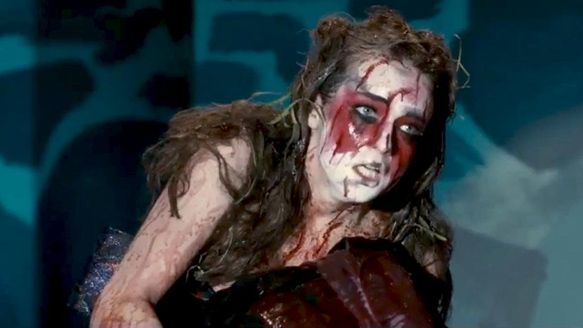 Stage Fright has a strong musical theme and may not appeal to those who do not like musicals. However, even if some viewers wish to give the film a try and be open minded, the songs are very funny, unconventional, not politically correct, and immensely entertaining. This movie will leave audiences giggling even as copious amount of blood splash across the screen.  CrypticRock give Stage Fright 4 out of 5 stars. 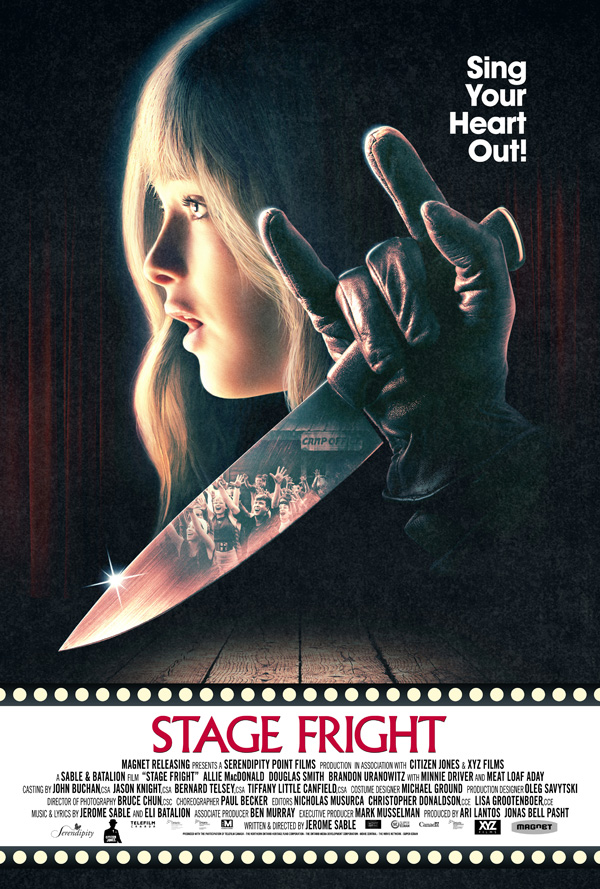