Back in the late 1980s, when cable television was still very popular in the USA, there was one channel in particular that stood out the most; one channel that used to air an onslaught of rarely-seen Horror movies during the late-hours of Fridays and Saturdays. The channel was Cinemax, and it had bite to its movie roster – unapologetically showing uncut and unrated films into the wee hours of the night, and any viewer lucky enough to experience this was treated to some wonderful memories. 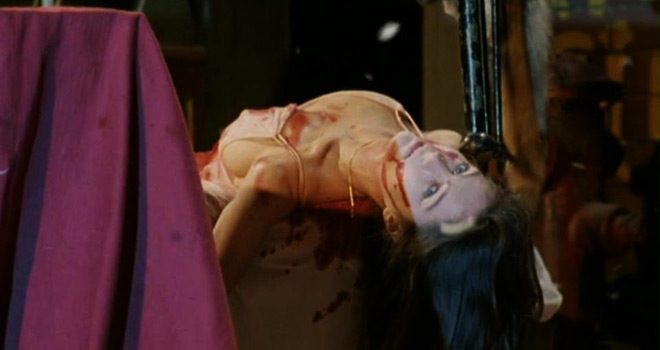 Though, as the years passed, and as the times changed, cable boxes have since collected dust. In addition, collections of VHS tapes became obsolete as the age of the DVD came into play. During these changes throughout the years, quick flashes would zap the brain back to those times, those memories, those moments of watching obscure Horror movies on late-night cable television. Yesteryear had now become, to viewers, an overwhelming sense of bitter-sweet nostalgia.

This is what will happen when someone puts into the VCR, a copy of Michele Soavi’s award-winning Horror film StageFright, and presses PLAY. That said, even after thirty years, the classic Giallo film is still as ripe today—with its look and feel of a late ’80s film—as it was when it was first released in Italy back in July 27th of 1987.

Not officially released in the USA until 2 years later in 1989, there is a soft, warm tone to the picture-quality of this movie that begs to be reminded of how films used to be made. Going by various titles originally including Deliria, Bloody Bird, Sound Stage Massacre, but most famously as StageFright, the really cool thing about the often overlooked, stylish film, is not what the story entails, but how a family of friends came together to make the story come to life on the big/little screen.

It is no wonder StageFright overflows with nostalgia: the entire cast and crew practically grew old together! How?—from making movies with one another! Each person of this family had a hand in many different positions, too, whether it was as a second unit director, an actor, a writer, or as a director. This family of friends became a troupe of sorts that made some great films throughout the ’70s and ’80s. This troupe also helped to inspire and encourage one another along the way. 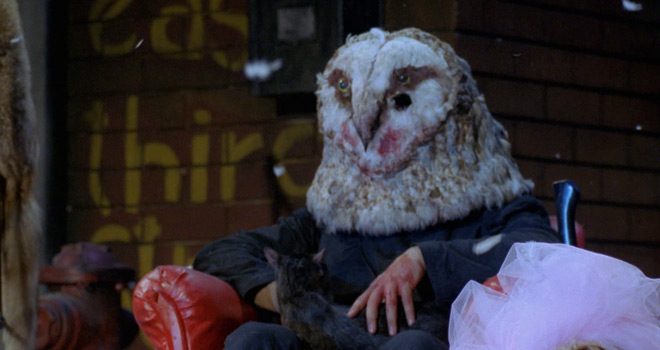 Cutting to the chase, StageFright is Soavi’s first feature-length film, and a remarkable one at that. Before Soavi’s début, he worked with many different directors in the era of the Italian B-film, such as legends including Dario Argento (Suspiria 1977, Tenebrae 1982) and Lamberto Bava (Macabre 1980, Demons 1985), serving as either First Assistant, Second Unit Director, or as an actor, and sometimes as both! Soavi did the same type of stuff when he worked alongside Writer/Director/Producer Joe D’Amato (Buio Omega 1979, Endgame 1983), who not only asked Soavi to direct Stagefright, but also produced it. A respected name in Italian Horror cinema, Soavi would later direct 1989’s The Church and the very-celebrated 1994’s Cemetery Man.

Here is where the family of friends extends a little more. The persons responsible for StageFright’s screenplay were Writers Sheila Goldberg (Body Count 1986, Beyond The Door III 1989) and George Eastman, who uses the moniker Lew Cooper in the credits. Born Luigi Montefiori, Eastman has starred in and written more Spaghetti Westerns than there are dried spaghetti strands in a box, while also making a name for himself writing screenplays.

Eastman’s most prominent feature was the 1980 movie Anthropophagus, which he co-wrote the screenplay with D’Amato, who also directed the movie! Eastman even starred as the monster in Anthropophagus! It gets better: Goldberg helped write the script for the 1988 movie (Zombie 5) Killing Birds—which D’Amato helped to direct, uncredited-ly! This all seems like a game called Six Degrees To Michele Soavi, no? 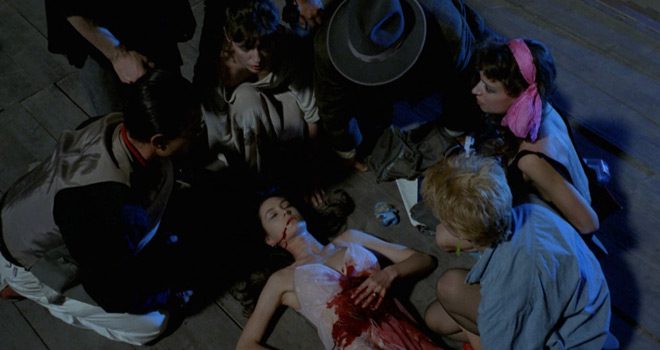 Moving on to the storyline of StageFright, there is a certain significance to the plot more than the average Slasher flick which involves a cast and crew rehearsing a stage-musical called The Night Owl. This musical is based on a fictional serial killer that murders innocent victims while wearing an owl-head mask. It is also complete with songs, and ’80s dance moves. When the cast and crew are locked inside the theatre during a nasty storm, they have to now survive the night as an uninvited guest donning the owl costume hunts down each of the members, murdering whomever gets in the way.

The significant part is that StageFright is about a stage-troupe putting on a stage-musical, which just so happens to be about a slasher. Unlike other Slasher-like films at the time, the characters were believable. In fact, accomplished Italian Film/Theater Actor Giovanni Lombardo Radice, aka John Morghen, who played the role of Brett, told CrypticRock, “I had no problem in StageFright. I had no problems there because it was absolutely believable. The character was believable; it was a gay dancer, an extremely gay dancer who at a point was afraid of a killer.”

In addition to this, could it be that Eastman, Soavi, and D’Amato created a film depicting their lives together as a troupe of filmmakers creating a movie within the movie? Could it be that these filmmakers were nodding to one another, to the people from their past, and to the many Slasher/Horror films from the ’70s and ’80s? Could it also be that these filmmakers knew StageFright would be one the last of its kind? Even that is too far-fetched an idea to some, it is still kind of neat to think it were all true. It would also explain why watching a well done film like StageFright gives off so much of that nostalgic feeling. 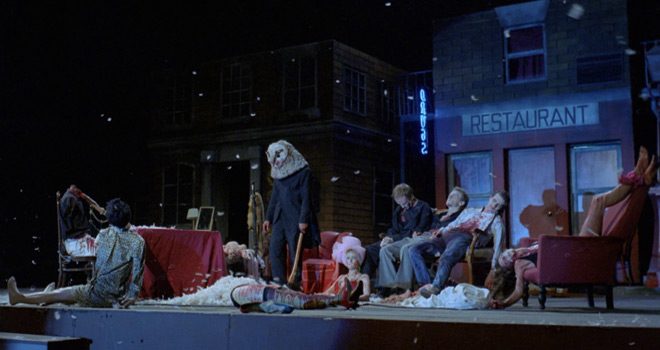 Interestingly enough, because of Eastman’s height, which was almost seven feet, all the scenes of the killer in the owl-head mask is played by him; and boy does he give a phenomenal performance. He moves with a furtive conviction in his step, perfectly portraying an emotionless killer out to finish the job. The last half of StageFright is also the best half, particularly the scene where the killer (Eastman) decorates the stage with his own sick and twisted interior design. Eastman, however, was not billed in the credits for this portrayal, which proves, in this instance, that family does come first. Another fun fact, D’Amato went under the moniker David Hill to help produce the infamous 1990 movie Troll 2.

Yes, the old days have gone, they have passed, but thanks to StageFright, anyone can revisit that era again. It is movies like this that make once-young moviegoers yearn for those fun times of late-night viewings. Anyone can make a film these days, copying from whomever, trying to perfect the end result.

Soavi and his troupe did this simply with an old secret recipe. In the hands of anyone else, though, a mixing-bowl would be filled with the same bland ingredients to make an everyday, typical Slasher film…but, in the hands of a family of friends forged together over two decades long, the contents would be kneaded, spiced, and baked into the perfectly artistic Italian Slasher film. Ding! Order up!—Bon appétit, ladies and gentlemen. 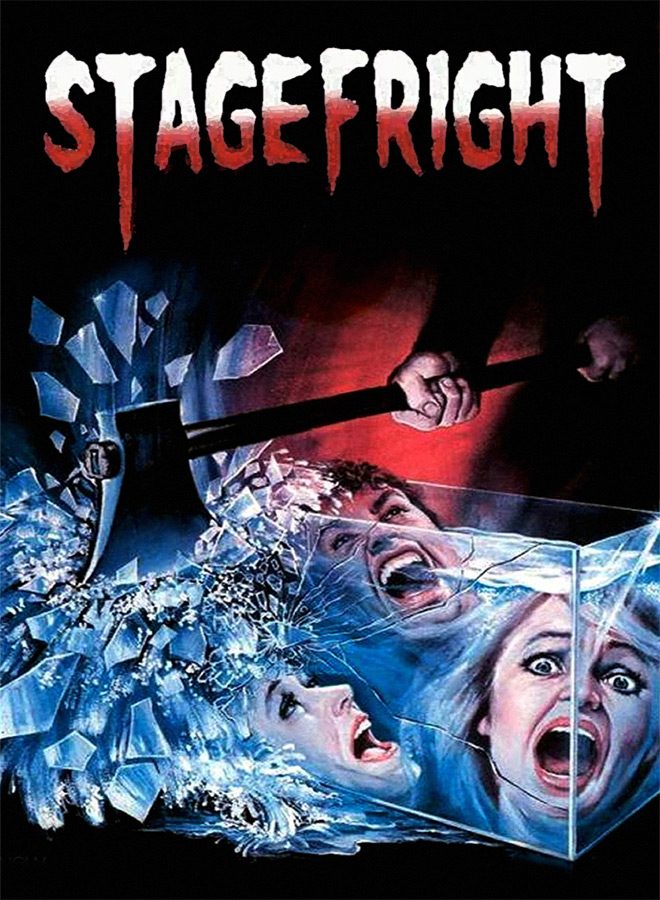