Even on a good day, the desert is a formidable place: it is even worse when you are running for your life and stalked by one truly dogged zombie. On July 28, 2017, the newest offering in the world of zombie apocalypse flicks, the fabulous Horror offering It Stains the Sands Red, opened in select theaters and became available on most major VOD platforms thanks to The Vicious Brothers and Dark Sky Films. Now set for release on Blu-ray/DVD via MPI Media Group as of September 26th, what makes It Stains the Sands Red stand out among other zombie related flicks?

Brittany Allen (The Rocker 2008, Jigsaw 2017) stars as Molly, a stripper and all-around “dumb broad.” On the eve of a zombie apocalypse in Las Vegas, she hits the road with her boyfriend Nick (Merwin Mondesir: The Recruit 2003, Grave Encounters 2011), hoping to rendezvous with Nick’s thug pal Jimmy (Michael Filipowich: Confessions of a Dangerous Mind 2002, Kill Switch 2008) at an airfield in the Nevada desert that will, ultimately, bring them to tropical safety in Mexico. As life is generally unpredictable – especially in a zombie apocalypse – the couple quickly cross paths with a lone, ravenous zombie (Juan Riedinger: Grave Encounters 2011, When We Rise series) who makes mincemeat of Nick.

Racing off into the desert with what few supplies she can grasp – namely, a bottle of vodka, some cigarettes, and a large vial of cocaine – Molly is stalked by the business suit-wearing zombie. Clad in leopard print leggings, a leather bustier, fur coat, and high-heeled booties, she wanders the formidable landscape with her horrific shadow in-tow. For once, however, this zombie does not want brains: he loves intestines!

After a particularly amusing, one-sided conversation with her new bestie, Molly decides to name him “Small Dick,” or “Smalls” for short. With Smalls to keep her motivated, she has but one end goal in mind: make it to the airfield within three days to meet Jimmy and get the hell out of Dodge! A woman on a mission, she will tackle surviving in a desert landscape with few supplies; run-ins with two other survivors – Ted (Kristopher Higgins: In Time 2011, Devil’s Knot 2013) and Jason (Andrew Supanz: The Shark Net mini-series, All Saints series) – who are not what they initially appear to be; and perhaps she will also learn that Smalls is a complex conundrum, part savior and part damnation.

From Writer/Director Colin Minihan (Grave Encounters 2011, Extraterrestrial 2014) and Writer Stuart Ortiz (Grave Encounters 2011, Extraterrestrial 2014) – known collectively as The Vicious Brothers – It Stains the Sands Red clocks in at 92-minutes and should be considered rated a hard-R for language, racist slang, drug use, gore, and one depiction of sexual assault. A humorous and rugged take on the zombie apocalypse, It Stains the Sands Red combines deliciously devious black humor with the Horror inherent in surviving a zombie outbreak, spitting out cinema gold.

Here is the thing: you must have a good sense of (black, dark, morbid) humor to ‘get’ It Stains the Sands Red. You have to be one of those people – dare it be said, a woman – who will understand the comedic irony in getting a visit from your Aunt Flo while trying to outrun a ravenous, blood-thirsty zombie. Creative use of tampons does, in fact, ensue!

Brittany Allen (as Molly) is brilliant in her portrayal of the blood-soaked, downtrodden and yet somehow immensely resilient and triumphant heroine; her character spits moxie in the face of disaster and yet is empathetic enough to experience a kind of reverse Stockholm Syndrome in regards to Smalls. The irony here is that the “dumb broad” that was written off from the get-go becomes a savior, a woman who, sunburnt and dehydrated, harnesses every last drop of chutzpah to save herself and, ultimately, someone she loves.

A great soundtrack is included in the film, along with some superb scenery thanks to the Southwestern deserts. There is one particularly gorgeous, continuous, panoramic shot approximately twelve minutes into the film that highlights the vastness of the landscape, as well as creating a fantastically diminishing feel to Molly and the viewer, lost and confused amid the foothills.

From start to finish, It Stains the Sands Red is a brilliantly fun adventure into a world sitting on the precipice of destruction. As one woman stumbles, blood-soaked and tugging an inflatable raft behind her, she tackles the obstacles put forth by a terrifying new world order. She is a truly flawed heroine who, despite the odds stacked against her, fights one superbly great fight. For creative use of tampons and some deliciously vile humor in the face of an intestine-nomming apocalypse, CrypticRock give It Stains the Sands Red 5 of 5 stars. Now can you say sequel? 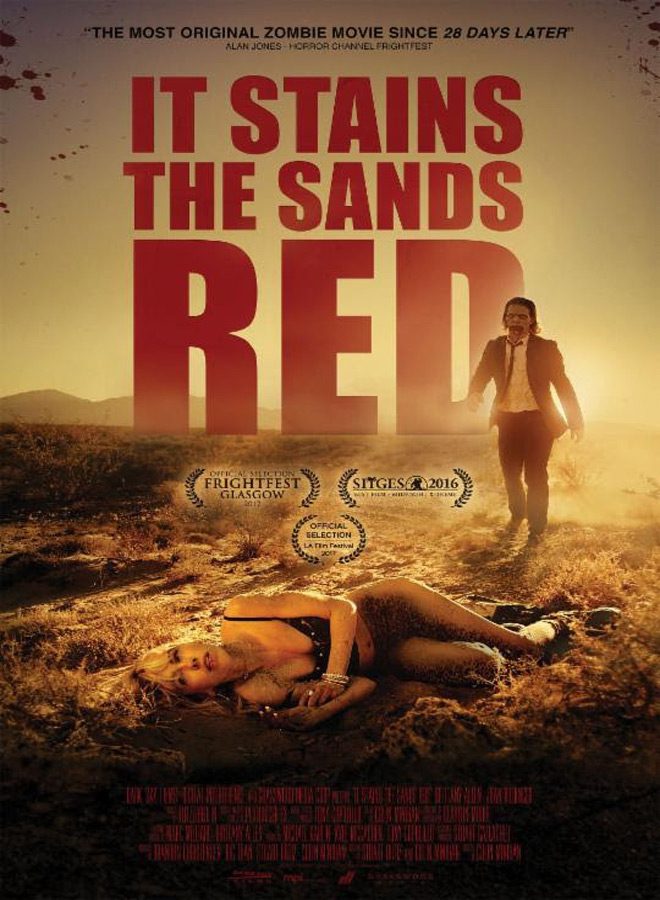 Purchase It Stains the Sands Red: