“A long time ago in a galaxy far, far away . . . ” This text crawled across major theater screens for the very first time 40 years ago on May 25th of 1977, introducing generations to come to the most epic battle of good and evil to date: the Jedi versus the Dark Side, Luke Skywalker and his friends versus the insidious Darth Vader and the Sith Lord. Originally simply entitled Star Wars, re-titled Star Wars: Episode IV – A New Hope in 1981 for re-release, the world of film and Fantasy would forever change thanks to George Lucas. 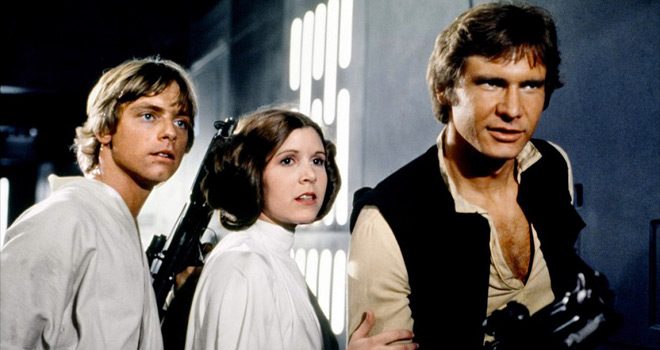 A concept which developed for Lucas many years earlier, when his first Star Wars debuted in the late Spring of 1977, it would go on to earn some $461 million in the U.S. alone, surpassing 1975’s chum-fest Jaws as the highest-grossing film of all-time (up to that date). Making a massive impact, it would go on to win 10 Academy Awards; be selected as part of Library of Congress’ National Film Registry; and have its soundtrack placed into the National Recording Registry in 2004.

Today, the cultural impact of Star Wars is without debate: it has spawned an empire unto itself over the past forty years, still going strong with the recent releases of 2015’s Episode 7, Star Wars: The Force Awakens, a film that serves as an extension of 2016’s Episode 4 Rogue One: A Star Wars Story. That in mind, after all this time, what could possibly be left to say about the film that started it all? Well, nothing that has more than likely not been regurgitated before, but Star Wars enthusiast simply can never get enough.

Allegedly, there are various versions of the story behind the development of Star Wars. Originally slated for a Christmas 1976 release, production delays pushed the release date back into summer 1977, in hindsight a brilliant move, paving the way for the summer blockbuster of the future. That said, when it was finally released, it was like a bomb had gone off where everyone in the world would hear about the film. In fact, it would go on to be one of the biggest cinematic events to happen in the world then, and it is still going strong to this day.

It is hard to imagine, but no one knew what Star Wars was or even who most of the actors were at that point; most people paid admission to see it because their kids wanted to watch the space epic. Even the film’s initial introduction adds to the confusion, because the audience is thrown in the middle of Darth Vader’s ship in hot pursuit of Princes Leia Organa, gracefully played by the late Carrie Fisher (Star Wars: The Force Awakens 2015, Fanboys 2009). Vader finally catches up to Leia’s ship, boards it, and takes everyone’s lives until her ultimate capture.

From there, viewers move on to the planet Tatooine, where our hero, Luke Skywalker, played by Mark Hamill (Star Wars: The Force Awakens 2015, Batman: The Animated Series 1994), a character that most teens could see as themselves for many different reasons, but, the best one to point out is that he was angsty as hell. It is good to know that even a long time ago in a galaxy far, far away there are still angsty teenagers. He was a kid that wanted to get out of his dull home (planet) and see the universe and all of its wonders. 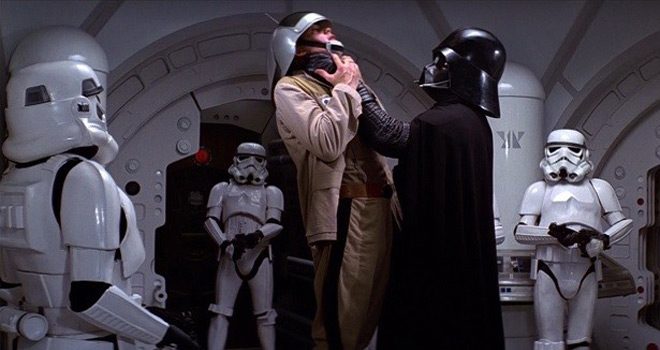 Skywalker gets to do just that after he meets former Jedi Obi-Wan Kenobi, played by Alec Guinness (Great Expectations 1946, Lawrence of Arabia 1962). After realizing that Luke has nothing left on Tatooine after his home is destroyed and caretakers are murdered, he and Kenobi search for a pilot to get them out of Tatooine and to help rescue the Princess from Vader. It is then where they meet the most charismatic character in the entire series, Han Solo, played by Harrison Ford (Blade Runner 2049 2017, Raiders of the Lost Ark 1981). Together, the three, along with Chewbacca and the two droids, R2-D2 and C-3PO, make their way to the Death Star and rescue the princess, not without sacrifice. From there, the group goes to the Rebel base in Yavin 4, where important Intel has come forward on how to destroy the Death Star.

All in all, the gang destroys the Death Star and the universe is saved from the empire… Or is it…? The story of Star Wars simply did not end there, it spawned 2 sequels and 3 prequels, which are definitely worth watching to get a grasp on the whole story. Showing there is still a demand, a new trilogy kicked off with Star Wars: The Force Awakens, which gives a whole new generation the ability to see this massive new story from the ground up, like their parents did when the original trilogy came out.

Speaking about legacy, Star Wars literally launched its own universe. A universe with an endless amount of reading material, like the expanded universe novels, which give fans an even broader look at the universe as a whole, linking events that the average consumer would know to new planets, characters, androids, plot points, etc… Well, maybe one likes reading, but still misses illustrations? Good news, in 1977 Marvel Comics published Star Wars comics, a series that would last 110 issues until 1986. That specific series gave fans much more fleshed out versions of the characters, they were also given a chance to really see the world through each of the characters eyes on a monthly basis, rather than having to wait years for the next film.

After Marvel’s run ended, it would be another five years before more comics would be published, and that honor fell on Dark Horse, who was really making a name for themselves with their talent pool and they types of licensed books they were publishing. Dark Horse took a different approach to writing the comics, instead of following the main characters and their day to day lives, they decided it would be better to come up with “What If,” stories, like, “what if” Luke was actually evil? Not only that, but they also shed light on the rest of the universe with books like, Star Wars: The Jedi Academy, Star Wars: Darth Maul, Star Wars: Knights of the Old Republic, and Star Wars: Qui-Gon and Obi-Wan: Last Stand on Old Mantell.

Beyond this, who can forget the endless merchandising that came with Star Wars. From toys to the aforementioned comics, to everything in between, some may say Star Wars was the first film to really capitalize on such matters, setting the way of the future for big time movies. There was not a kid who grew up between 1977 into the mid-80s who did not have at least one Star Wars action figure, and they probably still do today. 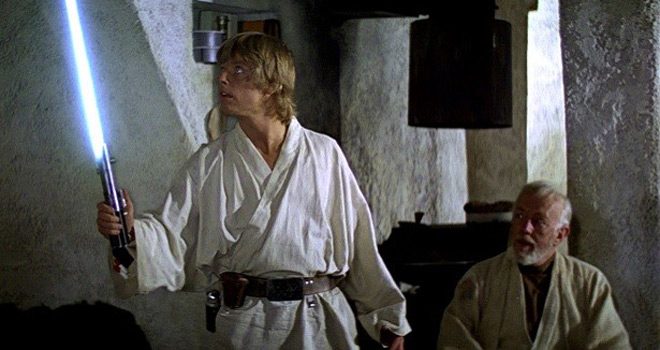 Consistently remaining in Pop culture, Star Wars has been referenced and adapted in various different formats. In the world of spoof comedy, 1987’s Spaceballs, co-written and directed by Mel Brooks stands out boldly. Although, it was not a direct spoof of Star Wars, even though it did incorporated a ton of elements from that film into its jokes and characters. In 2007, Seth Green’s 15-minute claymation show, Robot Chicken, parodied Star Wars with a set of jokes that revolved around the film. In fact, Robot Chicken: Star Wars would become so popular that two more specials spawned out of it. In the same vein, also in 2007, Family Guy also had an opportunity to parody the film, this time it would be a more faithful adaptation. The hilarious episode, Blue Harvest, revolved around Peter telling and acting out scenes from A New Hope, while the cast would act out the flash backs.

One could go on for days with trivia or facts surrounding Star Wars. This story, a space opera, an undisputed cultural phenomenon called Star Wars is the product of one man’s love for storytelling. It is something that will be spoken about hundreds years from now and all began forty years ago thanks to George Lucas. 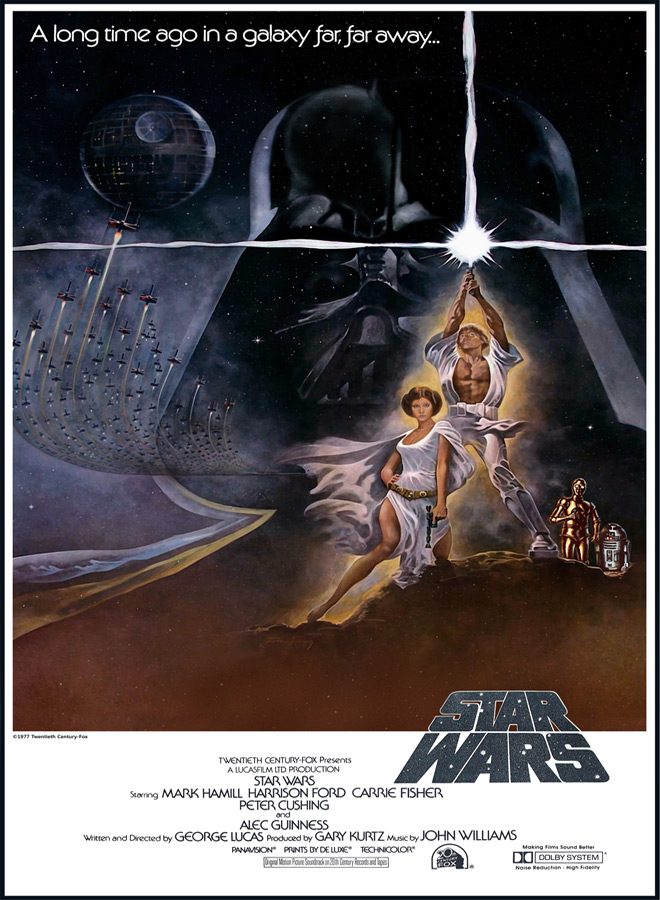