Like a sonic super nova, Starset has officially exploded on the scene, seemingly entrancing anyone who dares to listen. As much acclaim this band has garnered recently is mind blowing considering that vocalist/songwriter Dustin Bates only started the project in 2013, yet here they are already infecting every major radio station worldwide. This is not your usual modern band breaking through. Their topics of science, politics, and technology are by far some of the most advanced amongst their current musical peers. This however should be as no surprise considering Bates’ background. How many front men are PhD candidates in electrical engineering while engaging in research at the US Air Force and teaching at the International Space University? Our guess is not many. One would think this leaves little time to pursue a career in the likes of music, but Bates’ journey already started with his previous band Downplay who signed with a “little” label one may know as Epic Records. Frustrated with the corporate machine, Bates’ began his endeavor that is sure to have Epic looking back on their decision to let talent slip away with nothing short of guilt. While the former label reenacts scenes from the usual heart break films eating ice cream and getting prospective from Dr. Phil, Bates and company are forging ahead with their debut album Transmissions.

Breaking new ground in this day and age is a rather hard accomplishment. In fact, some would say it is damn well near impossible. Starset obviously discarded this mindset when putting Transmissions together. From the instant “It Has Begun” creeps through the speakers one is carried off on a stream of melodies entrancing the listener with Bates’s rather soft voice. Without warning the lullaby gives way to hard hitting strokes of guitar crescendos to a much heavier vocal pattern. While the audience is trying to catch their breath the album marches forward with the current track burning the request lines, “My Demons”. The very intro to this song demonstrates a prominent feature and highlight to this album, the band’s unique mood setting orchestral arrangements. The track features almost haunting verses that, while could frighten some, will engulf the senses for others. This album does not come without faults as well. At times certain tracks almost mirror artists such as Linkin Park and AFI (circa Decemberunderground 2006), an easy trap to fall into these days. Perhaps this is due to the band being so fresh. They are still seeking to forge their own signature sound. The highlight blows right through with the track “Rise and Fall” which features not only elements of melodic hard rock and hypnotic keyboards, but also demonstrates just how brutal Bates’ voice can really get.

If this is foreplay for Starset, just imagine what happens when the heavy petting gives way to the main attraction. Their music could easily stand to be the soundtrack to major soundtracks with thought provoking lyrics and addictive compositions. One can only imagine what their live experience will bring, if even half as psychedelic as the album, their fans are in for one hell of a ride. Starset is on a crash course into your ear drums and are sure to inspire while thirsting for more. As a great freshman release, CrypticRock gives Transmissions a well deserved 3.5 stars out of 5. 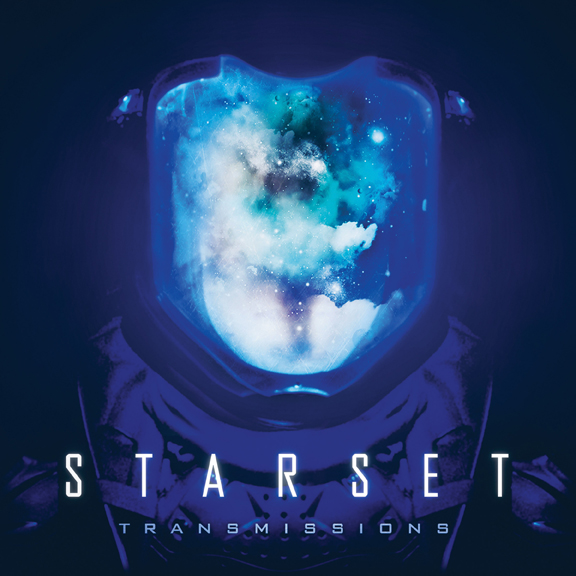