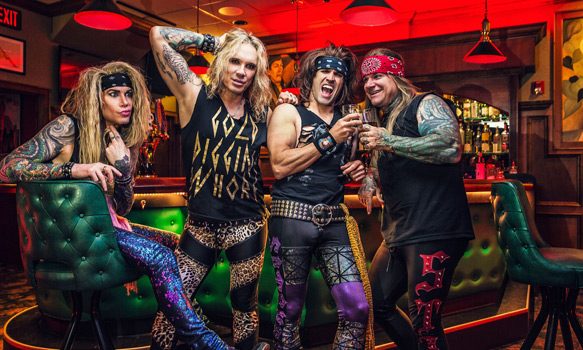 When it comes to Steel Panther, you either get the joke or you do not: they are not a band you can explain. Taking Glam Rock to the utmost extreme and making Spinal Tap look completely banal, Steel Panther are ridiculous fun for those who get the joke. With only four albums to their credit since the band’s inception in 1997, they are not the most prolific band; however, we must appreciate that their duties to their hordes of groupies come first. Despite being exhausted from their amorous adventures, Steel Panther have recently found the time to release their new studio album, Lower The Bar, on March 24, 2017 via Open E Entertainment and Kobalt Label Services.

This raunchy bunch is led by Michael Starr (Ralph Michael Saenz) on vocals and acoustic guitar, with Satchel (Russell John Parrish) on guitars and Lexxi Foxx (Travis Haley) on bass. Korn’s Ray Luzier played the part of Drummer Stix Zadinia for a short time – though, since 2003, he has been the alter-ego of Darren Leader. The foursome debuted with Hole Patrol in 2003, but it was 2009’s Feel The Steel that really broke their success. Since then, they have successively grown their success and, most bizarrely for a spoof/parody band, they have even spawned a number of tribute bands.

Lower The Bar, as an album title, serves as a warning to listeners: you need an open mind to appreciate these tunes and, this time, even the world’s best limbo dancer is going to have a hard time making it under this bar, it is that low. If you judge them on musicianship, you must admit that this is a band who can truly play, have great creativity, and produce innately listenable and enjoyable songs. What makes the band so special, however, is their 1980s Hair Metal/Glam personas with their obtuse sexuality. Where Mötley Crüe go for innuendo, Steel Panther write in plain language with giant capital letters: this is pure filth, musical porn, and it is fantastic; an antidote to the seriousness of life and an escape to the depraved side of Rock-n-Roll.

Their fifth overall studio album, Lower The Bar does not hold back even a smudge. The very first song, “Goin’ In The Back Door,” is a raucous celebration of anal sex. Characterized by high-pitched, extravagant vocals and blatant x-rated lyrics that leave little to the imagination, this is not the band to choose if you are easily offended, under 18, or a nun. “Anything Goes” is a simple shopping list of every twisted, kinky idea wrapped up as a energetic Rock number. It is followed by the amusing “Poontang Boomerang,” which is as offensive as it is funny. Truth be told, you know you should be appalled, but you cannot help but laugh at the audaciousness!

“That’s When You Came In” is the sentimental power-ballad that out-sleazes all other power-ballads. A ballad about groupies and blowjobs, but done just as if it was a typical love song, you can’t help but get hooked into the aural passion. This is followed up with a comical look at the lifestyle of this Los Angeles band, “Wrong Side Of The Tracks (Out In Beverly Hills),” which mocks Steel Panther while channeling their inner Dokken. The moody and dark “Now The Fun Starts” is a commentary on Bruce/Caitlyn Jenner and transsexuals. Needless to say, the lyrics are highly-controversial and completely inappropriate, but that is to be expected and their fans would expect nothing less. After all, Steel Panther aim to shock!

“Pussy Aint’ Free” debates the differences between paying for a hooker and paying for things for a girlfriend; Steel Panther concludes, accordingly, that there is no difference and their lyrical absurdity proves that they just might have a point. A bitter end to a relationship is the subject of “Wasted Too Much Time” and a topic to which many can relate. With excessive swear words and far less diplomacy, the brilliance of this track is its brutal honesty. It is followed by the self-mocking “I Got What You Want.” Just when you begin to think that the vocal theatrics cannot possibly go any higher, Starr hits a scream that is so off the charts it is very likely only dogs can hear this portion of the track.

Where most musicians would brag about 12 inches, Steel Panther are all-too-proud to present their 5.5 inches! Perhaps they truly do believe in that old adage: ‘It’s what you do with it that counts.’ “Walk Of Shame” lowers the bar another notch with more blowjobs, but now for the elderly. Lyrically, Steel Panther tread down roads that should never be explored and yet give hope that sex does not always have to end at menopause. Lower The Bar concludes with a cover of Cheap Trick’s “She’s Tight,” that features Frontman Robin Zander himself. It is a perfect fit with the band’s original material and a wonderful collaboration between Zander and these reprobates!

It is hard to ignore the respect that Steel Panther have garnered within the music business, born from the many writing and recording partnerships that the band have forged throughout the years with noteworthy musicians ranging from Slipknot’s Corey Taylor to Avenged Sevenfold’s M. Shadows. For all their fun and frivolity, beneath Steel Panther lies a core of four excellent musicians who command the adoration of their peers.

It is true that Steel Panther are a guilty pleasure that you simply cannot resist: full of fun, debauchery, and pure escapism from the banality of the day-to-day. While they are not for everyone, those who ‘get it’ will love Lower The Bar, completely and utterly. For a band who take the taboo and make it socially-acceptable and sonically fabulous, CrypticRock gives Steel Panther’s Lower The Bar 5 out of 5 stars. 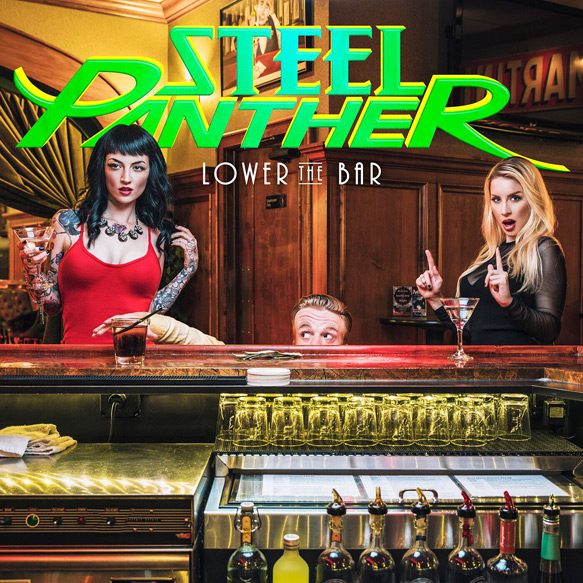