There is the old fashion traditional American dream; a wife, nice home, good job, children, dog, and father who knows best. Too bad sometimes father is a psychopathic serial killer; such is the concept behind the chilling 1987 Thriller The Stepfather. 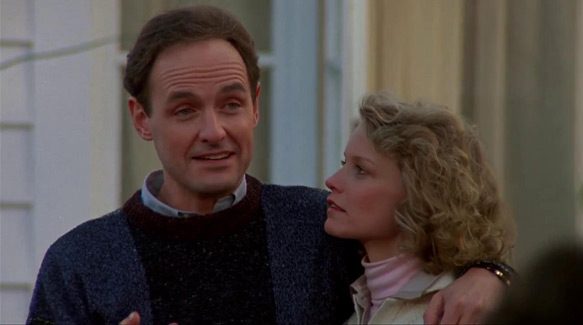 A story written by famed Crime Fiction Novelist Donald E. Westlake (Payback 1999, Parker 2013), along with Brian Garfield (Death Wish 1974, Hopscotch 1980) and Carolyn Lefcourt (Stepfather II 1989, Stepfather III 1993), The Stepfather had the foundation of solid writing behind it. Unfortunately, the project received little interest from production companies, thus taking nearly ten years to finally get off the ground before being picked up by ITC Productions.

Intrigued by the split personality character of the stepfather, the development of the script continued, Producer Jay Benson (Ironside series, The Temptations 1998) came on board, and soon after, Director Joseph Ruben ( Sleeping with the Enemy 1991, The Forgotten 2004). Finally, after taking a long road to the silver screen, on the weekend day of January 23, 1987, The Stepfather broke into theaters.

Different than other Horror films of the time, The Stepfather delved more into character development, rather than the atypical Slasher. Something the writers, producer, and director all were open to, they universally envisioned the story to play out more than just another film about a guy with a knife.

Thankfully, it all worked out, and even while being put together on a relatively small budget film, The Stepfather did exceptionally well. Drawing an estimated $260,587 on the opening weekend, it was also well received by critics/audiences, making it a unique Horror film from the era to look back on three decades later.

The story revolves around a middle-aged man by the name of Jerry Blake (Terry O’Quinn: Primal Fear 1996, Lost series) who is unassuming, relatively pleasant to be around, and dedicated to the portrait American family. Unfortunately, there is more than meets the eye with Jerry. With a dark lurking just beneath the surface, he conceals a murderous side from others around him. Split personality or psychopathic, the mystery behind Jerry’s actions are what make them so terrifying. 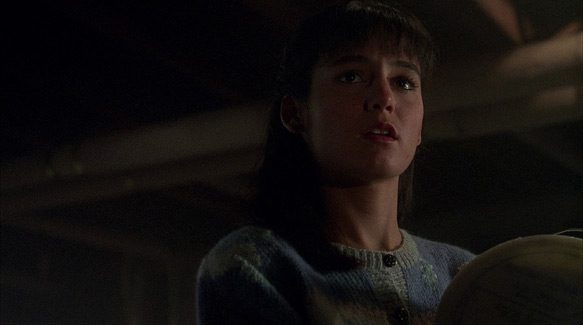 Immediately opening with Henry Morrison, soon to become Jerry Blake, a bearded man trims his hair and transforms into a shaven, clean-cut look. Offering the audience not much to be suspicious about just yet, the man exits the bathroom with a suitcase, puts away some toys in a chest, before proceeding down the stairs.

Naturally one would think the good family man would next be heading off to work, but the walls down the staircase are dressed with bloody hand prints. Setting up for the ultimate shock, soon the camera pans to a massacred family lying on the livingroom floor. Exiting calmly, the cold, calculated character walks out whistling, heading off to a new life, in a new town, with a new family.

Setting the stage for a murdering spree, The Stepfather contains itself from following a typical Horror film plotline. From here, the character of Jerry Blake is developed more while he builds a life with his new wife Susan Maine (Shelley Hack: Charlie’s Angels series, Troll 1986) and stepdaughter Stephanie Maine (Jill Schoelen: Cutting Class 1989, Popcorn 1991).

Nearly fooling every single person that crosses his path, including Susan, a suspicious Stephanie has an uneasy feeling for her new stepfather. Natural for a teenage girl who lost her father only a year earlier, she is now dealing with her mom living with a strange man. A man who expects her to call him dad and treat him as such. Uncomfortable with the entire arrangement, she confides her troubles with a caring psychiatrist, Dr. A. Bondurant (Charles Lanyer: Die Hard 2 1990, The Astronaut’s Wife 1999).

With the key characters storylines building slowly throughout the film, the tension is plentiful and the atmosphere is eerie. There is intrigue surrounding all involved, but like any good Thriller, not too much information is revealed. Will Jerry Blake finally find the right family situation he had always dreamed of, or will something set him off to slaughter yet another innocent family? 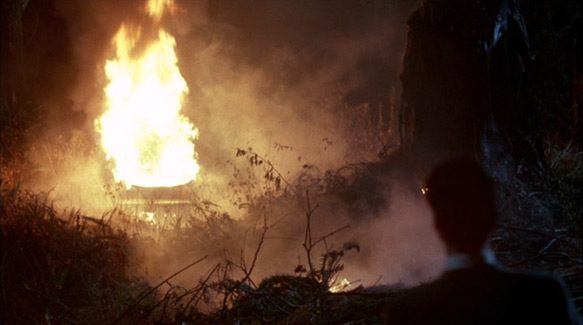 Making the tale of The Stepfather even more creepy, is the fact that it was inspired by a true story of mass murderer named John List. On November 9th of 1971, List killed his wife, mother, and three children in their Westfield, New Jersey home, then disappeared.

List was a successful accountant who had recently been laid off, but continued to go through the motions of leaving for work daily, leaving his family unsuspicious. True life horror, List slaughtered his entire family and went off the radar for nearly two decades where he assumed a new identity and remarried elsewhere.

This type of serial killer story was not very common in film at the time, as most Horror films worked mostly with masked killers, the supernatural, and creatures. In this respect, one can look at The Stepfather as having paved the way for a new wave of Horror cinema in the late ’80s, along with others such as 1986 films Henry: Portrait of a Serial Killer and Manhunter.

At the center of bringing the terror of The Stepfather to life was Terry O’Quinn, portraying the character flawlessly. O’Quinn’s performance was unsettling, frightening, and believable. It was so good he was nominated for both a Saturn and an Independent Spirit Award. He was not Freddy Kreuger, Jason Voorhees, or Michael Myers, his character was a real life boogeyman. The best part of it all, O’Quinn was reportedly an extremely pleasant, acoustic guitar strumming man on set, but once the cameras began to roll, he turned it on instantly.

As for the rest of the actors/actresses, they were not big name stars, but that was irrelevant to their effectiveness and talents. Perhaps this fact made their characters that much more believable. Often when a film casts a well known face, the viewer already has a preconceived notion of what to expect. That in mind, Shelley Hack did a sensational job of portraying a sweet, caring mom who just wants her family to heal after the loss of her husband. Then there was Jill Schoelen’s Stephanie, which on the exterior seemed like an average teenage girl, but was in fact much wiser and tougher. Quite likeable, Schoelen’s Stephanie was the perfect nemesis to O’Quinn’s Jerry, seeing right through his unstable personality. Her work was so good that she was nominated for Best Young Actress in a Horror Motion Picture at the 1988 Young Artist Awards and won the award for best actress at the 1987 Sitges – Catalonian International Film Festival. 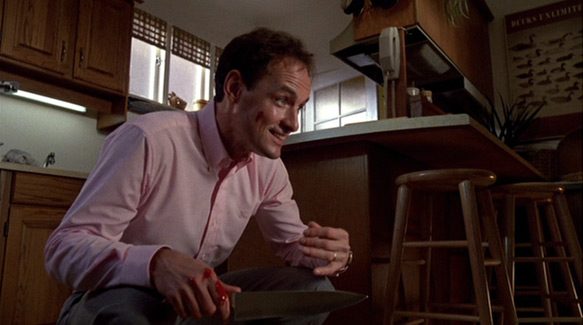 As for Ruben, he almost did not move forward working as The Stepfather’s director because he feared it would it may go down the Slasher path. Thankfully, he stayed on and was granted freedom to enrich the characters. When it was all over his work earned him the Critics Award at the 1988 Cognac Festival.

An honor Ruben earned from his thoughtful directing, additionally, he brought on Cinematographer John Lindley (Field of Dreams 1989, Pleasantville 1998) to give the film the look it had. That said, the look of The Stepfather was extremely vital to the effectiveness. It was supposed to paint a picture-perfect visual of an American family and a beautiful suburban setting. Shot on location up in Vancouver, British Columbia, Canada and Seattle, Washington, seldom was the Northwest a regular filming location at the time. A refreshing backdrop, opposed to Southern California or New York, the shooting spots certainly added a texture to the story.

In the years since, The Stepfather has remained a fan-favorite and, thanks to Shout! Factory, received a DVD in 2009 and Blu-Ray edition in 2010 with decent supplemental interviews. The film’s 1989 sequel, Stepfather 2: Make Room for Daddy, was a direct to video release, and while not as intense as the original, was still a decent watch.

Keeping The Stepfather’s legacy alive, in 2009, Screen Gems released a remake of the movie starring Dylan Walsh (Nip/Tuck TV series, The Lake House 2006) as the stepfather. Changing the characters names, but staying relatively close to the original plot, for a reboot, it was not terrible. Although, nothing can compare to the terrifying and edge-of-your-seat feeling provided by 1987’s The Stepfather, even after thirty years. 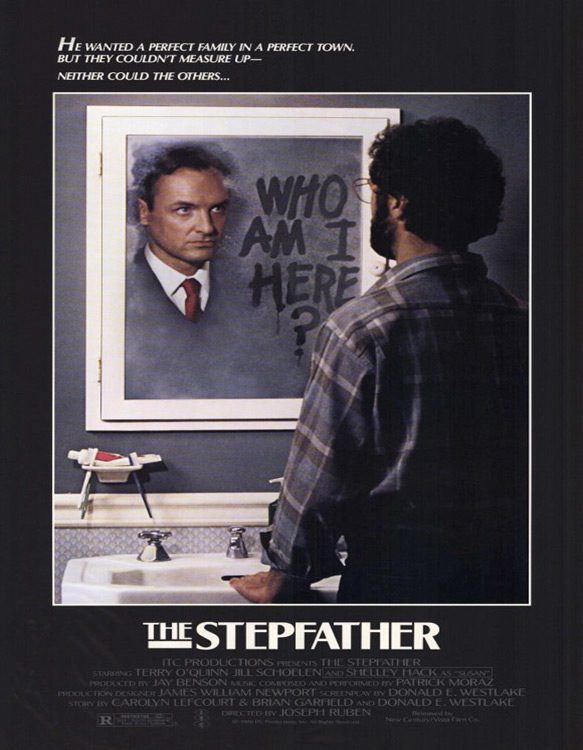