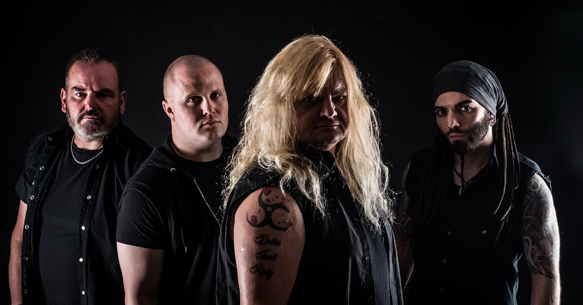 Throughout history, British culture has been on the forefront of the creation of Rock-n-Roll and Heavy Metal. Both genres that define popular music, one really unique and great era that spawned from England was the dawn of the New Wave Of British Heavy Metal. Amidst this movement came bands like Angel Witch, Diamond Head, and Girlschool, along with Grim Reaper. Begun by Guitarist Nick Bowcott, Vocalist Steve Grimmett keeps the band’s legacy alive all these years later in the form of Steve Grimmett’s Grim Reaper. Nearly two decades after Grim Reaper’s 1987 album, Rock You To Hell, Grimmett offered fans their first taste of the reaper on October 14, 2016 with the release of Walking In The Shadows. The album cover features a pale blue, hooded skeleton, grim reaper style character with some painterly skulls in the background, because what else would be as ideal? But does it live up to the expectations of those who have waited all these years?

Containing twelve songs, with the title track oddly placed second, Walking In The Shadows has a familiar, yet creative, catchy riffage with the semi typical sounding lyrics and vocals of a style that influenced others to come after Grim Reaper. This in mind, there is definitely an ’80s vibe to the music, even though it is 2016, and this does not prove to be a negative trait. Furthermore, for a band with such a dark name, the music does not quite reflect that as much as the lyrics do, but that is all part of the fun.

Opening with “Wings Of Angels,” it pulls in the listener’s attention and carries the riffs and beats to a steady stream ending in bliss. Later on, “Reach Out” is a stand out  favorite with an intense guitar mix and probably the best vocals and lyrics on the album. Then there are moments in others tracks such as “I’m Coming For You,” which contain a slightly harsher pitch, that while even though is a characteristic of Steve Grimmett’s voice, is not always received positively. Furthermore, “From Hell” gets more manly in vocal style and contains darkness while featuring some badass guitar solo artistry as well. Then the album dives head-first into the sea of cheese with the lyrical puns found in “Call Me In The Morning” that seems to be an over three minute long song written about a hangover, yet it somehow manages to offer some stellar riffs involved to balance the boat.

At midpoint of Walking In The Shadows, it gets back to the basics with “Rock Will Never Die,” a piece that has some organic and stylistic qualities, despite the thousands of Rock/Metal songs that have ridiculously similar lyrics. The plus side is of it all is the listener may forget this is a new album, and not released in 1979, making it a great concept and an even greater anthem. At this point in the album, it is easy to see there is a definite weaving in and out between power ballads, cheese Metal, and straight, classic riffage, NWOBHM style. Having this variety is the spice of life of Walking In The Shadows and provides the listener with a greater overall experience.

Speaking of power ballads, “Thunder” is one of the strongest in this category. Although, it is a touch on the unoriginal side and lacks in the creativity of much of the other tunes, but all is not lost because it makes up for that with Grimmett’s voice. Thereafter, “Now You See Me” is another well-written and catchy anthem, lyrically fun while again building attention with the unique tempo, structure, and riffage. This is before “Blue Murder,” which is another hit with its fast and furious nature. Finally, the album concludes on the same fun, catchy, and furious side that does not go to extremes on “Come Hell Or High Water.”

Fans of Steve Grimmett’s Grim Reaper and followers of the New Wave Of British Heavy Metal scene are sure to take away a nostalgic and joyous feeling after subjecting themselves to the highs and lows on Walking In The Shadows. It is an album full of that classic and slightly Power Metal riff-heavy sound that is an integral part of the making of New Wave Of British Heavy Metal. With Grimmett fairly adamant about touring with Walking In The Shadows under his belts, it is advised to catch them live since it is always uncertain what surprises will be unleashed in that setting. After a lengthy debate, CrypticRock gives Walking In The Shadows 3.5 out of 5 stars. 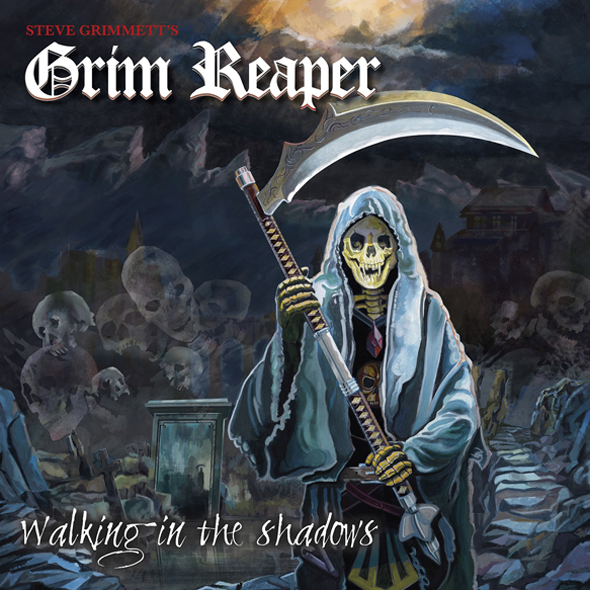