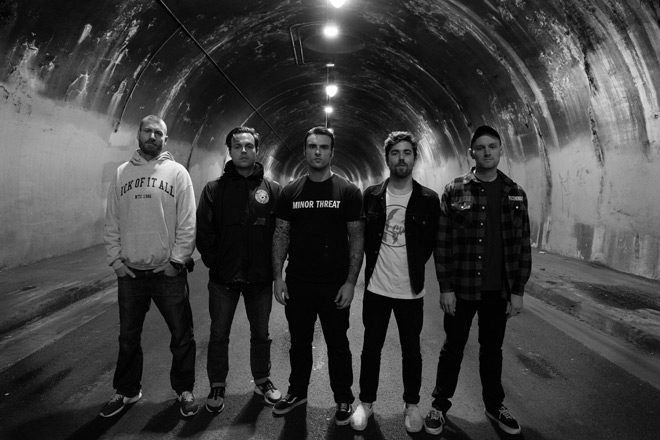 Ready to deliver a devious dose of poisonous melody to Hardcore alongside their always keen perceptiveness, Stick To Your Guns return on very lucky Friday, October 13th with True View through Pure Noise Records.

Stick To Your Guns (abbreviated STYG) hail from Orange County, California where the sun shines bright and creates a brilliant insight. Vocalist Jesse Barnett formed the group around 2003 while still in high school, waiting to graduate before pursuing world domination.

With their debut disc, 2005’s For What It’s Worth (which would be released by Century Media Records in 2007), the ball was set into motion, and over the next ten years, despite a myriad of lineup changes, four albums would follow – from 2008’s Comes from the Heart to 2015’s Disobedient. Relentless touring spread the band’s name and message – leading to awards, fandom, and a fabulous cover of the superbly talented Florence + The Machine – and ultimately bringing them to share stages with everyone from Every Time I Die to the joyously reunited Eighteen Visions (who Guitarist Josh James currently plays bass for, as well).

Perhaps, above all things, Stick To Your Guns – Barnett, Guitarists Chris Rawson and the aforementioned James, Bassist Andrew Rose, and Drummer George Schmitz – are a band who are much beloved not just amongst fans but by their fellow musicians as well. In our dog-eat-dog world, it is an impressive compliment to one’s character when they inspire without boundaries! With their sixth studio release, True View, the quintet continues to motivate with a lucky batch of thirteen new tracks. Produced by Derek Hoffman (Silverstein, Seaway), this collection marks the band’s first release for their new label, the aforementioned Pure Noise Records.

True View opens with a voicemail that appears to be someone’s mom offering loving and thoughtful snippets of advice that bleed into “3 Feet From Peace,” pummeling Hardcore layered alongside melodic guitar-work. It builds a titillating tension that flows right into “The Sun, The Moon, The Truth: Penance of Self,” a powerful, multi-layered presentation that provides an impressive dropkick to the eardrums. Meanwhile, the lusciously addictive choruses of first single/video “Married To The Noise” make for a truly anthemic homage to Barnett’s second home, the Hardcore scene (“I found a place to belong”). “This is not an apology or an admission of guilt / This is a realization of how I destroyed all the things we’ve built” is the haunting, heartbreaking confession at the center of the blistering “Delinelle,” where emotion lies bloody and raw in all its sincerity.

There is an impressive musicianship throughout the various layers of Stick To Your Guns’ sound; and while they are clearly grounded in heaviness, these boys can strike up a great melody too. “Cave Canem” (Latin for “Beware the Dog”) proves their infectiousness in spades, with sing-along worthy choruses that create a serious hunger for more. “This is the last and final warning / I hope you hear us now” will be the perfect chant for your next live Stick To Your Guns experience!

Melodic Hardcore at its absolute finest, “56” pits poetic lyrics against high-reaching melodies, while there is a desperate soliloquy (“Will I allow what is expected of me to dull the sharp edge of my life?”) whirling around inside “The Inner Authority: Realization Of Self.” It couples well with the vicious promise that, no matter what they say, “You Are Free,” and the true power of you cannot be taken away. Consider this your daily Zen proclamation for Hardcore kids!

Stick To Your Guns continue on their self-aware journey with “Doomed By You,” a reminder to never let others drag you down or seal your fate. It is an astute, somewhat vital observation to make alongside soaring, addictive choruses that you can almost see crazy concert-goers crowd-surfing to already! While there is nothing truly unique about punctuating vicious verses with heavenly choruses, “The Better Days Before Me” has a secret weapon: STYG’s sharply mindful lyrics.

Keep self-effacing by remembering the past, never wasting your days, and always striving for something greater are only three key points in this journey through self-awareness. In fact, being aware of one’s self is a big tenant of STYG’s music and, rightly so, this theme continues into “Owed Nothing.” With some of the heaviest verses on the album, this track is a candid admission that no one warrants a chip on their shoulder; we deserve only what we earn and, as a society, we often lose track of this fact. Remember, folks, stay humble!

“Through The Chain Link” begins with a heart-wrenching audio clip of a woman crying: “We gotta get rid of these fucking money-hungry, angry people . . . How can I believe in somebody that killed their own God?” With gut-punching observations of the world around us (“A foundation of shit upon which we salute, blinded by greed”) and a reminder that we all too often remove ourselves and play passive-observer, this might be one of the shortest tracks on True View, but it weighs heaviest. Still resonating with its message, we segue into “The Reach For Me: Forgiveness Of Self,” a track that leans much closer to Rock than anything Hardcore; which is fine: it is superb and ends the album on a brilliant high, reminding us not to wallow in our mistakes but to learn and move forward with self-forgiveness.

Stick To Your Guns are infectious hope coupled with poetic desperation: a lyrical plea to see what is right in front of us and to be better for our newfound observations, knowledge, and awareness. If you can let go and lose yourself in STYG, you will find peace and angst, vicious inspiration alongside an oft slaughtering delivery that is grounded in those insightful, zen-filled proclamations. True View is, therefore, not merely an album but an experience: one that we welcome with open hearts and raised Metal-horns and perhaps a little lotus blossom, too. For these reasons, CrypticRock give Stick To Your Guns’ True View 5 of 5 stars. 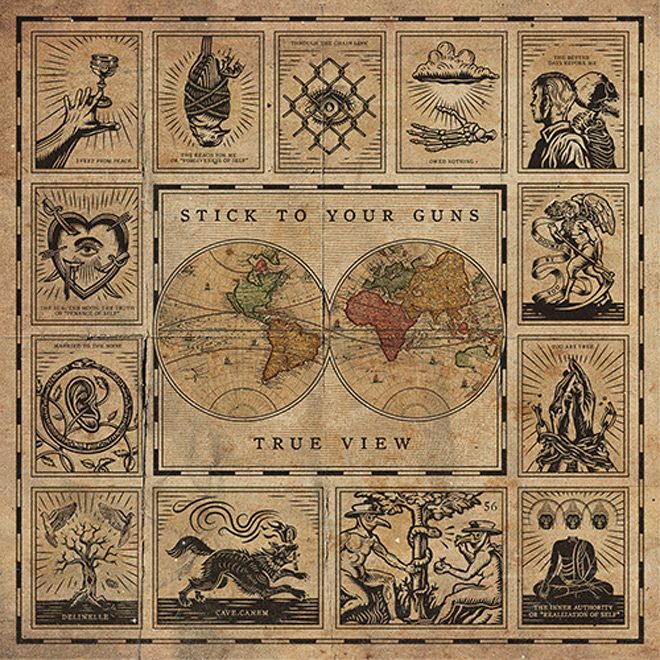