Once upon a time…

No, no, that’s not right, because this isn’t a kissing movie. Defining the 1987 classic, The Princess Bride, is practically impossible. It encompasses so many genres, including Fantasy, Adventure, Drama, Comedy, and Romance, that the adaptation of William Goldman’s 1973 novel of the same name struggled to find its way to the silver screen. After a decade of Goldman trying to find the right person to translate his story to film, Rob Reiner, along with funding from TV giant Norman Lear, finally brought the quirky, unconventional fairy-tale to life. 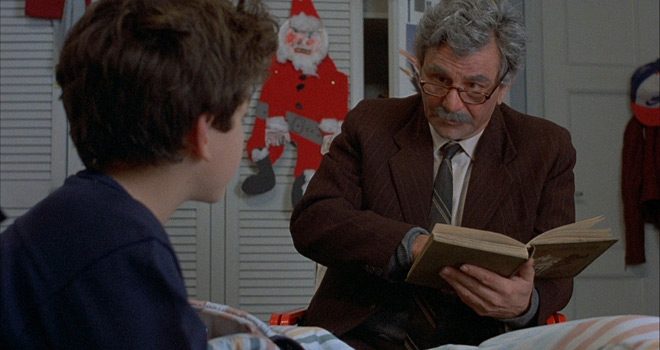 Released in theaters on September 25th of 1987 through 20th Century Fox, the structure of The Princess Bride is a story within a story, written with sharp wit and humor by the novel’s author, William Goldman. Goldman not only supplied a great story but delectable characters with moments and lines that are so memorable, they have been embedded into Pop culture and are still quoted to this day.

Romantic love is the central theme in The Princess Bride, but family love is something we see in the outer story between The Grandfather (Peter Falk: Columbo series) and The Grandson (Fred Savage: The Wonder Years series), as the story is told to a kid that would rather play his video games than listen to his grandfather read a “kissing book.” What he soon finds is an adventure that he and the viewing audience are swept into, ultimately leading The Grandson to ask his grandfather to read the book again.

Anyone who has seen The Princess Bride has most likely watched it several times. It is the type of film that can be viewed by any age group and never gets old. It is a feel-good film with plenty of tongue-in-cheek humor, suspense, as well as excitement, and it is no surprise that audiences continue to adore the story and its characters. Even though the film has been critically acclaimed, it was not a box office hit. The film grossed approximately 30.9 million domestically, but found its success in the home video market, becoming a cult classic.

One of the main contributing factors to the lasting power of The Princess Bride is its cast. Although others were considered for some of the roles, including Colin Firth as Westley and Arnold Schwarzenegger as Fezzik, it is, well, inconceivable to picture anyone but Cary Elwes (The Crush 1993, Saw 2002) and WWF star André the Giant in those roles. Each actor brought something unique and special. Furthermore, there is an undeniable magic that was created in the making of this film. 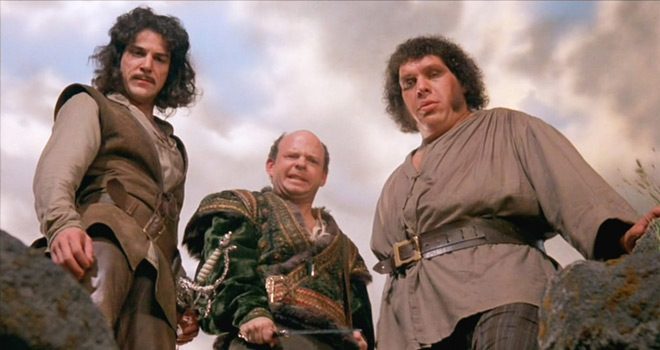 Reiner, known for his work on films such as 1992’s A Few Good Men, was undoubtedly a huge part of that as over the years many stories have emerged of his tenacity in getting every scene right. From the unforgettable swashbuckling sword-fighting scene between Westley/Dread Pirate Roberts/Man in Black and Inigo to doing voiceover work and losing his voice to get the grunts and growls just right for the R.O.U.S or Rodents of Unusual Size, there was plenty of hard work and dedication that went into The Princess Bride.

Along with Reiner, the cast also devoted a great deal of time, and in some cases, training, to fully embody their characters. Mandy Patinkin (Homeland series, Criminal Minds series) trained for six months to become Inigo Montoya, the greatest swordsman. His duel at the top of the Cliffs of Insanity with his very worthy adversary, Westley, was a work of art. With four months of training himself, Elwes and Patinkin did such a great job with their sword-fight that it was over too quickly and Reiner decided that the scene needed to be epic and bigger in scale. Ultimately, everyone went back to the drawing board to flesh out the scene and used every part of the set, making it a dance between two masters and beautiful to watch.

Another reason that scene works so well is that both Elwes and Patinkin did all the stunt work themselves at the request of Reiner. There were no stuntmen stepping in for the actors, allowing Reiner to film the scene more realistically, which was not the normal practice at the time. Elwes also suffered various injuries on set, but the audience would never have noticed. A broken big toe that he neglected to tell anyone about, fearing production would need to be shut down, Elwes filmed the scene between Westley and The Princess Bride, aka Buttercup (Robin Wright: Forrest Gump 1994, House of Cards series), after the two tumble down a hill, adjusting to accommodate his foot injury by sitting with one leg extended to avoid weight from being put on his foot. 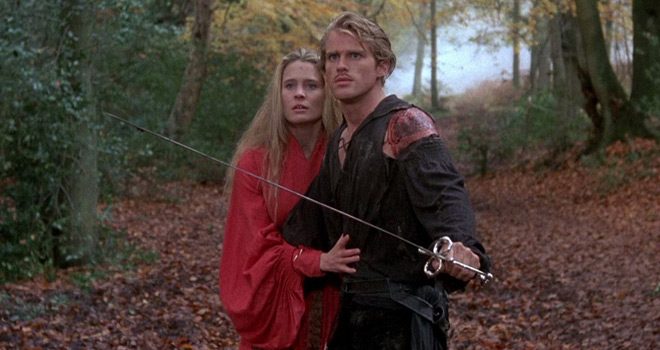 Reiner, not aware of the injury, simply thought Elwes had brought an elegance to the way Westley sat as he spoke to Buttercup. Elwes also suffered an injury when Count Rugen (Christopher Guest: This Is Spinal Tap 1984, Best in Show 2000) hits Westley over the head with a sword handle. Guest was afraid of actually hitting Elwes, but the hit looked too fake. Elwes suggested one hit with more direct contact to make the reaction timing work, but Guest knocked Elwes out and Reiner ended up using that take for its realism.

Although the story of The Princess Bride is about true love, it is never mushy or cheesy. Two regular people fall in love—a farm boy that feels as though he is too poor and must go out into the world to make himself worthy for the woman he loves. Along the way, he picks up numerous skills as the Dread Pirate Roberts and his true love becomes Princess Buttercup. She is not a princess waiting for a prince to save her, but instead becomes a princess in need of saving from an evil prince.

Prince Humperdinck (Chris Sarandon: Fright Night 1985, The Nightmare Before Christmas 1993) has ulterior motives for selecting Buttercup to be his bride. He is trying to ignite a war between the fictitious cities of Florin and Guilder and hires a group of men to abduct Buttercup. Vizzini (Shawn Wallace: The Cemetery Club 1993, Toy Story series), the Sicilian who believes he is the smartest man in the world; Inigo Montoya, the Spanish swordsman seeking vengeance for the death of his father by finding his the six-fingered man who killed him; and Fezzik (André the Giant), the lovable, rhyming, kind-hearted giant are out-mastered and outwitted by Westley. It is both the humor of the scenes and the chemistry between the actors that make it all so fun to watch. 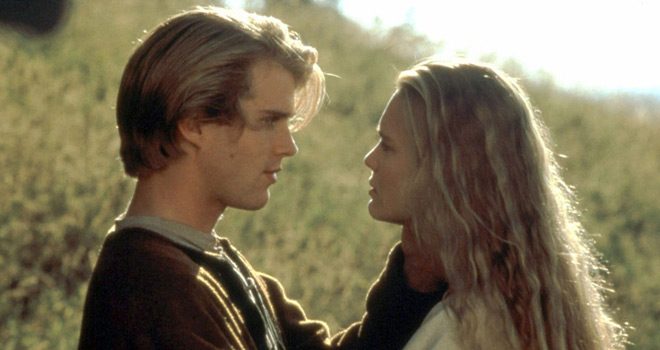 Goldman gave us so many memorable lines that practically the entire script of The Princess Bride is quotable. From “Hello, my name is Inigo Montoya, you killed my father, prepare to die,” “As you wish,” “Mawwiage,” “Inconceivable,” “Anybody want a peanut?,” “To blave,” “Have fun storming the castle,” or listening to the brilliant Billy Crystal as Miracle Max talking about an “MLT,” the list could go on and on. Each line is iconic and beloved by fans. Perhaps some of the best moments, or at least the funniest, come from Billy Crystal and Carol Kane. As Miracle Max and his wife/witch Valerie, they play a vital role in reviving Westley and getting him in a somewhat fighting form to take on Prince Humperdinck. Furthermore, it is the mostly improvisational lines between Crystal and Kane that are pure magic.

Simply put, The Princess Bride has never been duplicated, though some have tried. It is a unique form of storytelling, the way it pokes fun at the conventional fairy-tale story; the perfection of its actors, its script, and great directing prove the stars were in alignment to create a gem of a film. After thirty years, some may believe it would be mostly dead, but it continues to thrive. 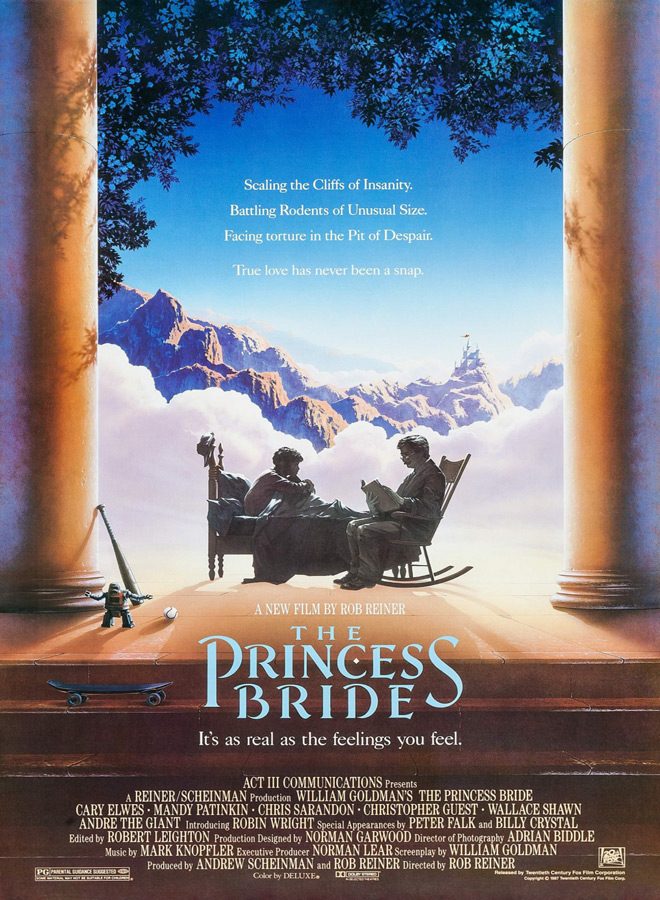