With all the lengthy, hard to pronounce, genetically-modified ingredients listed in the nutritional “facts” on food labels these days, it would be wise for a consumer to also pay close enough attention to the expiration date as well.

Such attention could have saved the lives of the poor saps from falling victim to some very-expired alcohol in the J. Michael Muro (Jim Muro) directed Street Trash, a film so trashy, so outrageous, and so explosively gory, it would make you wonder why it is considered such a cinematic classic among swarms of Horror fans three decades later? 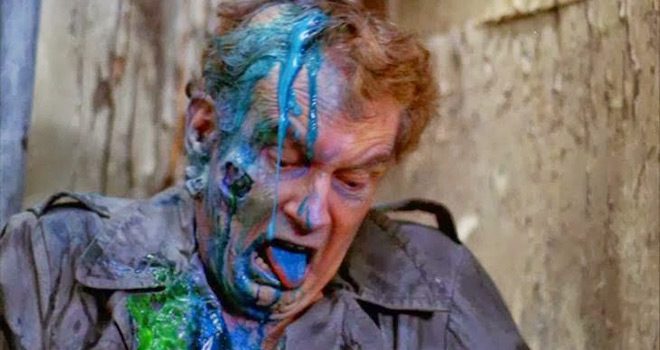 To start, look at what company released Street Trash onto video back in 1987, it was none other than Vestron Video’s sister company Lightning Pictures Inc. Responsible for film such as 1987’s Blood Diner and 1989’s C.H.U.D II, with Street Trash, they let yet another rare gem of a movie out from their bag of goodies.

Winner of the Silver Raven at the Brussels International Festival of Fantasy Film in 1987, and receiving a limited theatrical release, including one in New York City back on September 16, 1987, the second Street Trash begins, the first thing anyone will notice is the amazing camerawork. Every shot, every angle, is as swift and inventive as the last, in how each character stays within frame while the cameras capture every single occurrence of action. It is an impressive feature that surely will not be overlooked.

Another tasty bit of information, Muro is a trained cinematographer/camera operator who later became in his career well-known for his Steadicam work in Director James Cameron’s movies such as 1989’s The Abyss, 1994’s True Lies, and 1997’s Titanic. In addition, Muro not only directed Street Trash, he also used his fantastic camera skills to film a few scenes. Seriously, no matter how goofy the subject matter, there are quite a few serious crew members that were involved in all Street Trash’s departments including famed Director Bryan Singer (The Usual Suspects 1995, X-Men 2000) who was a production assistant.

Speaking of which, one of the most important crew members was Roy Frumkes who wrote the screenplay and produced Street Trash, telling the story of a dilapidated neighborhood in Brooklyn, New York that is overrun with bums, winos, and derelicts, all of whom try to control their own little territories. Naturally, these bums love drinking liquor, and when a store owner unearths a hidden box full of an expired alcohol called Tenafly Viper, he later sells each bottle of it for a dollar to any fool “lucky” enough to afford it. Thus chaos and mayhem pursue! 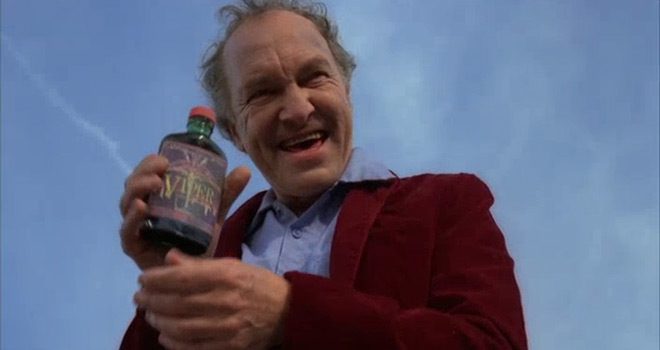 As stated, quite a wacky story, Frumkes wrote some great one-liners within the script of Street Trash, and many scenes are of character interactions that deal with side-splitting put-downs and many crazed, idealistic bum-views. That said, Frumkes also created such a wonderful cinematic vision of a New York at the time, it would make any New Yorker feel right at home. How did Frumkes and Muro capture the mood so well? Naturally they were born and raised in New York themselves.

Before he worked on the infamous Street Trash, Frumkes wrote and directed 1985’s Document Of The Dead, which followed George Romero around behind the scenes of 1978’s Dawn Of The Dead. Funny enough, Frumkes even has a bit part in Dawn of the Dead as the first zombie to be pie-splatted in the face from the biker gang that invaded the mall. Also, remember the underrated 1996 film The Substitute that starred Tom Berenger? Frumkes wrote the screenplay for that before helping to write the sequels soon after. Frumkes is also responsible for the writing and directing duties of the The Meltdown Memoirs, which is a Documentary about Street Trash that took four years to make, and was included in a second DVD release via Synapse Films in 2006.

With an estimated budget of $500,000, inside the darkly comedic, gory-like Horror film is quite a team of SFX artists as well. There was extraordinary Special Make-Up Artist Jennifer Aspinall (The Toxic Avenger 1984, Spookies 1986), who worked alongside Mike Lackey (I Was A Teenage Zombie 1987) to make some of the most unforgettable scenes of melting bodies, dismembered male nether-regions, and blood-buckets full of gory fun. Gross, fun, and inventive, who that has seen Street Trash does not wish they were on set of the film to witness Aspinall make the scenes come to life? Answer, no one! 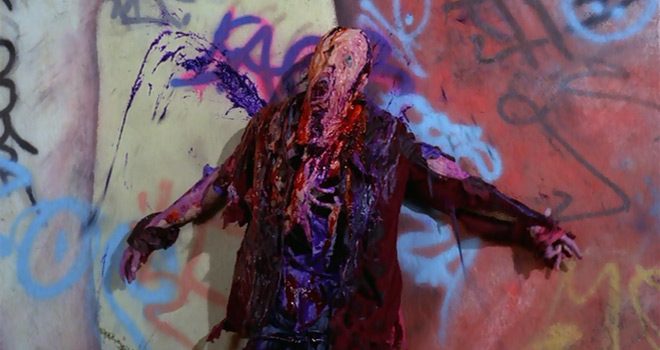 Considered to now be part of a subgenre of Horror called Melt movies, which include Larry Cohen’s 1985 classic The Stuff as well as Greg Lamberson’s 1988 Slime City, Street Trash is depraved fun from start to finish. Over the past thirty years, the outrageous flick has rightfully gathered a lot of “street cred” among Horror lovers for its unapologetic subject matter, its extremely dark satire, as well as crazy-cool SFX filled with ooze, slime, and flying of severed man-parts. There is a landfill growing full of worthless, strewn-about garbage in the modern film world, but with genuineness and heart, nothing will ever look as good and will ever be as welcoming as Street Trash. 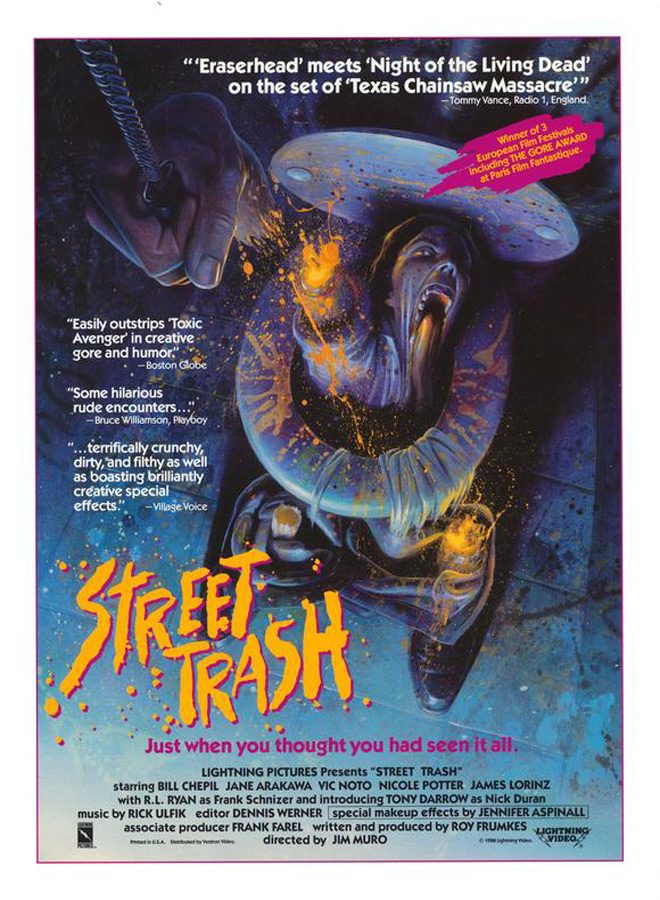