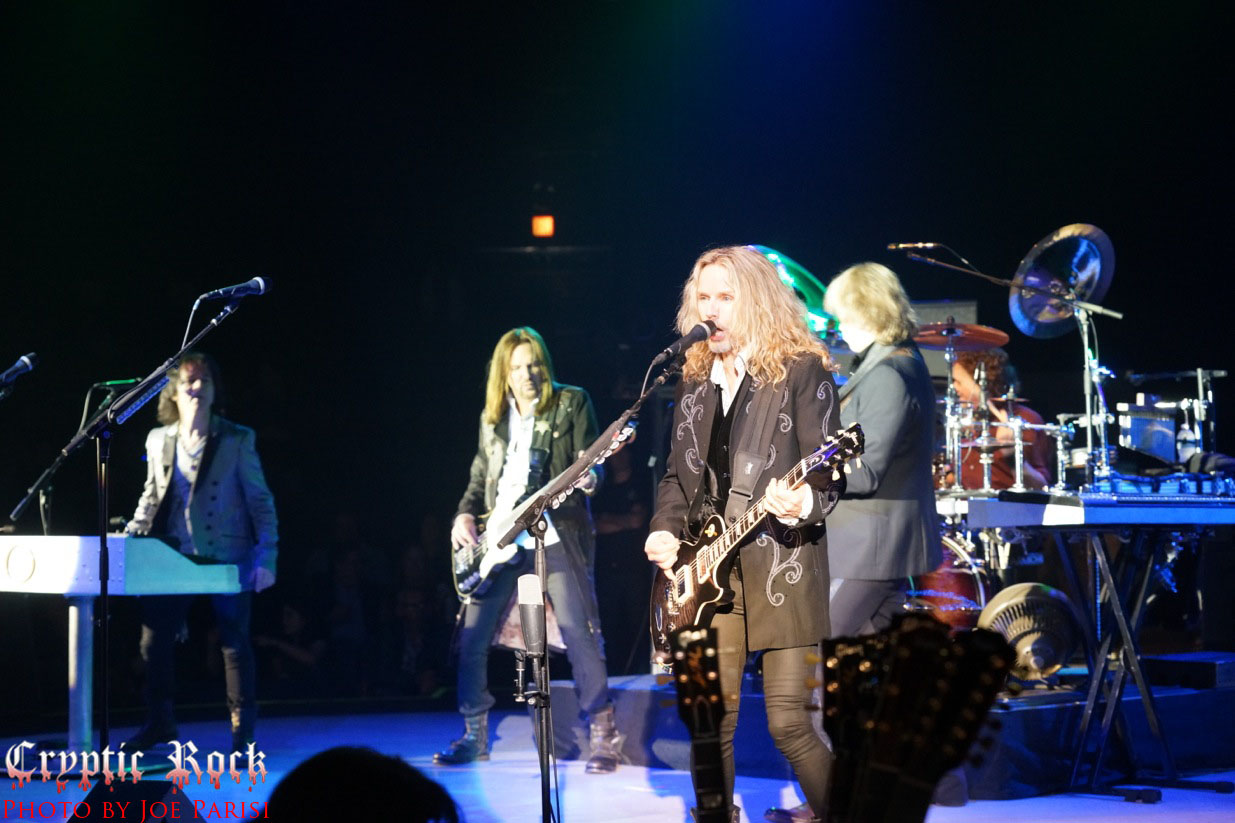 When you think of 1970’s rock n roll a few names pop into your mind and one which leads the way is most likely Styx. Combining a progressive sound with harder rock edge, Styx has achieved much success over the years including 4 consecutive multi-platinum studio album between The Grand Illusion (1977) and Paradise Theater (1981). Over the years the band has sustained success through line-up changes including the departure of Dennis DeYoung in 1999. As beloved and popular with their fans as ever, the current line-up consists of : Tommy Shaw (guitar and vocals), James “JY” Young (lead guitar and vocals), Ricky Phillips (bass), Todd Sucherman (drums), and Lawrence Gowan (keyboards and vocals). On Saturday November 16th, Styx joined up for the second night of a two night stand at NYCB Theatre At Westbury.  This would be a special night with original bassist, Chuck Panozzo, who now plays in the band part-time performing with the band as well.  With the packed theater on the night before, night two would have a large crowd of fans once again to witness a Styx rock n roll show.

The show began with the 1978 hit “Blue Collar Man (Long Nights)” led by Shaw on vocals. Shaw’s voice lifted through the theater while this classic tune resonated with the guitar work of Young and Gowan providing the keys. Gowan was given the spot light in the following track taking lead on the title track off the 1977 album Grand Illusion while playing the keyboard. Gowan put on an amazing performance of the track originally sung by DeYoung and the crowd responded with cheers. Next Shaw broke out the acoustic guitar engaging the crowd stating let’s have a rock show. Shaw also introduced bassist Pannozzo to the crowd which got an emotional ovation. With energy levels high, Shaw and the guys went into “Fooling Yourself (The Angry Young Man)”. The synthesizers sounded magical with Gowan putting on a show spinning around with his keyboard. The set went on with a series of tracks highlighting their impressive catalog including “Lady”, “Light Up”, “Man in the Wilderness”, “Suite Madame Blue”, “Crystal Ball”, and “Miss America”. With the stage of the theater in a round, usually it spins for the performers, but on this evening it would be Styx which would be doing the spinning moving around the stage vigorously making the set that much more entertaining for the audience.

The band appeared in good spirits and after an already impressive set they went into the classic Beatles tune “I Am The Walrus”. The rendition was powerful with Gowan taking the lead on vocals again. Sucherman’s drumming was hard hitting simply paying homage to The Beatles in a perfect classy matter. After the cover track the band went into the 1981 new wave style track “Too Much Time on My Hands”. With the synth bass line throbbing the ground of the theater, fans were on their feet swaying back and forth. Smiles were all around and having already paid homage to The Beatles this time Gowan went into a piano medley of classic rock tracks including “Piano Man” by Billy Joel, “Tiny Dancer” by Elton Jon, “You Can’t Always Get What You Want” by The Rolling Stones, and “Light My Fire” by The Doors. With a crowd of classic rock enthusiasts, this was a perfect addition to the set which segwayed into “Come Sail Away”. Once again Gowan shined taking lead on vocals, soaring high with notes reaching the sky.  With a full range of backing vocals by Shawn, Phillips, and Young as well as strong instrumentation adding to the intensity of the performance, this was an epic closing to the set.

Standing in the aisles, the audiences clapped and cheered for an encore. The band came back out and Shaw thanked the crowd graciously. The 2 song encore was lead by “Rockin’ the Paradise”. The mix of the guitars and keyboards provided for an exhilarating opening leading into a top notch vocal output once again by Gowan.  The evening closed out like a firework show with Shaw singing the hard rocking track “Renegade”. This was without a doubt a spectacular performance with a great range of Styx tunes along with some special surprises.  If you have the chance to see this classic rock band live they will be touring well into 2014. Do yourself a favor and get tickets when they hit your town.