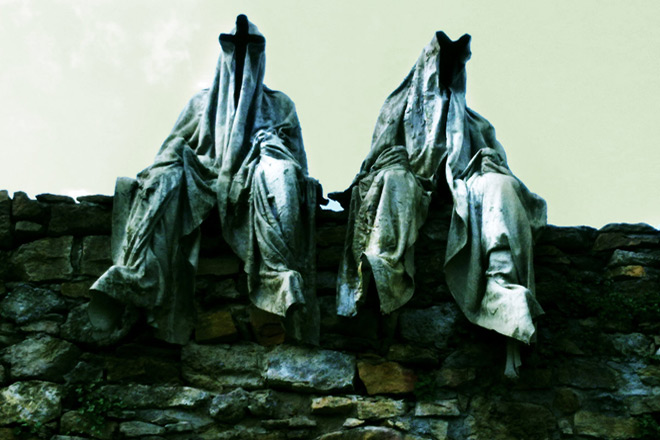 Austria’s Summoning occupy a unique place in the Metal canon, even within the shrunken circle of Ambient/Electronic Black Metal. Established since 1993, they have produced a list of exceptional albums, but until recently, had not released any new material since 2013’s Old Mornings Dawn. Then, on Friday, January 5, 2018, the silence was broken with the release of their eighth studio album, With Doom We Come, through Napalm Records.

As mentioned, their first release in 5 years, the production here is a little rough, even by the genre standards. That in mind, despite almost all instrumentation being synthesized, the resulting vibe walks the line between raw and polished and avoids sounding overworked or stale. With a little effort from the listener, the ethereal landscapes described throughout With Doom We Come can become an imagined reality.

The duo of Richard Lederer (aka Protector) and Michael Gregor (dubbing himself Silenius) space many releases with half-decades or more, so a mere 5 years since their last effort actually puts With Doom We Come right on schedule. The closing near-title track, “With Doom I Come,” has been available for streaming since October, but now fans can indulge in all 8 tracks which run for a little over an hour. With a return to recurring themes of fantasy, battle, and Middle Earth of J. R. R. Tolkien, With Doom We Come makes a welcome addition to the catalog.

The album begins with “Tar-Calion,” a long, slow procession, under which one could imagine armies moving into position to prepare for the battle marches that cover the rest of the album. Guttural vocals pepper the lush background of tight drum marching and synthetic horns. “Silvertine” is the obvious arrival of the battling force alluded to in the opener. Strong vocals are flanked by triumphant horns, mixed with the celebratory neighs of nearby horses, while hazy guitar drones and off-tempo percussion keep a steady pace. The raw lyrics harken to the Black Metal roots of Summoning.

An ode to the legendary wolf of Tolkien mythos, “Carcharoth” is a fitting tribute; long-drawn raspy vocals and brisk trumpets combine to sing the praises of such a historical lupine force. Long periods of vocal dormancy are carried largely by horns as the track clocks over nine minutes. “Herumor” then begins with liberal use of keyboards, and the vocals have changed into something more viscous; clearly the microphone is passed back and forth during the recording process. Ethereal string picking creates a furthering sense of doom, worsened by a near-cultish series of chanting for the coda. A smattering of horns enters the fold near the very end to drive home the point.

In keeping with the overall battle theme, if it has not yet been trampled to death by our imaginary troops, “Barrow-downs” serves as a change of pace, and thus scenery, perhaps via a long march or even a retreat. Other than some guttural snarls – which could stand in for a cadence as feet beat – this is an instrumental track. The change of pace is quick, though, as this is by far the shortest track in the offering, but is also steadfast, as this is the point where the focus of the album leaves Tolkien and Middle Earth behind and moves to more general themes of fantasy.

That in mind, “Night Fell Behind” begins this transition with acoustic strings driving the listener into a trance. The janky samples of tambourine set a strange tone as pained vocals stretch out between plucky movements. Stern piano continues this mood, and within “Mirklands” is a mix of droning guitar and shuffling tambourine. The vocals return to the gurgly depths of earlier, and with this change come poignant thoughts of death: “Goodbye, proud world! I’m going home / Thou art not my friend, and I’m not thine!” A sampled harpsichord disrupts the mood only slightly a few times throughout, giving the drums a respite before they continue their march toward certain doom, perhaps at the muse’s own hand.

The closing track, “With Doom I Come,” sees our heroes veer back to the Tolkien themes, and a full cavalcade of sounds comes down – drums, vocals, harp, tambourine, and an assortment of woodwinds. The verses descend deeply into dark and sadness, matched by the lyrics: “Death to light, to law, to love / Cursed be moon and stars and stars above.” The flute and harp serve only to soften the blow as death slowly creeps across what earlier was a thriving imaginary landscape. The vocals grow into a loud throng of voices, letting the listener know one of two things, either this journey will not be one taken alone, or worse, this journey will not be avoided.

Had this effort been recorded in the 1990s it would be almost ahead of its ambient Black Metal brethren. With sampling and production on a much better footing today, With Doom We Come sounds almost archaic, but without the forced “retro” feel of some other artists. In short, these two musicians are trapped in a faded paperback edition of The Lord of the Rings, and have no trouble keeping that vibe fresh and alive. That is why CrypticRock gives With Doom We Come 3.5 out of 5 stars. 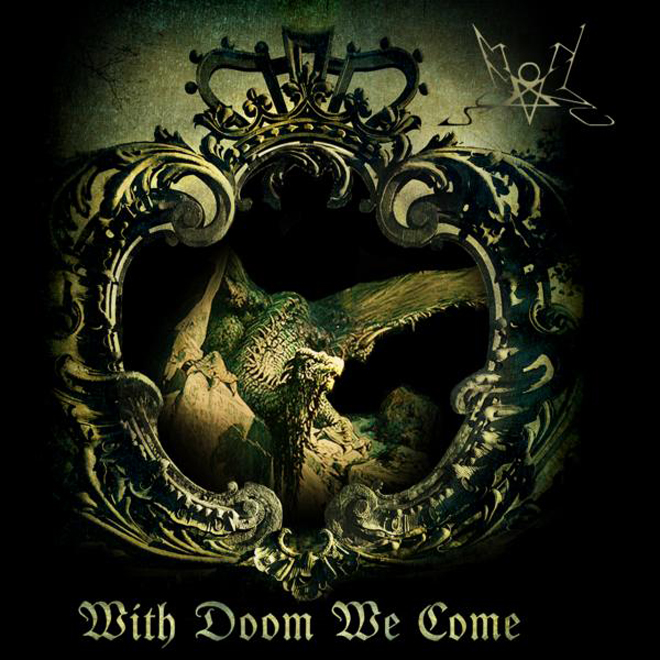 Purchase With Doom We Come: