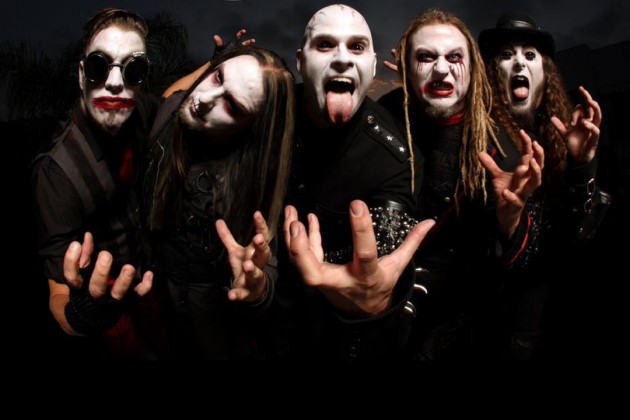 Long Beach, California-based Hard Rock band Sunflower Dead have been kicking the music business’ walls down since 2012. Formed after departing from Metalcore band Droid, Guitarist Jamie Teissere joined up with former Two-Hit Creeper Vocalist and Accordion player Michael Del Pizzo and Guitarist “Jaboo” to jam out and see what they had. Finding they had something special, they quickly honed their sound, as well as their characters, and in the Summer of 2012, dropped their self-titled album, which featured production from Fear Factory’s Christian Olde Wolbers and was distributed via Munky’s (Korn) Emotional Syphon Recordings. The album would be “Album of the Week” by Revolver Magazine during the opening week of its release.

Since then, Sunflower Dead has toured endlessly with the likes of Korn, In This Moment, Hellyeah, All That Remains, Nonpoint, Snot, Powerman 5000, and Soil, to new a few. Joining Teissere, Del Pizzo and Jabbo, Drummer Jimmy Schultz (formerly of In This Moment) as well as Bassist Lats released their highly anticipated sophomore album, It’s Time to Get Weird, on October 30, 2015. A record which they clearly put their heart and soul into, It’s Time to Get Weird was produced by Dave Fortman (Evanescence, Godsmack) and Mikey Doling (Gemini Syndrome), and released via Bloody Bat Records. Now in 2016, four months after the official release, It’s Time to Get Weird is finally picking up the steam it rightfully deserves.

The album itself is thirteen tracks of everything from Hard Rock to Speed Metal starting with “Inhuman Lung.” This introductory track is deceptively gentle with sinister synths soloing a riff, and disappearing.  Next, “Dance with Death” gives new listeners a taste of what Sunflower Dead is about, as they announce, “Are you ready,” in this Hard Rock with an anthemic flavor as they start the weird. This track lends itself to a good mosh pit rumble. Moving on to the album’s title track and lead single, “It’s Time to Get Weird” features Korn’s Jonathan Davis, which might be apropos with his “Freak on a Leash.” This song has shades of Korn peppered throughout the melody with the dark undercurrents as Davis and Sunflower Dead embrace the different.

Sunflower Dead then comes harder with “Just a Little Kiss” with a combo of normal vocals and growls heading grinding guitars as the band sing about that one girl that causes the most chaos in one’s life. A dark voice says, “You’re Dead to Me” as the guitars grind out a riff with the drums double-timing it during the hook while the band sings/growls about completely writing someone out of their lives. “Nothing” slows the album’s pace with a serious Power Ballad led by a piano melody. The band harmonize beautifully as they sing of the emptiness of being without a loved one. About midway, the melody opens up with a plaintive guitar scream.

Picking the pace back up is “My Mother Mortis,” a guitar-grinding, hard-hitting piece that cuts like a knife through butter. In this tune, the band fights with their inner ids as their vocals grow to a crescendo. The bass leads into “I’ll Burn It,” and continues to lead throughout with everybody else wrapping themselves around until Jaboo breaks away for the solo while the band sings about being a slave to said ids mentioned in “My Mother Mortis” that tend to sabotage our lives. “The Rain” begins with hard drums that drive the track. Guitars accompany as despair takes over, “The rain/the rain got the best of me.” The end of the song has a guitar whine that disappears into oblivion. “Interlude” is a guitar grinding/feedback piece that has growls and evil laughter as the band beckons the listener to, “Come here.”

“Through the Blackest Eyes” could be referencing Dr. Sam Loomis’ voice-over referring to the titular Michael Myers from the opening of Halloween H20: 20 Years Later (1998) as a simple, brooding guitar riff brings the song in, then, the melody breaks wide open while the band walks the listener through the psyche of a born killer. “Anthem of the Seeds” begins deceptively with a piano tune as Del Pizzo quietly sings. Of course, the music opens up as the band sings an ode to their fans. Finally, “Outro” brings It’s Time to Get Weird to a close with a dark accordion riff that fades out. There is a bit of an Easter egg as there is dead air after “Outro,” then, the guys voices can be heard, apparently in a hotel room talking about a ghost on one of their beds before the tape ends.

Sunflower Dead has concocted a fun, raucous offering with It’s Time to Get Weird, progressively getting weirder as the album progresses with a sweet detour with “Nothing” before continuing with the Hardcore Metal, and ending with a cliffhanger-like instrumental end. Be on the look out for them as they will most likely be touring throughout 2016. CrypticRock gives It’s Time to Get Weird 5 out of 5 stars. 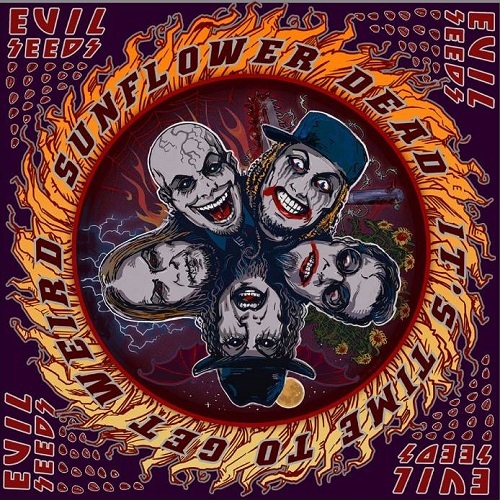