On Wednesday October 9th Taproot, Righteous Vendetta, Blameshift, and SUPER Bob tour stopped at the Drunk Horse Pub in Fayetteville, NC to rock out a pumped up group of fans. Sadly prior to the show Taproot vocalist Stephen Richard suffered a seizure hampering his ability to perform the evening’s set. Despite not being able to perform the band were all in high spirits and were welcoming each fan that approached them. They were also very humble and all smiles in the fact knowing that each fan who came that night to see them perform were eager to send their condolences to the band in hopes that Stephen is OK and hope they will be back to Fayetteville to perform once again. The band even had a toast in his honor for a speedy recovery and asked us at Cryptic Rock to personally take a group photo. Truly one of the most humbling and awe inspiring things for anyone to see. Cryptic Rock salute the hard work and dedication Taproot have maintained to rock n roll all these years. 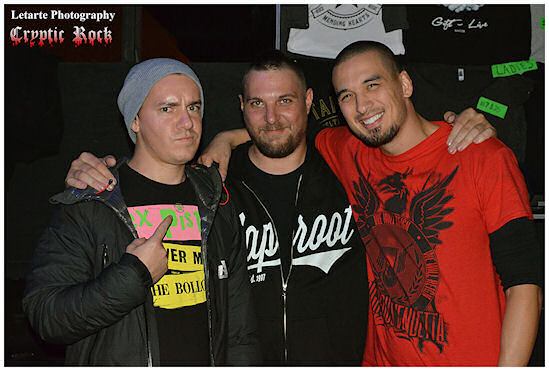 With all other bands ready to carry the torch in absence of headliner Taproot the night of rock went on. Blameshift were the first band to take the stage and put on one heck of a captivating show. The fans were really energetic to hear the band all the way from long island NY, and they were eager to hear some of the new songs off of their new upcoming album Secrets. Jenny Mann in her usual style was all smiles to be back performing in one of her favorite towns and was really taking to the crowd as they were taken with her. The crowd at a few points was cheering the band name and could not stop banging their head up and down at the music. Throughout their half hour plus set not a single person in the crowd were not standing on their feet. Overall Blameshift put on one of heck of a performance which certainly did not disappoint.

Next up were Cody, Wyoming rock band Righteous Vendetta. Fresh off a late summer tour with 10 Years, Righteous Vendetta are a band on the rise. The band has had multiple hit singles including “This Pain”, which spent 15 weeks in the top 20 on Billboard’s Christian Rock chart and “The Fire Inside”, which broke the top 10 at Christian Rock and spent 10 weeks in the top 20. Comprised of Ryan Hayes (vocals), Justin Olmstead (guitar), Isaiah Perez (drums), Zack Goggins (bass), and Carl Heiman (guitar), Righteous Vendetta were quiet possibly one of the most energetic bands that has played The Drunk Horse Pub in sometime. They came out hard and fast which ignited the fans instantly to take to them with crowd mosh’s and chants wanting more and more. Hayes along with the other band members were excited and stoked to be performing for the first time in Fayetteville, NC and it certainly showed in their stage presence and performance. With the release of their newest album Fire Inside just 24 hours prior to this show The Drunk Horse Pub got the height of the celebration. Their sound was off of the charts and fans could not get enough of them. The band set was so impressive there were a few points fans chanting “one more song, one more song”. Righteous Vendetta are an exciting and ecstatic band which are certainly one to look forward to more in the future.

Bumped up to headliner for the evening, Washington DC based band SUPER Bob were the final band to take the stage. The band delivers hard and heavy captivating their audience as they always do in every single one of their performances. Matt Santoro along with his bandmates were really crowd oriented feeding off of the crowd reaction and energy. It’s amazing to see the band keep up and endure the energy levels they do throughout an entire set.  SUPER Bob treated fans to some of their classic tracks such as “Freak”, “Popstar”, and “Superfly” as well as their classic cover song “Sexy and I know it” originally written and performed by LMFAO. The crowd was happy and eager to once again have SUPER Bob come to town with their crowd chants and moshing. The fans love this band and their adrenaline charged stage presence is clearly the reason why.

A Pale Horse Named Death – Infernum In Terra (Album Review)
Like the in-depth, diverse coverage of Cryptic Rock? Help us in support to keep the magazine going strong for years to come with a small donation.
Print page
0 Likes