Suspiria – Forty Years of The Mother of Sighs

In the summer of 1977, a new Horror film hit the USA featuring the tagline, “The only thing more terrifying than the last 12 minutes of this film, are the first 92.” Compelling based on these words alone, that film is Dario Argento’s now legendary Suspiria, starring Jessica Harper (Phantom of the Paradise 1974, The Evictors 1979), Stefania Cassini (Blood for Dracula 1974, Bloodstained Shadow 1978), Alida Valli (Eyes Without a Face 1960, Inferno 1980), Joan Bennett (Father of the Bride 1950, Dark Shadows series ).

Known as one of Horror cinema’s maestros, Italy’s Dario Argento’s work in film began many years earlier, to many, Suspiria was the film that would make the then young filmmaker a force to be reckoned with. Going on to work with George A. Romero on 1978’s Dawn of the Dead, as well as create a list of classics such as 1982’s Tenebre and 1985’s  Phenomena, Suspiria is considered one of the most important Horror films of all-time forty years later.

Co-produced by Claudio and Salvatore Argento, co-writing the film with Daria Nicolodi (Deep Red 1975, Phenomena 1985), the Dario Argento directed Suspiria was released widely to American audiences on Friday, August 12th in 1977. Having a buzz which followed it from overseas, Suspiria follows Suzy Bannion (Harper), an American dance student, that arrives in Germany to attend the Frieberg Academy, a most prestigious dance academy. After students begin dying mysteriously, Suzy begins to realize that there is more going on at the school besides pirouettes and lifts.

The inspiration for Suspiria came from a story that Nicolodi’s grandmother used to tell her about her personal experience as a child in an acting academy where they taught black magic as part of the curriculum. The title and concept for Suspiria came from Thomas De Quincey’s 1845 essay Suspiria de Profundis. In said book, there is a section called “Levana and Our Ladies of Sorrow.” It states that just as there are three Fates, and three Graces, there are also three Sorrows: Mater Lachrymarum, Our Lady of Tears, Mater Suspiriorum, Our Lady of Sighs, and Mater Tenebrarum, Our Lady of Darkness. Though these references are not really made in Suspiria, they are very fleshed out in the sequel, 1980’s Inferno, which is about Mater Tenebrarum.

There is a particular scene just after Suzy arrives where she goes into the locker room to get changed and meets her only friend, Sara (Cassini). After a brief conversation, Olga (Barbara Magnolfi: The Sister of Ursula 1978, Blood on Mèlies Moon 2016) interrupts Suzy and Sara and says “Sssssuzy…Sssssara…I once read that names that begin with the letter S are the names of snakes!” She proceeds to hiss at Sara, who sticks her tongue out at Olga. The scene was nothing short of odd with two grown women acting like children.

The reason for this was Suspiria was originally written to be about girls around the age of twelve. However, when it was felt by the studio and the producer, Salvatore Argento, to be too violent of a film to be about children, Argento was forced to make it about characters in their late teens and early twenties, but he did not rewrite the script, hence the potentially off-putting immaturity and naivete of the characters.

Anything that Suspiria lacks in narrative was surely made up by the overall atmosphere created by the lighting, music, and special FX. Lucio Tovoli was the cinematographer and worked closely with Argento to get the look he was after. Being a big fan of Mario Bava (Black Sunday 1960, Bay of Blood 1971) and Grimm’s Fairy Tales to boot, Dario Argento and Lucio Tavoli watch Disney classic, 1937 animated film, Snow White and the Seven Dwarfs, to get ideas for the vivid color palette. After some initial experiments with the last of the Technicolor cameras, the final result is nothing short of stunning. The over-saturated reds, greens, and blues create a haunting, surrealistic atmosphere that takes on a life all its own.

The score was done by Argento’s musical mainstay, Goblin. After working on 1975’s Deep Red, Goblin and Argento were as thick as thieves. They worked very closely together even before filming began to construct a preliminary score with the goal of creating an infernal atmosphere. When production on Suspiria began, Dario Argento played what he and Goblin had made to give the actors a sense of fear and unease on the set to influence their performances. After production ended, Goblin changed some things in order for the score to blend more with the film.

The soundtrack was very experimental, full of bizarre sound FX and different sounding instruments. For instance, the unsettling voice speaking over the main track is that of Claudio Simonetti. They also experimented with recording things at high and low speeds and with instruments like the bouzouki, a traditional Greek instrument similar to a guitar. This was one of Dario Argento’s ideas, as he had traveled to Greece before shooting began and was very inspired by street musicians playing the bouzouki, which produced very unique sounds apart from that of a guitar. They also used African percussion, the sound of crushing plastic cups, and hitting jugs filled with various levels of water with a hammer. Dario Argento was after the most unique sounds he could find, and the final result is one of the most polarizing Horror soundtracks in modern cinema.

The third piece to the technical puzzle is the brutal Special FX by Germano Natali (FX: Deep Red 1975, The Beyond 1981) and Fabio Traversari (The Barbarians 1987, Just Married 2003). The first death in the film, Pat, is probably the most merciless, as it was not just a quick stab and she was dead. No, her face is smashed against a window until it shatters, then is repeatedly stabbed until there is a gaping hole in her chest so the viewer can see her beating heart, which is stabbed. Then she is tied up and thrown through a large window where the rope ends up moving from her waste to her neck as a noose in a seamlessly well-edited shot. This in turn also kills her friend with falling glass. There is also a scene with Stefania Casini where she is running from a killer through the school and ends up in a barbed wire trap that would be much at home in the Saw films.

Critically, Suspiria was mostly well received. In fact, The Village Voice ranked Suspiria #100 on their list of the 100 greatest films made in the 20th century. Critics aside, where Suspiria really earns its legacy are the fans. Mostly adored by educated Horror film fans, it is one of those films that even casual viewers have at least heard of. For its artistic approach both in use of color, cinematography, and soundscape, it is more than a Horror movie, it is a beautiful cinematic gem. It is such an influential film, bands have named themselves in honor of its title, and multiple directors have clearly been inspired by it. For example, 2016’s film The Neon Demon by Nicolas Winding Refn is clearly a homage to Suspiria in many ways.

Released several times for home video consumption, currently, Synapse Films is wrapping up production on a Fortieth Anniversary Blu-Ray with a brand new 4K transfer of Suspiria with the remastering being supervised by Lucio Tovoli himself for accuracy. No release date has yet been announced for the Blu-ray, but it is sure to be a hot seller.

There is also a remake of Suspiria in the works starring Dakota Johnson (Fifty Shades of Grey 2015, Black Mass 2015), Chloe Grace Moretz (Kick-Ass 2010, Let Me In 2010), and Tilda Swinton (The Beach 2000, Only Lovers Left Alive 2013). According the IMDB, the modern rendition is “Susie Bannion, a young American woman who travels to the prestigious Markos Tanz Company in Berlin in 1977, arriving just as one of its members, Patricia, has disappeared under mysterious circumstances. As Susie makes extraordinary progress under the guidance of Madame Blanc, the Company’s revolutionary artistic director, she befriends another dancer, Sara, who shares her suspicions that the Matrons, and the Company itself, may be harboring a dark and menacing secret.” Whether the remake is accepted by dedicated fans of the original remains to be seen, but it will be interesting to see what direction the new film goes.

There is so much which can be said, but even after forty years, Suspiria is still being discovered, discussed, and studied in all film circles and will always be widely regarded as a modern Horror masterpiece. 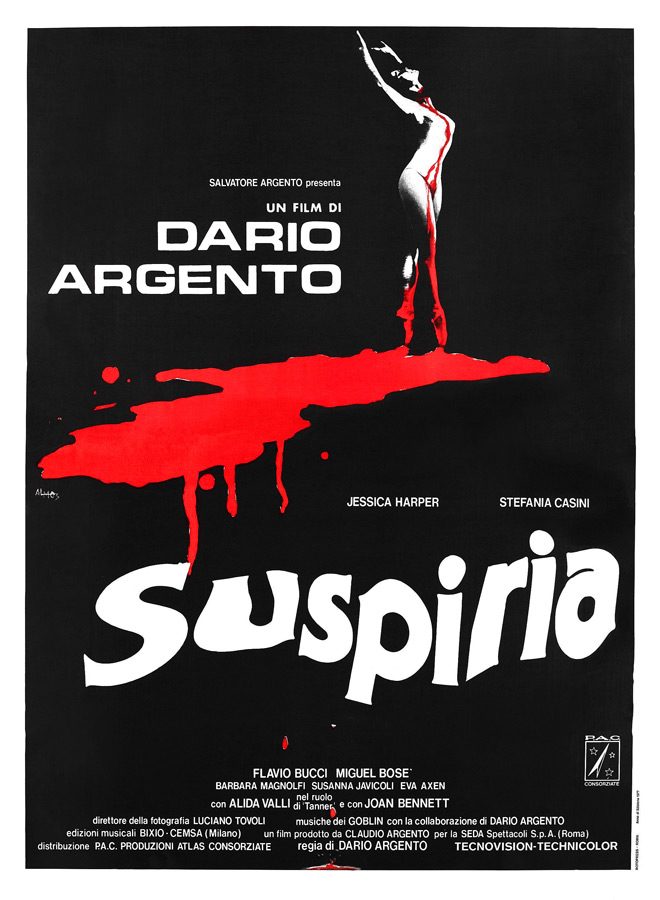