On Friday, December 21, 2007, beloved and already legendary Director Tim Burton (Beetlejuice 1988, Corpse Bride 2005) delivered his whimsical, musical, magical spin on a classic of the modern stage, Sweeney Todd: The Demon Barber of Fleet Street, to U.S. theatre audiences. With an all-star cast touting the likes of Johnny Depp, Helena Bonham Carter, Alan Rickman, and Sacha Baron Cohen, this was one exciting exsanguination-fest that was guaranteed to be a bloody good time. 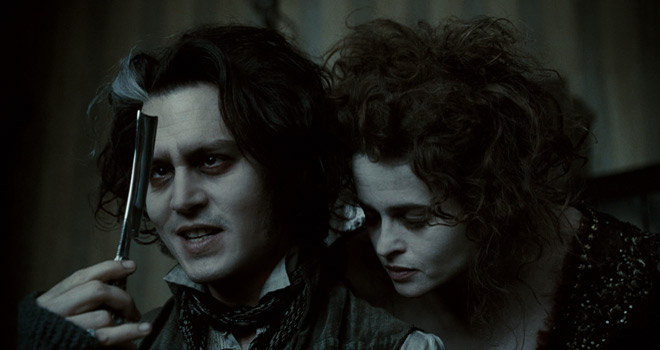 High school drama students everywhere know the Victorian-aged melodramatic Horror of Benjamin Barker – operating under the guise of Sweeney Todd (Depp: What’s Eating Gilbert Grape 1993, Pirates of the Caribbean: The Curse of the Black Pearl 2003) – an 1800s London barber-cum-serial-killer who shaves the life from his customers with the help of his trusty straight razor. Of course, every dastardly killer needs a lovely accomplice, and Barker/Todd has Mrs. Lovett (Bonham Carter: Fight Club 1999, Harry Potter and the Order of the Phoenix 2007), she being the kindly downstairs neighbor who tenderly bakes Todd’s victims into her infamously wretched meat pies.

An adaptation of Stephen Sondheim and Hugh Wheeler’s Tony Award-winning 1979 musical of the same name, Sweeney Todd had been a dream production for Burton since the early 1980s when he originally saw the musical – three nights in a row, in fact – as an arts student. However, it was not until 2006 that he had the opportunity to realize his daydream, when DreamWorks (no pun intended, ahem) announced his appointment as replacement for Director Sam Mendes, who had been working on the adaptation but left the project to spearhead the 2005 film Jarhead. Though Sondheim was not directly involved with the project, he was consulted extensively throughout production. It is said that he was, in fact, cautious of a cinematic adaptation of his bizarrely beloved, award-winning musical, though he was largely impressed with the end result. 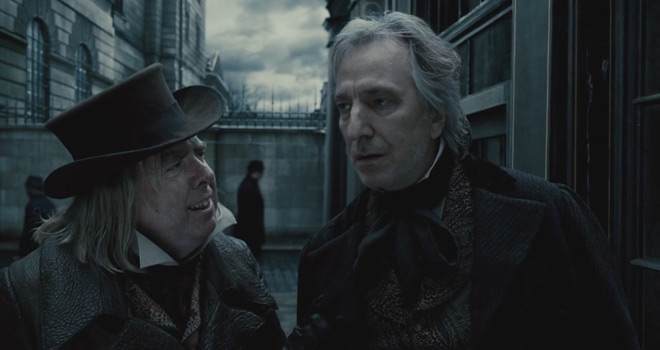 There were, of course, inherent risks in casting the hugely popular, superbly talented Depp in a singing role, when he is not technically a vocalist (but an accomplished guitarist, nonetheless). In preparation for the role, Depp did, in fact, enlist in singing lessons, though it is stated that Producer Richard D. Zanuck still acknowledged the entire thing was something of a gamble. Despite some criticism from the media, reviews of Depp’s performance were largely favorable with most fans willing to overlook any shortcomings in pitch in favor of the actor’s astounding on-screen talents. In fact, reviews of the entire cast were mostly favorable, with fans embracing the quirkiness of the production rather than nit-picking vocal prowess.

Despite the hurdles that Sweeney would have to overcome, filming began in London on February 5, 2007, and was completed by May 11th. Production Designer Dante Ferretti created a darker, more sinister Victorian London, though it is Depp himself who is credited with creating the image of his character, particularly that schnazzy white patch of hair. Of his brutal character, Punk Rocker Depp would quip: “He makes Sid Vicious look like the innocent paper boy.”

It was Director Burton, however, who made the call on all that deliciously vile, red plasma. As previous stage incarnations had been largely robbed of bloodshed, Burton wanted to go the opposite route, depicting in gory technicolor the shocking and macabre realities of Fleet Street. Producer Zanuck quipped: “I remember saying to Tim, ‘My God, do we dare do this?’” It’s interesting to note that, on set, the copious amounts of fake blood were actually colored orange to render correctly to the desaturated color film that was used in shooting the movie. 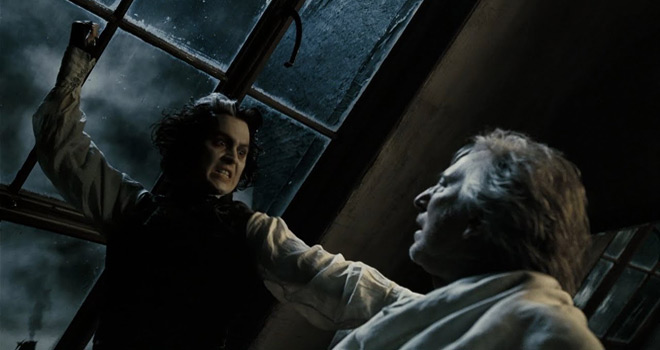 Released to theaters across the US on Friday, December 21, 2007 – with the UK having to wait until Friday, January 25, 2008 – Sweeney Todd: The Demon Barber of Fleet Street met with largely enthusiastic critical reviews and massive fan-fare from audiences. In fact, though the film was not considered an outstanding financial success – despite raking in over $9-million in its opening weekend alone – it would go on to be nominated for a slew of accolades while winning a number of prestigious awards including the Golden Globe Award for Best Motion Picture – Musical or Comedy, the Golden Globe Award for Best Actor – Motion Picture Musical or Comedy, and the Academy Award for Best Art Direction.

There is little wonder why, at ten years in age, Sweeney Todd holds up as one of the best Horror Musicals of our modern age. Director Burton is a phenomenal talent in his own right, though his cast is a force with which few could ever hope to compete. Their lovingly quirky, avant-garde take on a Musical that was already much beloved and entirely unique in its own right, stands up as one of the best films in the past decade and far beyond. From murderous mayhem to musical magic, Sweeney Todd has it all and them some. After all, who doesn’t love a little exsanguination with their shave? 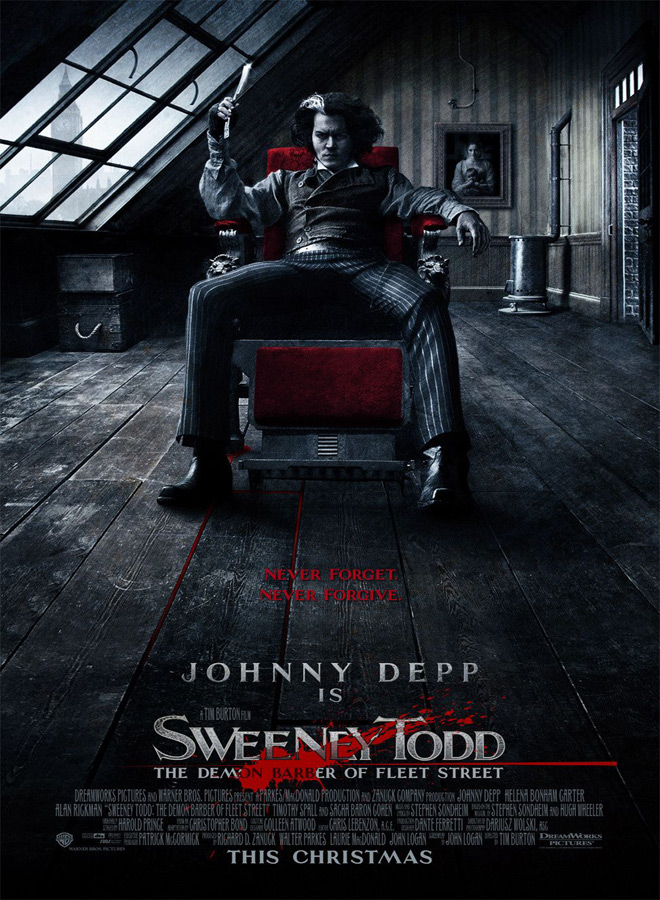