In the 1960s and 1970s, England’s answer to the monsters of Universal Studios was Hammer Films and Amicus Productions. The latter – a now defunct British film production company, based at Shepperton Studios – was responsible for perhaps one of the best Horror anthologies ever put to film, Tales From the Crypt. 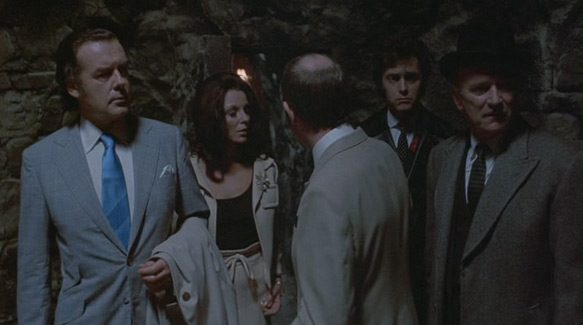 Opening with a spooky pipe-organ rendition of Fugue in D-Minor and a tour of a cemetery, five characters are touring the catacombs when they become lost. Seemingly at a dead end, a door opens into an empty room. When they try to leave, the door shuts and the mysterious Crypt Keeper (Richardson) appears and begins probing them with questions. Each person has done horrid things that they think no one knows about, but, of course, the Crypt Keeper knows.

The first segment, …And All through the House, follows Joanne Clayton (Collins) who murders her husband for his insurance money on Christmas Eve. As Joanne tries to make the murder look like an accident, her daughter Carol is upstairs asking when Santa Claus is coming. All the while, unbeknownst to Joanne and Carol, a homicidal maniac dressed as Santa Clause is prowling around the house trying to get in.

This story would eventually be remade for the Tales From the Crypt HBO series in 1989 by director Robert Zemeckis (Director: Back to the Future I-III 1985-1990), starring Mary Ellen Trainor (The Goonies 1985, The Monster Squad 1987) and Larry Drake (Dark Night of the Scarecrow TV Movie 1981, Dr. Giggles 1992), and is a much scarier and better told version. 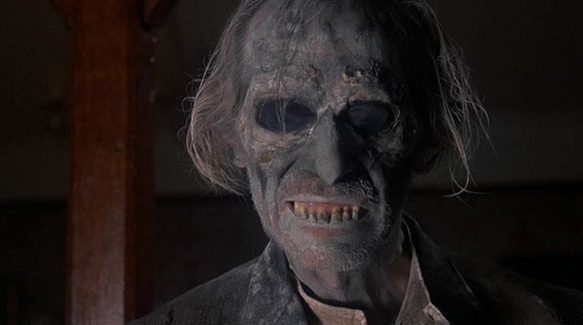 Segment Two is called Reflection of Death, in which Carl Maitland (Hendry) abandons his wife and children to run away with his younger lover, Susan (Angela Grant: What’s Up Superdoc! 1978, What’s Up Nurse! 1978). While they are driving, Carl awakens from a bad dream only to find that some dreams are really premonitions. It’s a morality tale of sorts about leaving your family.

Meanwhile, his neighbor across the street, James Elliot (Phillips), is obsessed with Grimsdyke and his shabby house that seemingly do not fit within the neighborhood of larger, nicer homes. James and his Father have tried to get Grimsdyke to sell but to no avail. James perceives himself to be much better than Grimsdyke, and starts a campaign to destroy poor Mr. Grimsdyke’s life piece by piece until he will sell his property. 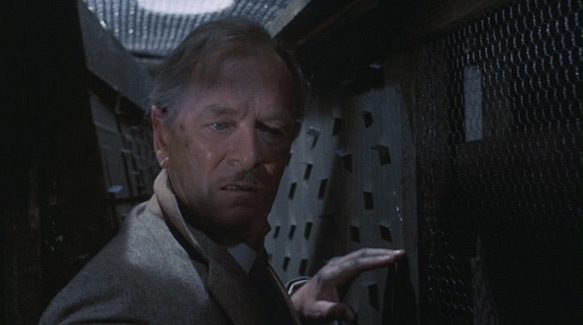 Then comes Wish You Were Here, the fourth segment  in which Ralph Jason (Greene) has gambled money from his own company on some bad investments and lost; and his lawyer has informed him that he has to sell everything in order to pay his debts. When Ralph breaks the news to his wife Enid, they start reminiscing about things they have purchased and their focus turns toward on a jade statue that will supposedly grant wishes – but in the most terrible way imaginable. When Enid wishes for lots and lots of money, Ralph reminds her of the tale of “The Monkey’s Paw,” in which the wisher gets everything they want but at a horrible, ironic cost.

The final segment, Blind Alleys, features Major William Rogers (Patrick) and his dog, Shane, who have just been put in charge of the Elmridge Home for the Blind, a home for middle-aged to elderly blind men. Major Rogers is under the impression that his strict military background qualifies him to care for blind men, though he is woefully unprepared.  Soon after he takes control, he starts skimming from the budget to buy paintings, wine, and steaks all while taking heat, blankets, and food from the poor, blind men. Carter (Magee) makes it a point to be the spokesperson for the men but when he gets too vocal, Rogers scares him and the others off with a barking Shane. On a cold winter’s night, one of the men dies from sickness due to the lack of heat and blankets. When Rogers shows a deciced lack of concern about the situation, the men rise up and take matters into their own hands.

While the acting is commendable all around in Tales From the Crypt, there was one stand-out that merits special attention and that is Peter Cushing. Viewers get to see a different side of Cushing – who was clearly not above playing a good man – but never such a character as the sweet, innocent, caring, and unassuming Mr. Grimsdyke; he was someone you would want for a grandfather.

Interestingly, Cushing was originally tapped to play Ralph Jason in the Wish You Were Here segment but once he read the part of Grimsdyke, he insisted that he play that part – which was expanded once Cushing showed interest. However, for every gentle character, there must be someone cruel and Robin Phillips had cruelty down to a science as James, the pompous, arrogant, egotist; he had a knack for making the viewer hate him with every fiber of their being. When Grimsdyke finally gets his ghastly revenge, one cannot help but feel that James’ end was not violent enough.

Made on estimated budget of £170,000 (British pounds sterling) and shot between September and October of 1971 around England, once Tales From the Crypt was released it did exceptionally well. Furthermore, once the film was released in the USA, it grossed an additional $3,000,000.  Not bad at all for a Horror flick at the time. 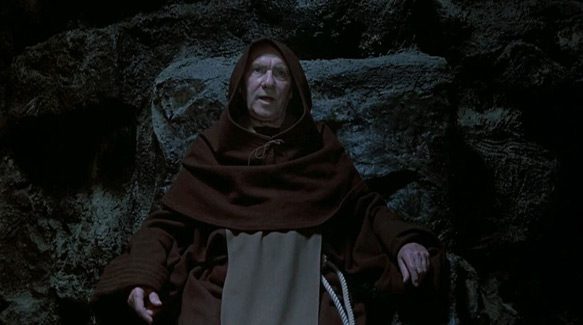 While the film stands alone as a Horror classic, one cannot overlook its impact over the years.  When HBO picked up the Tales From the Crypt name for what would be their new TV series – first airing in 1989 – the show would become a household name in the U.S.  It quickly became a series many knew and loved, though it featured a different version of the Crypt Keeper: a rotting corpse with a morbid sense of humor, voiced by comic actor John Kassir.  This was in opposition to the dark-hooded, more human figure portrayed by Ralph Richardson in the film. It could be argued that, had it not been for 1972’s Tales From the Crypt film, the television series may have never come to be.

The future of the Tales From the Crypt name lives on triumphantly with the recent announcement of M. Night Shyamalan’s 10-episode anthology series under the infamous name. The jury is still out on what style it will take – that of the English classic being discussed or the more campy ’80s series. And while 1972’s Tales From The Crypt is dated by today’s standards its strength is in the characters and their acting abilities, as well as the writing and directing, have helped this classic Horror anthology film to stand the test of time. All this in mind, Tales From The Crypt  is a film that is as enjoyable today as when it was 45 years ago! 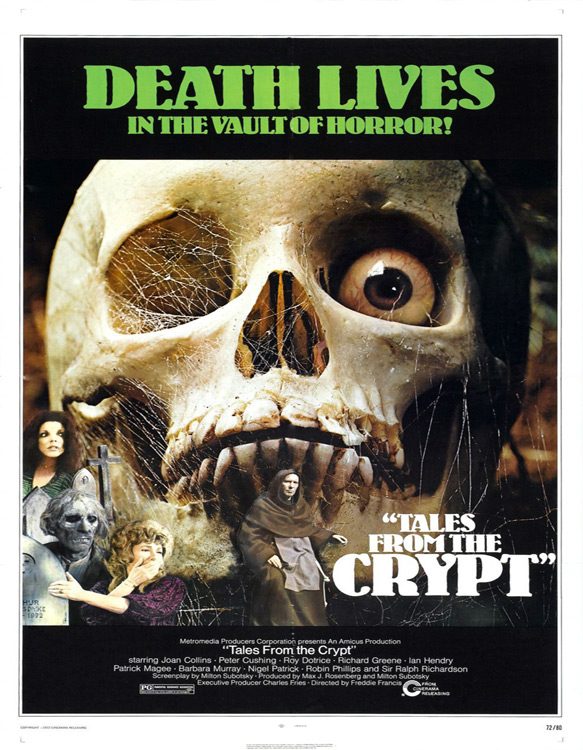 Purchase Tales from the Crypt: Amazon