Writer/Directors Bart Mastronardi (Vindication 2006) and Alan Rowe Kelly (I’ll Bury You Tomorrow 2002, The Blood Shed 2007) present an intriguing anthology film entitled Tales of Poe. Based on three ground-breaking works by the master of the macabre, Edgar Allan Poe, Tales of Poe initially saw release in August of 2014, but as of October 11, 2016 sees a DVD and Digital release via Wild Eye Releasing. Lasting about two hours, the film is separated into three distinct chapters of Horror and is sure to keep viewers intrigued for its duration. 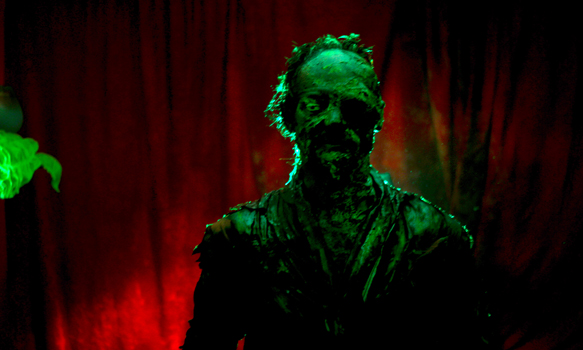 Chapter One, The Tell Tale Heart, changes gender roles for the narrator and victim, gives a motivation for the crime, and presents a clever twist at the conclusion. Debbie Rochon (Santa Claws 1996, Bleed 2003) presents a cool and sexy narrator who calmly explains her heightened senses did not mean she was mad. On the contrary, “Mad people know nothing,” she explained, and invited us to listen as she calmly explained the whole story. A nurse (Desiree Gould: Sleepaway Camp 1983, Under Surveillance 2006) at the Bernice Estates introduced the narrator to fellow “club members” at the asylum including Fritz (David Marancik: Razor Days 2012, Ghosts 2012) and Evaline “Evil Lynn” (Lesleh Donaldson: Funeral Home 1980, Happy Birthday To Me 1981) and her stuffed bunny doll, Annabelle Lee.

Unsteady camera work, tinny music box accompaniment, heartbeats, and laughter reflected the fallibility of the speaker as she related the events following her employment as a personal care assistant to retired Silent film star Peggy LeMar (Alan Rowe Kelly). The bedridden Ms. LeMar’s blind eye drove the narrator to perpetrate the crime and hide the evidence, the narrator dismembered and hid the body beneath the floorboards of the LeMar Mansion. When the police investigate a shriek reported by the neighbors, the narrator, dressed in Ms. LeMar’s expensive clothing and jewelry, seduced the young police officer (Joe Quick: Horrorween 2012, B.R.O.O.D. 2012) until her guilt gave her away. Fans of Poe’s written work will enjoy this gender-flipping excursion into the mind of a killer, and fans of Horror will love the gory surprises. 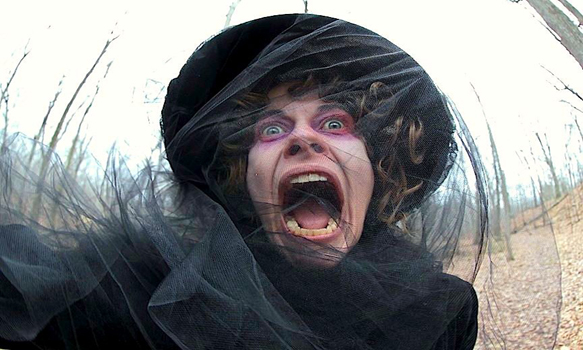 Next, Chapter Two, The Cask, brings viewers on a campy Tales from the Crypt-esque exploration of the wedding of the wealthy Fortunato Montresor (Randy Jones: Can’t Stop the Music 1980, Village People member) and Gogo (Alan Rowe Kelly). Guests gossiped while the obviously unwell groom showed off his wine cellars and bestowed gifts on his new bride.

A mysterious masked man plagued Gogo, but he revealed himself as Marco LaCassi (Brewster McCall), wine connoisseur and friend of Fortunato. A pretty blonde guest, Sara (Zoe Daelman Chlanda: I’ll Bury You Tomorrow, Vindication), fell into a psychic vision of sorts, and Fortunato collapsed. He awoke to Gogo’s care to find all but Marco left the wedding reception. The suspicious maid, Morella (Susan Adriensen: Sculpture 2009, Lewis 2011) tried to give Fortunato medicine, but Gogo sent her away. Motivated by money and inspired by Sara’s vision, Gogo enacted an ingenious plan to do away with her husband. She and her lover, Marco, wall up the drugged groom in the wine cellar after setting him on fire. When Marco made a play for Gogo, she poisoned him, unwilling to share her new-found wealth. Echoing whistles of Fortunato’s favorite earworm,  “Alive, Alive-o,” worried the murderer until she faced her corporal fear.

Lastly, Chapter Three, Dreams, is an esoteric take on Poe’s “Dream Within a Dream” poem. Surreal as a drug trip, the viewer experiences perhaps the dying of a young woman (Bette Cassatt: V/H/S/2  2013, The Lake 2013) haunted by demons and visions which are at turns beautiful and others terrifying. Vivid imagery, gorgeous costuming, and fabulous makeup were punctuated by deep red roses, magical harpsichord music, and only a sprinkling of poetic recitation leave a decided feeling of floating detachment. Amy Steel (Friday the 13th Part 2 1982, April Fool’s Day 1986), Adrienne King (Friday the 13th 1980, Friday the 13th Part 2 1981), and Carolyn Williams (The Texas Chainsaw Massacre 2 1986, Halloween 2 2009) lend their refined beauty and acting chops, and Cartier Williams jumped out as a tap dancing dreadlock demon. 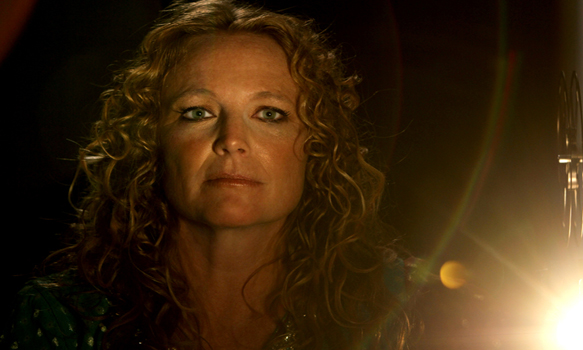 This longest chapter of the movie differed from the other chapters, but so did the original works. Dreams interpreted a poem, while the other chapters incorporated plot and at times language solidly set out. In the poem, the reader confronts a battle between hope and misery. The Chapter Dreams presented a stylized foray into the theme, and the end result left viewers with much to contemplate.

Overall, Tales of Poe featured atmospheric music by Tom Burns, intriguing set design by Alan Rowe Kelly and Marc Masters, and stunning makeup by Lee Simms, Sacred Schneidmiller, and Alan Rowe Kelly. Despite many bloody scenes, in the credits, the filmmakers assured viewers “no stuffed bunnies were harmed in the making of this film.” That said, Tales of Poe is an enthusiastic interpretation of three very different chapters in Poe’s writing career. CrypticRock gives this movie 4 out of 5 stars. 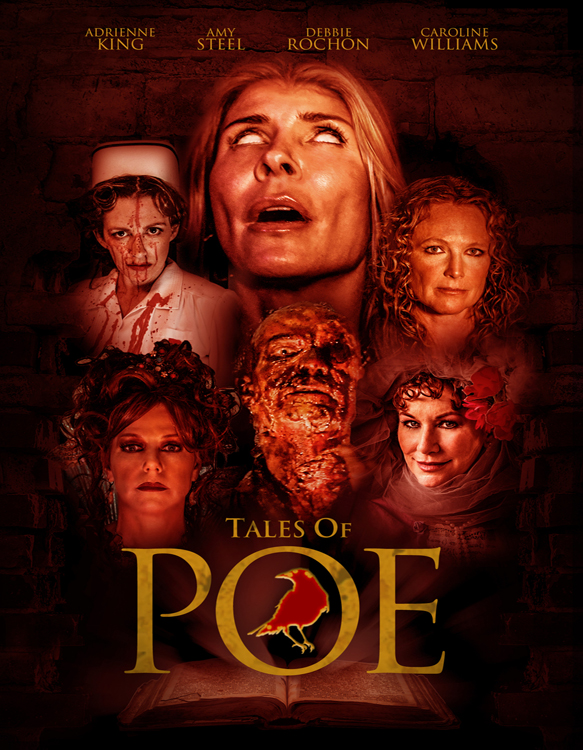 Purchase Tales of Poe on Amazon