Forty years ago, on February 8, 1976, Martin Scorsese’s legacy was born with Taxi Driver. Directed by the magnificent Scorsese and written by Paul Schrader, the dynamic cast consisted of Robert De Niro (The Godfather: Part II 1974, Meet The Parents 2000), Jodie Foster (The Silence Of The Lambs 1991, Panic Room 2002), Cybill Shepherd (Moonlighting TV series, The Client List TV series), and Harvey Keitel (From Dusk Till Dawn 1996, The Grand Budapest Hotel 2014). Not only did it jump-start Foster’s career, made De Niro a renowned actor, and marked Scorsese as one of the top-rated filmmakers around, it also became one of the most influential pieces in American cinema. 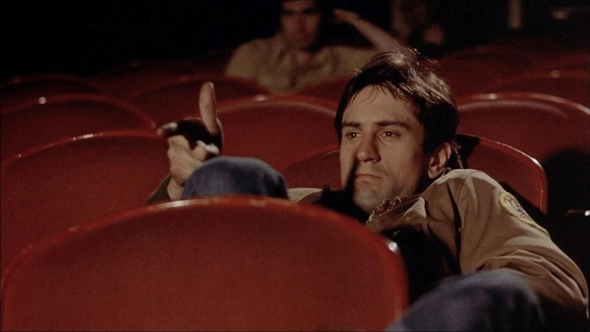 Forty years after its initial release, it still stands out as one of the top-rated films that continues to shock audiences across the globe. Winning the Palme d’Or at the Cannes Film Festival kicked off the film’s international success. Taxi Driver landed four Academy Award nominations, including Best Picture, but did not win. It was not until 2007 Scorsese took home the Best Director Oscar for the film The Departed. The estimated budget for Taxi Driver was $1,300,000, and the gross reached $21,100,00 by the end of 1976 in the United States.

It took Shrader less than a month to complete the script as he was facing several personal challenges at the time that helped him find inspiration for writing, which included his own heartbreak, loneliness, and alienation, and at one point he lived in his own car. Inspiration also came from excerpts of Arthur Bremer’s diaries, the man who shot the presidential candidate George Wallace in 1972, and pieces from Fyodor Dostoyevsky’s Notes From Underground. Scorsese’s direction brilliantly combined different cinematic elements including Film Noir, Art House, and Traditional filmmaking that has inspired modern day directors such as Christopher Nolan. Despite forty years passing by, Taxi Driver remains entertainingly disturbing. Each shot, lighting, and placement was carefully thought out by Scorsese.

The musical score came from the acclaimed Bernard Hermann who has composed Psychological classics including Citizen Kane (1941) and Psycho (1960). Hermann was a real genius where the music followed the somber mood of De Niro’s character, along with the particular saxophone use to add to the scum of the streets that were encountered in Times Square. These subtleties did not make it overly dramatic, nor bland; there was a remarkably composed balance between the two. Sadly, Herrmann passed away in 1975 due to a heart attack,  This was his last musical score, and unfortunately, he never saw his beautiful creation in front of the big screen. Between the movement of Hermann’s composition and Scorsese’s selected camera movements, dollies, slow pans, and mind-numbing close-ups added enhancements to captivate the mental instability from the central character of Travis Bickle (De Niro).

A film where there is more that meets the eye, it follows Bickle driving around the dirty streets of Manhattan in a Taxi cab. The method actor De Niro morphed directly into this role that included him working as a New York City cab driver for an entire month. The opening kicks off with the emotion of loneliness as wind blows dust in front of the screen as a cab slowly passes by until the opening title Taxi Driver rolls in. De Niro’s character ignores his past by taking any job that requires him to have little to no free time to self-reflect. As his mysterious tainted soul appears to haunt him, he moves to New York City and surrounds himself by the trash it holds, especially in the Times Square area filled with Hookers, Drug Dealers, and all around garbage. 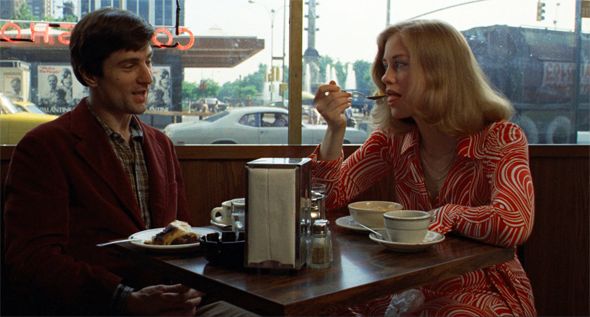 Bickle, an ex-Marine, remains alone, where the only person he talks to is through letters and notes to his parents. The history behind Bickle was never clearly revealed to the audience, aside from knowing that he was discharged from the Marines, making the viewers assume his leave was recent, and he was possibly running away from something or even from himself. His instability continued to grow, along with the extra dollars in his pocket from working all of the time, where Bickle became restless.

As the audience continues to follow Bickle, seeing his disgust with the ongoing grime that lies in Times Square with its prostitution corruption and overflowing waste, Bickle stated, “All the animals come out at night.” Bickle is unable to escape it as he drove himself to the grimy pornographic movie theater to help with his insomnia. The audience is reminded by his disgust, as a slight foreshadowing happens when Bickle wishes someone would wipe the sewage away. He is yet, somehow, always drawn to the streets of Times Square and spends his isolation in the regimented routine of sitting in a yellow cab all day driving around. It is revealed that he is a loner as he barely speaks to people, nor does he try to make any new friends, aside from reaching out for the unattainable.

Adding to his madness, he aims high and shoots for a beautifully bold and blonde woman, Betsy (Shepherd), who works in support of a Presidential candidate. It becomes apparent to the audience that she is out of his league, yet he continues to chase her. Bickle attempts to charm Betsy by taking her out to lunch. This lunch scene is a pivotal part as it loosely returns later on in the film. During this awkward lunch, Betsy explains to Bickle that he reminds her of a Kris Kristofferson song as she recites the lyrics from, “The Pilgrim, Chapter 33” with, “He’s a prophet, he’s a pusher, partly truth and partly fiction, a walking contradiction.” Bickle reacts to this by asking, “you saying that to me?” Betsy replied with, “Who else would I be talking about?” The romance between the two fades shortly after as she sees he is mentally disturbed. Bickle strangely shows to Betsy how he has no interest in Pop Culture, Politics, or much of anything. He could not escape his obsession with the city’s muck as he blindly takes Betsy to a pornographic movie theater. Betsy realized how flawed and disturbed Bickle is as she runs away, leaving him alone, frustrated, and confused.

Bickle is a character that, despite his troubled mindset, does not understand why he cannot have the same thing as everyone else on the streets seem to have, togetherness and happiness. Men appear to attain these attractive women and cling to their arm. Meanwhile, Bickle surrounds himself to the dirt on the streets where the Pimps and Hookers live, possibly reminding him of the filth he has felt about himself. Shortly after Betsy’s rejection, the story darkens as Bickle’s anger towards society, life, and his frustrations grow. His loneliness takes over him as he observes the scum managing to find said romance, where Bickle has none as he could not even woo his infatuation with Betsy. His temper rises while dollar bills grow out of his pockets, that slowly builds to his bold execution. 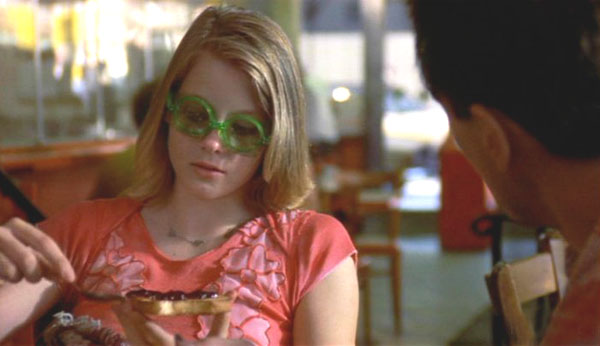 The biggest turning point is when Bickle bumps into Foster’s character, Iris, the 12-year-old Prostitute. He listens to her lost and secluded story and observes this child working on the streets that he has loathed since he stepped foot into the city. Bickle’s rage grows as he feels the need to save the young Iris. He buys a handful of guns, and his focus turns to get back into shape and to become a hero of some sort by removing the crud himself. The most famous scene in the film appears where De Niro looks at himself in the mirror stating, “You talking to me?” This moment is one of the most memorable scenes in the history of cinema, which turned out to be an improvisation by De Niro. It was loosely written in the script as “Travis speaks to himself in the mirror.” There has been an ongoing theory lasting forty years about the meaning and motivation of this particular scene. One theory is a follow up from the scene with Betsy at lunch where Bickle fights back in response to her to showcase his new and improved inner strength. Regardless of the meaning, Bickle appears focused and prepared to save Iris from the said slimebags.

The suspense is still relevant and incredible today as it was forty years ago. Scorsese had to desaturate the blood and violence in this scene because, at that time, it was considered too violent. However, it continued to distil fear in any viewer, perhaps more than most modern films that are used today with excessive visual effects and green screen enhancements. It was the simple movements and suspense that went into the editing that has made this scene powerful. After De Niro’s character kills the Pimps while being shot at, the audience is led to believe that he would die. He, exhaustingly, sets himself on the couch near the confused and scared Iris as a group of cops walks into the room. The camera was raised at a high angle that revealed confusion in the cops eyes, where one would not know if they wanted to shoot, arrest, or praise Bickle for removing the scum. 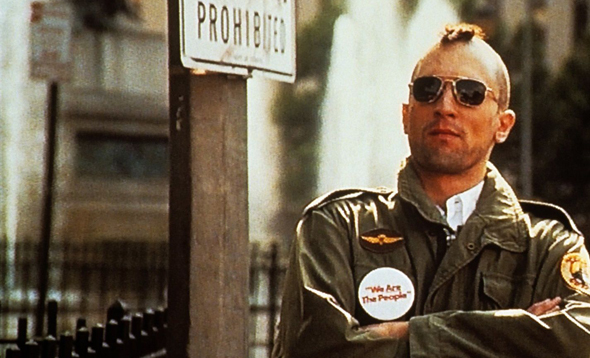 The next scene showcases time passed by where Bickle survived and had become known as a hero where he did save Iris. Despite Bickle transforming to a praised gentleman, an interesting trait is that he was more concerned about his rejection from Betsy than the horrific near-death experience he recently went through. The film ends where Bickle bumps into Betsy again while driving in his Taxi cab. This time around, she was happy to see him as his face continued to glow from being near her once again. His relentless infatuation with this woman appeared unstoppable as he gave her a free fare. It was a bittersweet ending to settle the nerves in the audience after the murderous rampage, and it worked well.

Taxi Driver, forty years later its initial shock-factor, continues to sting the audience. Meticulously created by the great Scorsese, every time you watch it, a new discovery unfolds. The film moves deeper than showcasing Bickle’s flawed and mentally disturbed attributes as it reminds the audience that we are all human. It depicts on human suffering, alienation, and madness in a way that many can relate with. It explores a level of bravery between taking a super-hero action to save a young woman and to go for the extreme by chasing after the apparent unattainable. It is a notable film that will remain a timeless cinema classic. 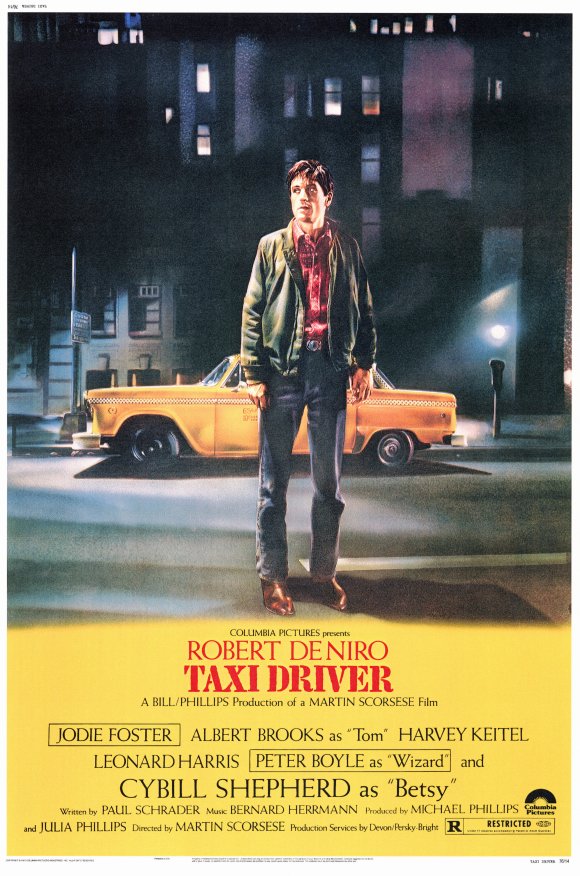