Coming together in New York City in 1973, the Rock band known as Television, four years later, would go on to release their debut LP, Marquee Moon. Forming at a time when acts such as Black Sabbath and Led Zeppelin dominated the airwaves, Television took their cue from ’60s Garage Rock and the burgeoning Punk scene which included The Stooges and the MC5. Screaming guitars and aggression were at the heart of the band’s sound, but they also had incredible technical proficiency.

Featuring Tom Verlaine (vocals, guitar, keys), Billy Ficca (drums), Fred Smith (bass, vocals), and Richard Lloyd (guitar), Television cut their teeth in the explosive music scene on Manhattan’s lower east side. Gigging regularly at the famous CBGB’s before it became a landmark, between 1973 and 1974, Television played while members of The Ramones, Blondie, Talking Heads, and Patti Smith were in the audience. Then, on on February 8th of 1977, when the aforementioned acts were a huge part of the Punk /New Age scene, Television would make their mark with Marquee Moon.

Produced by famous British Sound Engineer Andy Johns, along with Verlaine, Marquee Moon was recorded at A & R Recording in New York City in the fall of 1976. Released less than a year later via Elektra Records to glowing critical reviews, Marquee Moon failed to chart well in the United States. Not overlooked abroad, the album cracked the top 30 in Europe while Television’s musicianship in an era of British Rock and Punk Rock drew five star and A+ scores in all of the major music publications, thus making it a compelling piece of music forty years later.

Fast-paced opener “See No Evil” sets the tone for the record with guitar playing that is both frenetic and aggressive with Punk attitude and high-level musicianship. A chorus with a classic girl-group drumbeat (kick, kick, kick, snare) reminiscent of the Ronettes and other stars of that era cuts into the wailing guitars, providing a welcome respite from the anarchy. Clocking in at just under four minutes, it is one of the shorter tracks on the album, “Venus” being the other.

“Venus” is where Television takes a turn toward a straightforward, melodic Rock song. A song that comes off as almost gentle, in a time when angst and rancor were all the rage with bands like The Ramones and The Sex Pistols capitalizing on the disaffected youth of America and the U.K. On this Pop flavored number, Verlaine waxes poetic about the brutality and beauty of New York City as he sings about Broadway, bright lights, and cops. There is no shortage of wit as Verlaine sings about how he fell right into the arms of Venus de Milo.

The Country-tinged, psychedelic freak-out laced “Friction”comes next with a pulsating rhythm, endless eerie effects, and punctuated power chords. Hurrying along at a heated rate, this song encapsulates the band’s versatility like no other on the record. Here the listener realizes these four men have been influenced by Proto-Punk, outlaw Country, and heavy Psych-Rock. Halfway through, a harried guitar solo takes the song right off the cliff into a frenzy of noise. Verlaine delivers the lyrics with an overwhelming sense of dread, making the song all the more disturbing. The ability to combine dread and melodic freak-outs that teeter between apocalyptic nightmares and nursery rhymes are what made Television stand out from their contemporaries who were grinding out three chord Rock with lyrics lamenting not having a cigarette or a girl to kiss.

Side one closes out with the epic title-track, “Marquee Moon.” Released as a single on April 1st of 1977, at just under ten minutes, the song is a dizzying array of symphonic guitar arrangements and numerous brash solos, the song melds poetic lyrics with top flight musicianship. Each passing minute builds on the previous, and despite being lengthy, Television is economic in their playing. There are no wasted notes, no over the top guitar wizardry, just crisp, angular guitar playing all held down with a perfectly timed rhythm section that allows for a sonic soundscape that was unheard of at that time. Here, a group of scraggly New York guttersnipes laid down a track as intricate as anything previously put forth by the likes of Yes, Genesis, Gentle Giant, and any other ’70s Prog-Rock stalwart. That said, the title-track is clearly the crowning achievement on an album that is rock solid from start to finish.

Side two open with “Elevation” and, here, Television continues with mind-bending intricacy. Verlaine and Lloyd manage to engage in a perfect marriage of playing in unison and trading solos throughout. A thinly veiled homage to getting high, lyrics tell the tale of a stoned drifter meandering through life as Verlaine coos, “I sleep light on these shores tonight/I live light on these shores/Elevation, don’t go to my head.

The simple “Guiding Light” follows and shows that Television, with their Punk aesthetics and technical proficiency, can write a Pop song as well as anyone else. A hypnotic riff pulsates from start to finish, and the band eschews dazzling guitar work for a little over five minutes. Despite the lack of flash, the song never loses its sense of quiet urgency. This song would not be out of place on the Velvet Underground’s 1969 self-titled masterpiece. Unlike the Velvet’s though, the song, while certainly sounding melancholy from a music standpoint, has vocals and lyrics that verge on soaring triumph.

The album’s second and last single, “Prove It” was the blueprint for ’90s Alternative. Dropped in 7″ format on July 22nd of 1977, it possesses a quirky riff, a stop-start vocal, and a shuffling drumbeat. Along with a snarky delivery on vocals, this is the stuff that spawned the mix of Pop, Rock, Funk, Reggae, and Garage Rock, which defined a generation fifteen years later. A bouncy guitar solo before the last verse has been borrowed by countless bands since. Finally, the song closes with the same upbeat soloing punctuated by power chords, a hard/soft/hard sound that was incorporated to great acclaim by bands like The Pixies and Nirvana.

The eighth and final cut, “Torn Curtain” has the feel of late ’60s Psychedelic Rock with a plodding melody. Featuring intermittent splashes of guitar and cymbal crashes, they set the tone for a somber, extended outro with an escalating solo echoing the pits of despair. A powerful send-off for the band on their debut, it brings the entire breadth of Television’s talent to an almost funeral-like ending.

Believe it or not, Marquee Moon is reviled as one of the greatest and most important albums in Rock-n-Roll history. For a band born and bred in the seedy streets of lower Manhattan, who came to be during the time of the Punk explosion, Television was able to transcend the movement and deliver a lean slab of vinyl that was rife with smart lyrics, top notch musicianship, and so much more than the garden variety screw the establishment rhetoric of their contemporaries. So anyone who is not up to snuff on this often misplaced part of Rock history, Television’s Marquee Moon will rattle your brains and leave you begging for more even four decades after its initial release. 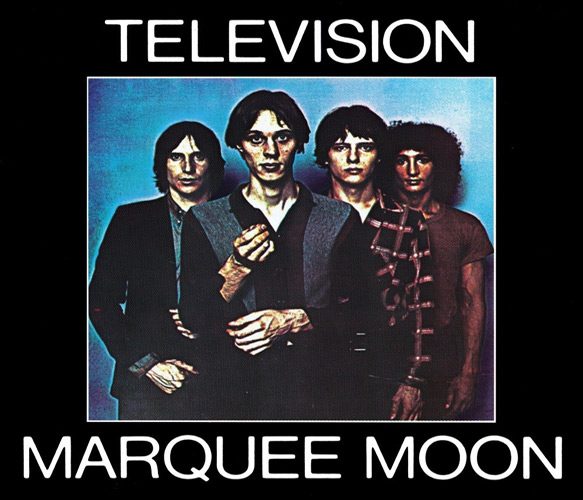