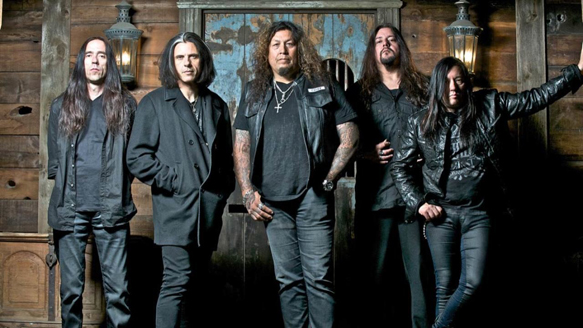 Despite their fair share of lineup upheaval and health concerns from about the mid-nineties to just past the millennium, consistent quality of output has become a hallmark of one of Thrash Metal’s elder titans, the finely aging Testament. The San Francisco Bay area of California was the hotbed of this fast and frenetic branch of the Heavy Metal tree, which gave birth to household names like Metallica, Exodus, Vio-lence, and Possessed. Beginning life in the early eighties as Legacy, the creation of Singer Chuck Billy and Guitarist Eric Peterson built themselves up over the course of three decades and ten studio albums, to the point where any discussion of the top of the genre of Thrash Metal must include Testament.

Nuclear Blast Records snapped up the band in 2008, and in October of 2016 they will imprint the release of album number eleven. Entitled Brotherhood of the Snake, the album follows up 2012’s Dark Roots of Earth, a heavy record of its own, and shows Testament joined now by Steve DiGiorgio (Death, Autopsy, many others) on bass guitar and, once again, Gene Hoglan (SYL, Dark Angel) on drums. Since 2005, long time Guitarist Alex Skolnick remains in the fold, adding his incredible talents to a band showing no signs of relenting.

The cynical Metal fan may feel that Testament, like Anthrax, Slayer, Metallica, and Megadeth, at this point in their careers might not have too much more to say musically, instead living mostly to tour their respective ‘classic’ material. Opinions vary, but out of the elder statesmen of American Thrash Metal, Testament, along with Overkill and perhaps Exodus, have demonstrated a tremendous ability to put out quality material, and this does not stop with Brotherhood of the Snake.

The inclusion of Gene Hoglan on drums is immediately evident as the opening title track explodes into being. Blast beat levels of intensity color this upbeat Testament stormer, as themes of ancient aliens visiting the Sumerian people thousands of years in the past come to blistering life. Soloing and arrangements are tops, led as always by the unique bellow of the Chief himself, Chuck Billy. DiGiorgio’s adroit bass runs are up front in a warm mix that, despite the sharp modern production clarity, keeps this sh*t heavy.

Testament rarely disappoint, and the opener is a damn good one. It is on “Pale King” where the band outdoes themselves. The hard as nails stomp of 1994’s Low album comes to mind here. Following a very melodic bridge section, the song again morphs back to the hard-hitting Thrash the band practically invented . . . only to surprise once again with a nice clean vocal arrangement on the chorus. “Stronghold” rips from the speakers with vintage Thrash ferocity, as catchy as it is heavy. A very strong opening trio of songs, something Testament has gotten good at doing on their last few releases, leading off with strength.

“Seven Seals” visits a theme of end times and the apocalypse, doing so with some majestic soloing. A slower, less impactful opening few minutes turns into a fine bit of riffage, and Billy’s voice on the chorus just sounds so damn good, the whole song comes together nicely. At this point in the record, Brotherhood of the Snake looks poised to be their best release since 1999’s unf*ckwithable The Gathering album.

There are less stellar moments on the record, however, if not necessarily bad ones. “Born In A Rut” comes off a bit hackneyed, threatening to dip the album down into something quite like a rut. Apart from this one, the grooves and the riffs are tried and true Testament, and as the album flows on, fans will recognize and cherish that. Nevertheless, the middle of the record experiences a drop in the killer confidence of the opening trio of songs. Yet, these tunes are still better than a lot of what is out there calling itself Heavy Metal these days, at least where American Thrash Metal and Groove Metal is concerned. The guitar soloing on “Neptune’s Spear,” for instance, is melodious and head-turning for sure, the melding of solo into rhythm section reminiscent of 1990’s Practice What You Preach album.

One show-stealing moment on the album has to be the intense four minutes of “Cannabusiness.” Full of rage and barely contained melodies, Testament explore a controversial subject with the gumption of a Punk Rock band. By the time “The Numbers Game” comes to an end, its martial and tension-building guts still splattered over the ear drums, fans of this long-running Heavy Metal institution should be well satisfied. Hoglan helps them create a very heavy, blasting album that will stand proudly in their canon, as well as serve to show the world that the true Thrash Metal crown has not entirely shifted out to Europe’s Kreator, Destruction, and Sodom. These Californians can still stand proudly with the best of them. CrypticRock gives Brotherhood of the Snake 4 out of 5 stars. 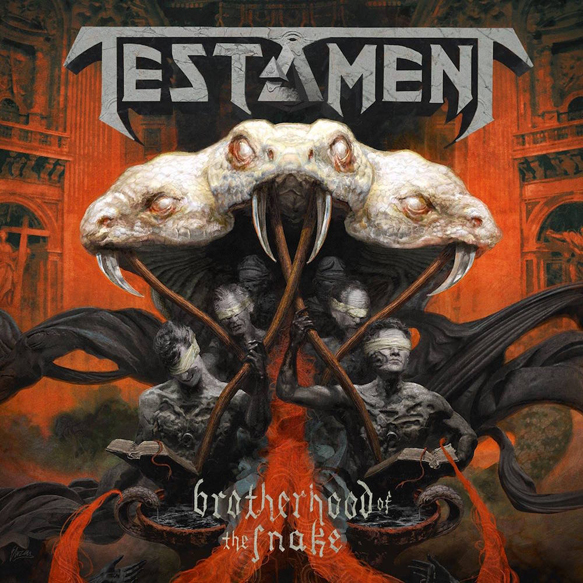