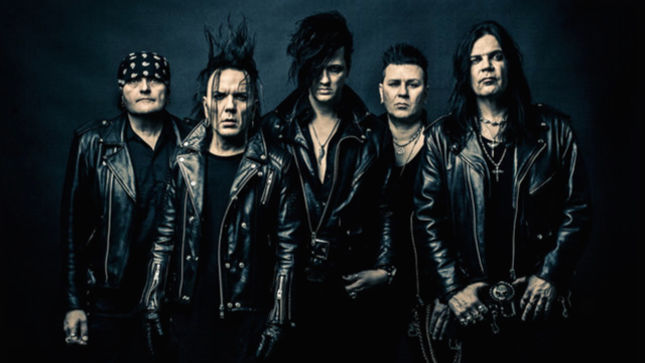 Helsinki, Finland’s The 69 Eyes have been in the Rock-n-Roll game for nearly three decades now. Made up of Jyrki 69 (Jyrki Linnankivi) on lead vocals, who has held that spot from their very formation back in 1989, Bazie (Pasi Moilanen) on guitar, with his fellow guitar slinger Timo-Timo (Timo Pitkäne), Archzie (Arto Ojajärvi) on bass, and lastly, Jussi 69 (Jussi Vuori) on drums, each member brings their own character to the fold. Emerging musically by releasing the albums Bump and Grind in 1992, along with Motor City Resurrection, released in 1994, both albums gave off a more Glam, Sleaze Rock sound, by the bands that influenced them such as Mötley Crüe and their Helsinki mates, Hanoi Rocks. While they began with a more straight-ahead Rock-n-Roll mixed with snotty Punk style, 1995’s Savage Garden offered a more Goth sound while keeping with their roots, having tracks like “Tang,” and “Velvet Touch.”

Continuing on, the band released 1997’s Wrap Your Troubles in Dreams and 1999’s Wasting the Dawn before starting the new millennium with 2000’s Blessed Be and Paris Kills in 2002. Perhaps a turning point in the band’s career, these two albums saw The 69 Eyes embrace their mysterious Vampire personas, with dark and romantic themes in their songs such as “Framed in Blood,” “Angel on my Shoulder,” a toned/slowed down version of “Velvet Touch,” and tribute track to fallen actor of 1993’s The Crow called “Brandon Lee.”

Well established in their homeland, and throughout Europe, it would not be until 2004’s Devils that the USA began to take notice to the talents of  The 69 Eyes. A record which helped the band make their first visit to America, they have since become a well-know name in the country, thus making them an international success going into the release of 2007’s Angels, and 2009’s Back in Blood, which is without a doubt their hardest rocking album sound-wise to date. Last releasing X back in 2012, it has been a quiet time for the Helsinki Vampires. In 2016, they are about to unleash their latest musical masterpiece, Universal Monsters, on April 22nd via Nuclear Blast Records. Produced by Johnny Lee Michaels, who has worked with the band since Blessed Be, he is dubbed as “the sixth Helsinki Vampire” by the “band of broods.” Marking their eleventh studio album, curious fans can rejoice that Goth and Rock is back with Universal Monsters.

Universal Monsters starts off on an immediate high with “Dolce Vita” with the guitar intro from Bazie and Timo, which is not only heavy, but true to the band’s Goth and Roll sound. Soon after, Jyrki brings in his well known, sensual, haunting voice, and if his vocals do not grab the listener, just watch the eerily creepy music video, explaining why the part of Monster in the title of the album is most appropriate. Next comes the lead single off the album, “Jet Fighter Plane.” Taking on a more melodic, mellower edge to it as opposed to the hard and heavy guitar oriented “Dolce Vita,” the two different tracks equal a wonderful start to the album.Following next with “Blackbird Pie,” “Lady Darkness” comes on with full-on romance that The 69 Eyes are so known for with their fanbase. On the latter song, there are some high-pitched vocal tones from Jyrki as he sings the choruses, something possibly not heard before from him when he hit notes with “I’m coming home.” This sets “Lady Darkness” apart from anything else on the album, and it will definitely get bodies moving.

Moving along, “Miss Pastis” starts off fast musically and enters in a organ in the background, something extremely new and experimental for the band. Featuring a French sung chorus, the song’s vibe and Jyrki’s voice may remind some of the growly Billy Idol in the song “Rebel Yell,” especially in the versus. Next, “Shallow Grave” slows the musical pace down, just a little from the tracks prior. Featuring a verse that is very thick on Archzie’s bass and Jussi on the drum, a highlight of this one is the combined voices as the band sings the choruses, providing a very wonderful touch. Keeping the melodies compelling, “Jerusalem” opens with a beautiful, mysterious sounding keyboard before Jryki’s deep voice takes over.

More guitar driven, “Stiv & Johnny” is complemented by a dark Gothic Rock vibe similar to that of Danzig. Then, combining the guitars with more keyboards, “Never” comes on with a more upbeat opening before more romantic clean guitar work underneath Jyrki’s passionate voice in the verses. Defined by a catchy chorus that will have many humming with long after listening to the song, it is just another highlight of Universal Monsters. Going for a more mellow sound, “Blue” is a distant dreamy song with a simple, airy beat and some fitting piano notes, effective guitars, and impassioned Vampire-like vocals of Jyrki. Ending the album, The 69 Eyes go back to their earliest roots with Bump and Grind on “Rock-n-Roll Junkie,” which is the ultimate closing to such an incredible album already.

Universal Monsters can be compared to anything from their previous releases; it can be said that they went back to their Johnny Lee roots, with the sound reflecting that of the Blessed Be or Paris Kills era with some lighter elements of their harder material, like the opening track, “Dolce Vita.” With that said, this album is a welcomed one by The 69 Eyes fans. Sadly, the band has not toured the U.S. since late 2009 in support of Back in Blood. Hopefully Universal Monsters will see the Helsinki Vampires back on American soil soon. The band already have shows scheduled throughout Europe, starting April 24th in Switzerland, taking them until late fall in October in Ukraine, so now North America waits. Until then, fans are urged to pick up Universal Monsters for this epic return from The 69 Eyes. CrypticRock gives this album 4 out of 5 stars. 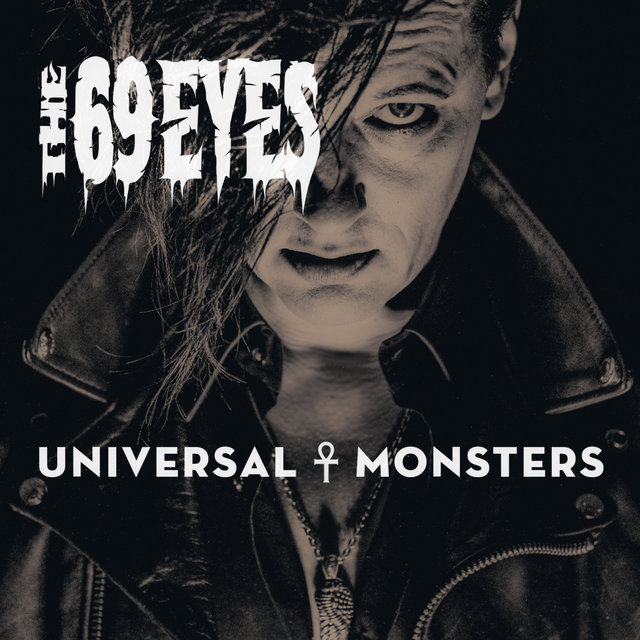