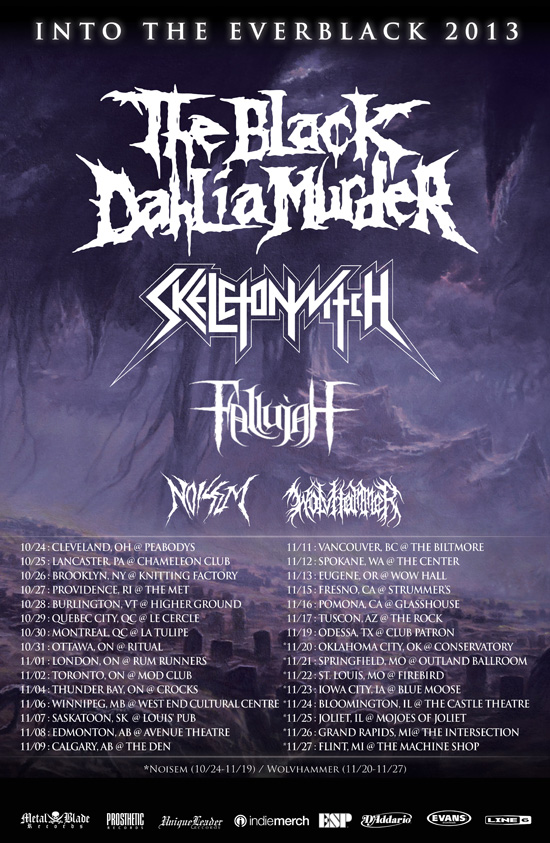 The Black Dahlia Murder will be embarking on a headlining tour across North American this Fall. Joining them for this particular run are Skeletonwitch, Fallujah, Noisem (10/24-11/19), and Wolvhammer (11/20-11/27). The tour will begin on October 24th in Cleveland, OH and ends on November 27th in Flint, MI. The confirmed list of shows is below, and on the band’s facebook page: facebook.com/theblackdahliamurderofficial.

The Black Dahlia Murder just returned home from a long summer on tour as part of the Van’s Warped Tour. At the Ventura, CA stop of the tour, Brian Eschbach, Ryan Knight, Max Lavelle, and Alan Cassidy, recorded their parts for “Into the Everblack” from the band’s new album, “Everblack.” The performance is streaming now at metalblade.com/bdm. Additionally, videos for each individual performance have been posted at youtube.com/blackdahliamurdertv.

The Black Dahlia Murder’s new music video for “Goat of Departure” was also recently made available, and be seen on youtube The video, directed by Ben Mayer, was filmed in the band’s hometown of Detroit, MI last month. In typical TBDM fashion, it is over-the-top and even features the return of a classic TBDM character, and a real, live goat.

“The are few bands in death metal more accomplished, consistent, and plain likeable than The Black Dahlia Murder.” Terrorizer Magazine

“[TBDM] embody what modern death metal should be: immediate, ferocious, and wrapped in a coffin of awesome riffs. And that’s exactly what you get on the band’s fantastic new album.” MetalInjection.net