The Burning – Still Smouldering After 35 Years

In 1980, Harvey and Bob Weinstein, then concert promoters, were desperate to get into the film business, and the most sure-fire way to accomplish that was to jump on the Horror bandwagon. As a result, Bob and Harvey formed Miramax and produced as well as co-wrote (Bob), along with Peter Lawrence (The Sins of Dorian Grey TV Movie 1983, The Real Adventures of Johnny Quest TV Series 1996), one of the most underrated, and possibly best Slasher films of the 1980’s, The Burning, starring Brian Matthews (Santa Barbara TV Series 1986, Murder, She Wrote TV Series), Leah Ayres (Bloodsport 1988, Freddy’s Nightmares TV Series 1989), Brian Backer (Fast Times at Ridgemont High 1982, The Money Pit 1986), Jason Alexander (Pretty Woman 1990, Seinfeld TV Series 1990-1998), Lou David (The Gumball Rally 1976, The Last Dragon 1985), and directed by Tony Maylam (Director: The Riddle of the Sands 1979, Split Second 1992). 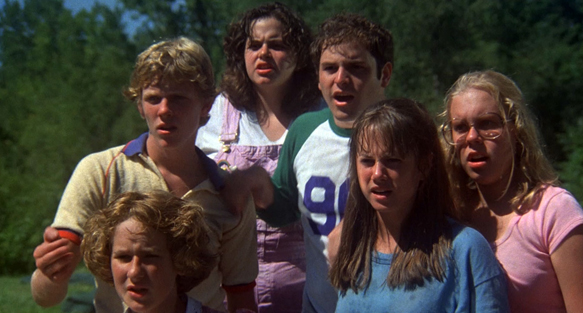 With an estimated budget of $1,500,000, The Burning was shot from Aug 21st, 1980 to September 20th, 1980 on location in North Tonawanda, New York, and nearby Buffalo, New York. With such a short window for filming, everything was done with a sense of urgency to get the film into theaters. The cast was a wealth of talent, though at the time mostly unknown. Brian Matthews played Todd; the heroic male counselor and moral compass and Leah Ayers played Michelle; the female head counselor, who is dating Todd. Lou David played the malevolent Cropsy, the victim of a prank gone wrong by Todd and his friends when they were younger, that resulted in Cropsy being almost burned to death. The cast is rounded out by Jason Alexander as the wise-cracking Dave, Larry Joshua as the bully; Glazer, who was in reality the oldest cast member, Fisher Stevens as Woodstock; Dave’s best friend, Brian Backer as the skittish, whimpy Alfred, Ned Eisenberg as the horny and slightly aggressive Eddie, Carrick Glenn as Sally; the hot chick and Glazer’s woman, and finally, Holly Hunter plays the blink-and-you-will-miss-her part of Sophie.

No other early Slasher, or Horror film for that matter, produced as many future mega stars as The Burning. For Alexander, Stevens, and Hunter, The Burning was their cinematic debut, but from the parts that Alexander and Stevens played, the viewer would be tricked into thinking they would been acting a lot longer. Jason Alexander brought all his comedic talent to his first role that he still shows today. His character, Dave, had a joke every time he talked, whether it was mocking Glazer’s overly New York accent, or joking about Woodstock “beating his schlong.” Dave was also the corrupter of his cabin, buying dirty magazines and condoms for his bunk-mates, making him probably the coolest guy at camp. While Jason Alexander was the standout, the entire cast was a great ensemble that played their parts well, especially with such a brief shooting schedule.

To produce a successful Horror film, one would need some top-notch special effects; enter Horror FX legend Tom Savini (Dawn of the Dead 1978, Day of the Dead 1985), hot off the successful and gory 1980 film Friday the 13th. He actually turned down doing the FX on 1981’s Friday the 13th Part II to work on The Burning because he did not agree with the logic that Jason Voorhees was now an adult. In addition, Savini also did some pyrotechnic work; his legs are those set on fire at the beginning of the film before Cropsy bursts out of the door engulfed in flames. While all the FX are magnificent, none are better than the wholesale slaughter of Eddie and the others on the makeshift raft where Cropsy slices and dices with his shears, even cutting off Woodstock’s fingers in a sick closeup. They say an artist is their own worst critic, and this rings no truer than Tom Savini satisfied, but not completely happy with his Cropsy makeup. Savini felt the makeup looked more like a melting than a burning and attributes this to having only three days to create Cropsy’s look. However, fans of the film find no fault in the FX whatsoever. 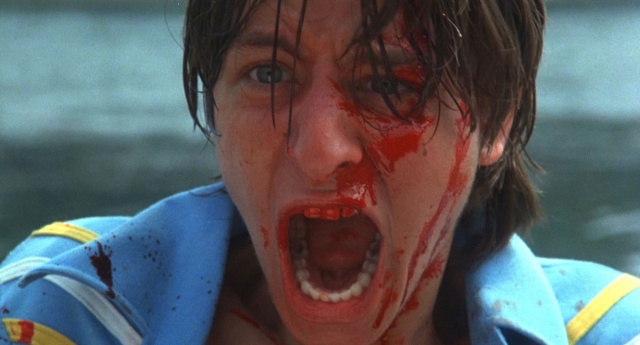 In April 1981, Variety reported that The Burning would premiere on May 8th in Florida on 110 screens, with a regional roll-out to follow. According to Variety, the film did especially well in Buffalo, near where it had been filmed. In June 1981, Variety described its performance as “sizzling,” saying “[it] … lit up Buffalo area screens this weekend.” The film played in three theaters and two drive-ins, bringing in an impressive $33,000. Regardless, interest soon fizzled, and the film suffered a more than 50% drop-off in box office receipts the following week. Despite this brief bright spot, overall Box Office for The Burning was initially pretty dismal. It lasted in the top 50 for only four weeks, with a take of just $270,508. Variety reported it received a “chilly reception” in San Francisco and Chicago.

Unlike in Buffalo, it opened elsewhere to stiff competition: it debuted at number 23 behind Slasher films Happy Birthday to Me, which was at number one, and Friday the 13th Part 2 at number two; however, The Burning also opened on far fewer screens than those wider releases. The Burning was released in Japan in September 1981 where it grossed $283,477 in just one week at four theaters. Eventually, it topped out at around $1,000,000 when it ended its run in Japan. It was not until November 1982 when The Burning was re-released in America with brand new poster artwork, showing the face with a fire reflected in an eye. The original production company, Filmways, merged with Orion Pictures, and was able to release The Burning into many more theaters where it grossed around $707,000. An ad in Variety from November 17, 1982 emphasizes the comparative success: “The Burning scorches New York! $401,258 in just 7 days.”

Like many films at the time, The Burning suffered from heavy censorship due to the events of the day. In America, it remained heavily trimmed for thirty years until the MGM DVD release in 2007 when all the scenes were restored. The British cinema release of The Burning was severely cut as well by the BBFC, receiving an X-certificate on September 23, 1981 with cuts to the scissor murder of the prostitute and some gore during the raft attack. When the film was accidentally released uncut on video in the United Kingdom by Thorn-EMI, the tape was liable for seizure and prosecution under the Obscene Publications Act. Thorn-EMI had unwittingly released a “video nasty,” a term used to coin films judged as obscene and too violent for home rental. They tried to rectify matters by reissuing a BBFC approved version. The original uncut Thorn-EMI release is worth a great deal of money today. In 1992, the United Kingdom video re-release suffered additional cuts to the raft attack, plus cuts to the killing of Karen. It was finally released fully uncut in 2002. 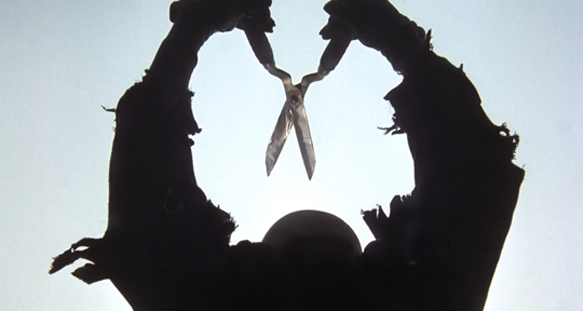 The climax of the film went through a few changes. Earlier drafts of The Burning had the final scenes with Todd, Alfred, and Cropsy in a cave, however, when they went to shoot, it was full of bats. Another cave was scouted, but it collapsed soon after it was discovered. One draft of the script even had a lair for Cropsy where he is looking over old newspaper clippings. The mine still works fine though, because it seems organic. It is totally plausible that an old mine exists around the area where the kids were camping.

Critically, The Burning received a mixed reception at the time. Time Out wrote, “Suspense-wise, it’s proficient enough, but familiarity with this sort of stuff can breed contempt.” Again, like many Horror films at the time, the fan appreciation has grown. The Burning currently holds a 100% fresh rating on Rotten Tomatoes. to throw in a bit of a comparison: Friday the 13th only holds a 58%, My Bloody Valentine holds a 40%, Halloween holds a 92%, Nightmare on Elm Street 94%, The Texas Chainsaw Massacre holds a 88%, and Psycho holds a 96%. Thirty-five years later, The Burning still manages to astonish, especially after languishing in obscurity until the 2007 MGM DVD release. With the 2013 Blu-Ray release from Scream Factory, The Burning found new life and new fans, thus making it a relevant part of Horror film history all these years later. 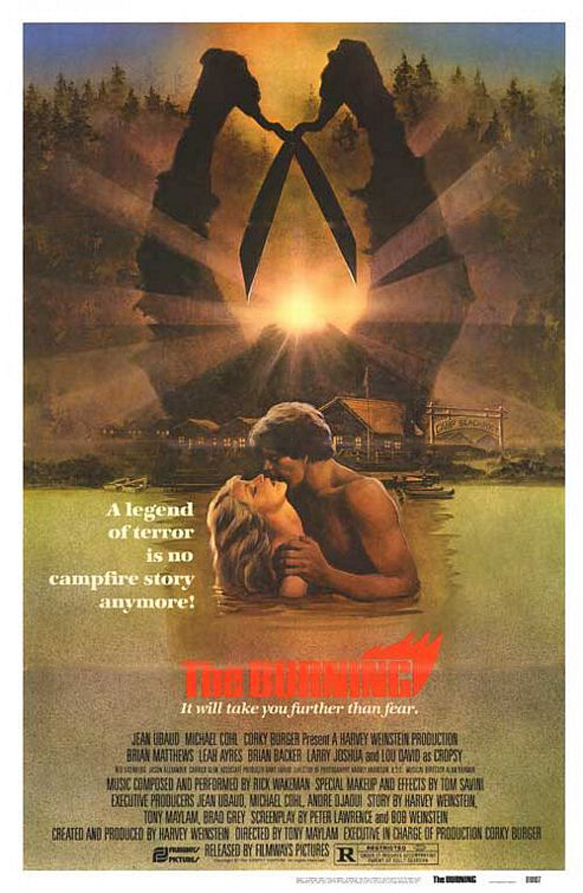 Purchase The Burning on Blu-ray/DVD on Amazon