Director James Wan has been a successful horror film director for some time now. Actively in the industry making a name for himself as the creator of the Billy the puppet from the Saw films, Wan went on to executive produce the Saw sequels. In 2007 he directed his first horror film Dead Silence. He followed in 2011 with a relatively positively received film in Insidious (2011). Now in 2013 Wan brings audiences The Conjuring. The film was a major summer box office success with rave reviews from fans and critics alike labeling it the scariest movie in years. 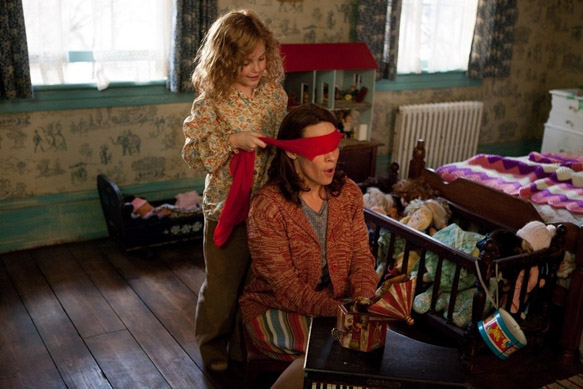 The movie is reportedly based on a true story of paranormal investigators Ed and Lorraine Warren’s encounters with The Perron family in Harrisville, Rhode Island. During the production of the film the real Lorraine Warren, now 86 years of age, consulted director Wan on the events which occurred. According to Warren the film portrays a great deal of the events accurately. Whether this is fact or fiction it makes for a great story. Those who have no knowledge of the true story it is recommended to do some reading prior to watching the film with exception for the type of movie watcher which prefer having no knowledge of the inspiration of the story upon first view.

The film begins with an opening clip of introducing paranormal investigators Ed and Lorraine Warren played by Patrick Wilson (Insidious 1 & 2) and Vera Farmiga (Bates Motel (2013). The film immediately takes off into showing a family moving into a house. There is absolutely no story leading up to them moving into the house as to why they are moving, who they bought the house from, or anything else. Viewers who have seen Wan’s films in the past understand he tends to like to leave information out and not have plots flow evenly from the start, so one can only hope some back story is developed at some point in the film. Immediately the audience is introduced to Mr. and Mrs. Perron played by Ron Livingston (Office Space(1999) and Lilly Taylor (Say Anything(1989). They and their five daughters start to experience strange encounters directly from the start. While playing a game of hide and clap they discover a basement. One would think if someone purchased a home they would figure out there was a basement if there were windows in the foundation and where did they think the heating system was? Nevertheless the family discovers this basement full of antique items belonging to the previous owner. It is at this point in the film things continue to get weird. The children start seeing things, the mother gets unknown bruises, and the father seems clueless. Frightened about what is happening in their new home Mrs. Perron attends one of Ed and Lorraine Warren’s demonology seminars. Wan again leaves out any detail in how she found the Warren’s. A scene with her looking up a phone number or even driving to the seminar would have been sufficient. The film then takes on a modern day Poltergeist (1982) feel with the Warren’s coming to investigate the house. It is determined the house is possessed and we are provided with a little bit of a back story of the history of the property. Leaving not much room for breathing the film immediately takes off into the final sequence of demonic possession of Mrs. Perron. There is some creepy imagery in the possession scene but slightly seems like a takeoff of William Friedkin’s Exorcist (1973). 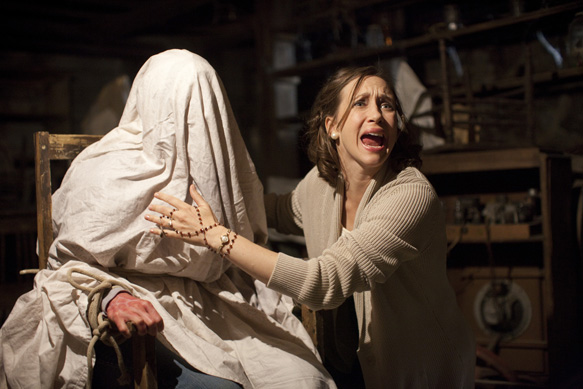 There are some well executed scares in The Conjuring with tension build ups and sudden frights. The film relies strongly on imagination opposed to visual effects which is refreshing to see in 2013. It is also rather refreshing to see a horror film with enough genuine frights to get an R rating in 2013 with so many watered down PG-13 ratings. The biggest down fall of the film is the complete lack of story. Where Wan succeeds in scaring the audience he fails to create a deeper understanding of the characters. One could only imagine how much more effective the film would have been if they knew even a small back story of The Warren’s and The Perron’s. Patrick Wilson and Vera Farmiga did a fine job portraying The Warren’s. Farmiga puts on a strong performance with emotion and believability. Wilson equally matches Farmiga’s performance and they have good chemistry together on screen. Ron Livingston and Lilly Taylor on the other hand have no chemistry portraying the Perron’s. Livingston’s acting is uninspired, unemotional, and just plain poor. There were scenes where think the horrors going on around him should have provoke a more emotional reaction. Taylor’s acting is not nearly as poor as Livingtson’s but she is not a believable loving mother and viewers have no emotional attachment to her character.

Overall The Conjuring is not a terrible horror film by any means and in 2013 it does stand out. Wan clearly wants to frighten his audience and not gross them out. If he finds a way to develop his stories and characters around the frights his future films could be the saving grace of the horror genre. For now, films like The Conjuring simply lack key ingredients to hold up to classic horror films of years past. CrypticRock give The Conjuring 3 out of 5 stars. 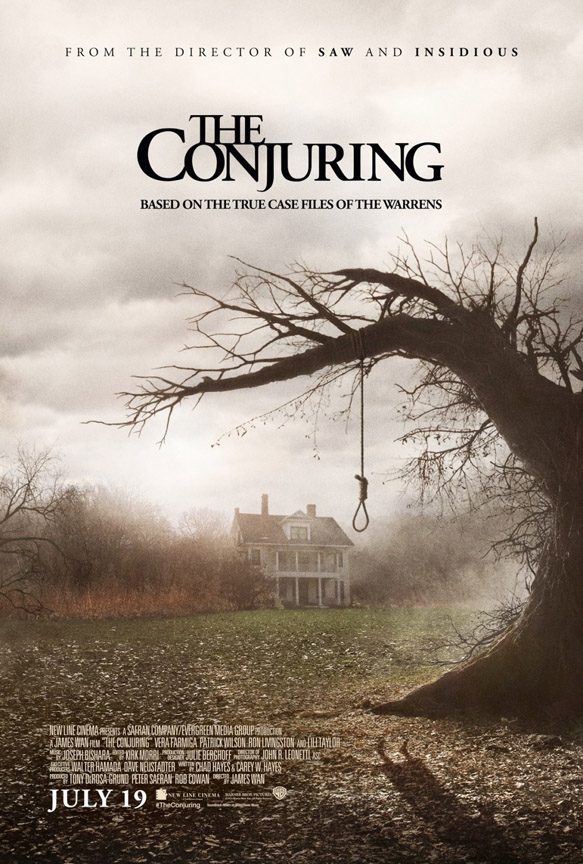