Many music fans and critics who are familiar with The Damned regard the band as one of the pioneers of English Punk music, and this remains to this day a fair homage. After all, the band’s first three albums—Damned Damned Damned (1977), Music for Pleasure (1977), and Machine Gun Etiquette (1979)—were among the earliest proper Punk releases that served also as templates for the music of many Punk-classifiable bands that subsequently emerged in the advent of the 1980s—best characterized by short and straightforward songs with confrontational and usually politically oriented lyrics as well as instrumentation that focused more on abrasiveness than on artiness. However, by the time the excitement of The Damned’s then members for what was Punk had fizzled out, there erupted too their brewing musical discontent which translated into a style that they seemed to have taken after the ’60s-rooted Psychedelic and Art Rock of bands like Love in particular and the dark musical undertones of pre-’70s Gothic/Horror films and scores.

Thus what began as simple Punk ditties had evolved into textured and a bit progressive New Wave / Gothic Rock songs. This should not come across as overtly surprising, especially for their musically attentive fans, for the music of The Damned even during their Punk beginnings has always been quirky and melodic anyway. This lushness best defined their 1980s-released albums, among which Phantasmagoria may be regarded as the pinnacle of such creative indulgence.

Released in July 1985, Phantasmagoria opens with “Street of Dreams,” which begins suavely with a short horn-led jazzy and bluesy instrumental bit and then transitions into a foot-stomping and head-shaking driving uptempo beat. The progressive drama of the mid-song instrumental interlude further uplifts the song, but the Flamenco-style Classical-guitar adlib and the interplay of the fast, marching drumbeat and the horn section in the coda highlight the ultimate transformation of The Damned’s music from Punk’s simplicity to New Wave’s artisticness.

One of Phantasmagoria’s singles, “Shadow of Love” is powered by a sinister-sounding, subtly reverb/flanger-soaked guitar plucks and rolling bassline, effectively serving as a cold bed for the vocal’s big haunting sound. The album’s guitar-oriented rocker, “There’ll Come a Day” is a waxed and polished innovation of the early sound of the band as heard in songs like “Neat Neat Neat,” “New Rose,” and “Problem Child.” In the next track, “Sanctum Sanctorum,” the band was obviously channeling its Horror film-score inspirations; it is an orchestrated piano ballad complete with a Bach and Wagner-inspired intro and outro (“Toccata and Fugue in D Minor” and “Ride of the Valkyries” come to mind).

The next triumvirate of songs is the highlight of the album, in which the listener will find The Damned in their most engaging and poppiest moments. Because of this, many fans of the band usually cite the catchy, very melodic, and dancefloor-worthy “Is It a Dream?”, “Grimly Fiendish,” and “Edward the Bear” as their most favorite songs in the entire The Damned discography. These songs were actually the template that the band used for their subsequent album—1986’s Anything, where its cover of Love’s “Alone Again Or” may be found.

The eighth and second-to-the-last song, “The Eighth Day” is another feel-good mild rocker that features spiky and scaly guitar adlibs and organ melodies on a backdrop of choppy rhythm section. Finally, The Damned finishes off Phantasmagoria astoundingly with the well-conceived and well-arranged jazzy, New Age-sounding instrumental called “Trojans,” emphasizing the progressive transformation of the band’s music. Alluding to the mythological Trojan horse, The Damned was able to sneak its way into the heart and senses of its longtime fans without their realizing that the music of the band that they love was no longer the same—not simple anymore, but instead better and more interesting for its structural intricacy.

Formed in 1976 in London, England, by lead vocalist Dave Vanian, guitarist Brian James, bassist (and later guitarist) Captain Sensible, and drummer Rat Scabies, The Damned is regarded as a pioneer of both Punk and Gothic Rock music. By the time of Phantasmagoria, only Vanian and Scabies had remained from the original lineup, with new members Roman Jugg (guitar/keyboards) alongside Bryan Merrick (bass), and augmented in the studio by Andy Richards (additional keyboards), Luís Jardim (percussion), and Gary Barnacle (saxophone). The Damned went on a hiatus in the late ’80s and was only sporadically active in the mid-’90s, releasing an album, Not of This Earth, in 1995. Two more albums were released in the decade that followed—Grave Disorder (2001) and So, Who’s Paranoid? (2008). Constant touring since the band’s return to activity seemed to have revitalized the band, which currently consists of Vanian (vocals), Captain Sensible (guitar), Monty Oxymoron (keyboards), Pinch (drums), and Stu West (bass).

In the musical and stylistic context of the current music scene, whether Rock or Pop, The Damned’s Phantasmagoria could still hold its badge and laurels amidst the slew of albums by younger bands in similar genres. It still has the power to cast a spell on music enthusiasts whose taste lays in the dark and stark, yet lush and melodic, side of music. 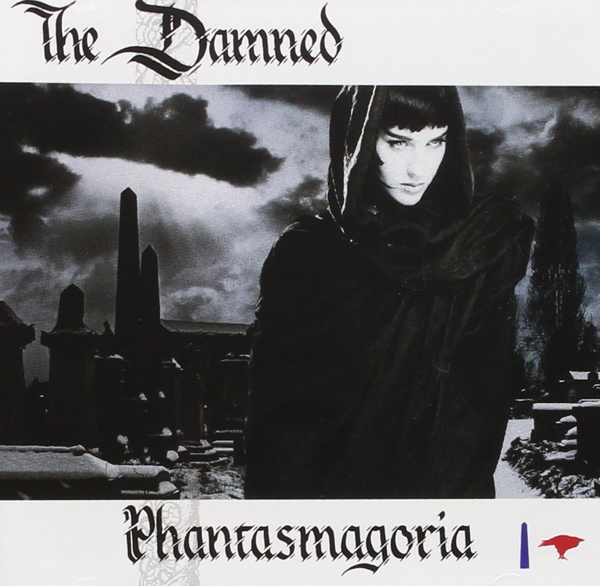