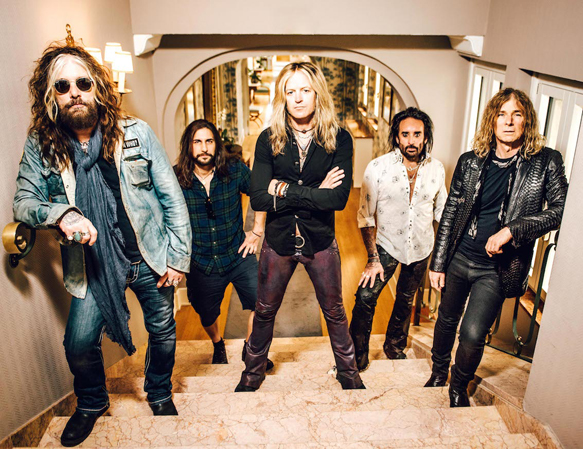 If Rock-n-Roll fans could define the term “super group,” what definitions would they come up with? Chances are that definition would include incredible musicians with accomplished histories, impeccable soul-touching songs, and fantastic live performances. Summing all that up, The Dead Daisies are one of the bands that are pretty equivalent to each of these points listed.

Departures of Fortus and Reed, to join the much anticipated Guns N’ Roses reunion line-up, The Dead Daisies reload with former Whitesnake guitarist Doug Aldrich to join Lowy, although, no one replaced Reed on keys since members have stated, “No one can replace Dizzy.” Now a five piece, the men have returned with fury on their third studio album, entitled Make Some Noise. Released on August 5th in The States and worldwide via Spitfire Music/SPV Distribution, Make Some Noise was produced by Marti Frederiksen out in Nashville, Tennessee. A Rock band through and through, for their third tour, The Daisies have taken influences from 1970s and 1980s Rock with the feel good vibe no one can deny.

Make Some Noise begins with their lead single “Long Way to Go,” a very guitar oriented, rocking track drenched with Corabi’s raspy sounding vocals. A strong impact to start, “We All Fall Down” comes in next with groovy rhythmic feel complemented by a deep bassline bringing it down a notch from the album’s opening track. This is before “Song and a Prayer” with its uplifting chorus, making it something that could easily be played on Rock radio. Then, coming on with a faster pace, “Mainline” is the type of cut to drive to, and easily exceed the speed limit. Saving the title-track  for the middle of the record, “Make Some Noise” is sure to be a crowd pleaser as a new Rock-n-Roll anthem at their live shows that everyone will chant along with.

Shifting toward the past, the band offers up two cover tracks in the second half of the album. First comes Creedence Clearwater Revival 1969 song “Fortunate Son.” A song covered by many artists since the original recording, The Daisies speed it up, creating a very respectful version that fans and fellow rockers will approve of. Thereafter, continuing to show veteran chops as musicians and providing quality compositions, “Last Time I Saw the Sun,” “Freedom,” and “All the Same” are just a few of the highlights dressing the track-list. Then, as the finale, their other cover wraps things up as they perform The Who’s “Join Together,” doing it justice, while adding their own flair. The Daisies themselves grew up with bands like CCR and The Who, so to bring forth bad covers of songs that influenced them would be pure blasphemy! Thankfully, they do not fail and did right by including them on Make Some Noise.

Fans will be able to see The Dead Daisies, depending where they are in the United States and overseas, as the band are currently touring in support Making Noise throughout Europe. In addition, starting August 10th in Wisconsin, they are the direct support on the summer KISS, Freedom to Rock Tour for a full month. Those looking for a bit longer of a Dead Daisies set, they will also be offering some headline dates hidden in their schedule, including a stop at Webster Hall in New York City on September 8th and the famous Whisky a Go Go in Hollywood on September 15th. That being said, Make Some Noise is a worthy addition to any Rock fan’s collection and is an album fans of The Dead Daisies will love more and more with each listen. CrypticRock give Make Some Noise 4 out of 5 stars.