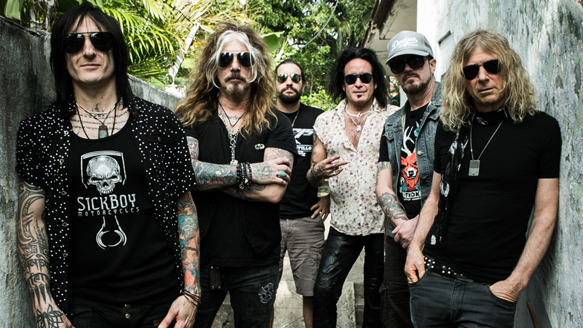 Back in 2012, a new project was born by the name of The Dead Daisies. Initially begun by former Noiseworks vocalist Jon Stevens and Mink guitarist David Lowy, the band has seen their share of success in the USA including being a part of Rockstar Energy Uproar Festival in the Summer of 2013, an opening slot for Kiss in the Summer of 2014, and supporting Whitesnake in the Summer of 2015. Releasing their self-titled debut album in 2013, with singles such as “Lock ‘n’ Load” featuring Slash, the band made a strong impression right off the bat. Sustaining some lineup changes for the live and studio sets, the band is now comprised of new vocalist John Corabi (Motley Crue, Ratt), new drummer Brian Tichy (Ozzy Osbourne, Billy Idol), Bassist Marco Mendoza (Thin Lizzy, Whitesnake), Keyboardist Dizzy Reed (Guns N’ Roses), Guitarist Lowy, and Lead Guitarist Richard Fortus (Guns N’ Roses, The Psychedelic Furs). Recharged, they returned with their sophomore album, Revolución, on July 31, 2015 via Spitfire Records. with a new lineup and the addition of drumming by Jackie Barnes (son of Jimmy Barnes, Scot born Aussie singer), as well as Backup Vocalist Bernard Fowler, the new record is one full of talent Rock lovers will salivate over.

Kicking off the record is also the first single, a song entitled “Mexico.” It is a typical hard beat from the early ’80s with a Van Halen lead guitar sound throughout which is amplified by likeable lyrics, “Mission bells/wishing wells/prison cells/Anywhere you wanna go/ we’re gonna ride to Mexico……Cali goodbye/I’m moving on/It’s do or die in Mexico.”

“Looking For The One” is also a hard beat of ’80s memories with fast fret action and drums to match. “Evil” and “Make The Best Of It” follow the same path of ’80s quality musicianship. The lyrics in “Make The Best Of It” say it all, “Well there ain’t much to say when you’re losing/ It’s an emotional waste of time/ You’ve got to make the best of it;” simple bare-truth lyrics that were once the mainstream back then.

“Something I Said” has a more mellow Rock beat, where the keyboards, piano, and guitars all seem to blend perfectly and smoothly. It then begins to mold into a heavier beat, more forceful, deep sounds, and a great repeated riff. “Get Up, Get Ready” has a real “blast from the past” sound with a Hammond Organ, so tell-tale of The Allman Brothers. That nostalgia continues with the vocals, “Get Up and Get Ready/Tonight, Raise your hands if you’re ready/ Tonight.” “Sleep” has a unique quality to it. This song should be the insomniacs anthem with words like, “Just me and my mind doing time/But time is but a thief/If I could only sleep/I’d finally be awake to see a dream—a dream of you and I/ If I could only sleep.” The slow easy keyboards and guitar sounds like a mind drifting into slumber. The harmonizing background vocals add to this dream-state feel to the song; very nicely done. “Midnight Moses” is another unique piece, with a blending of Rock -n- Roll, Latino beats with congas and bells, and then rounds off into rhythmic Rock with a steady, hard beat. The words add to the flavoring of the song, spicing it up just right; “Underneath the green veranda/Singing love songs to my Miranda/they call me the midnight Moses/Everything I touch is coming up roses.”

The two bonus tracks are good examples, still, of the Rock -n- Roll start to Heavy Metal. Track 14, “Leave the Truth Behind,” is a heavy, fast-paced song with quick lyrics, fast guitar, and drums that quickly catch up to the guitar fretting, as well as vocals that honor the genre perfectly. Corabi and his new crew do a great job on Track 15, “Last Night,” as he tries to remember exactly what happened the night before. He even goes as far as voicing the question, “Can you tell me what I did last night/ Oh my!/Cause I don’t remember anything!;” spoken in the true fashion of David Lee Roth.

The overall effect of this album is summed up in one simple word, nostalgia. The ’70s and ’80s were good times for music and those who loved it. It was a time of raunchy loudness, brutal honesty, outlandish looks, and Rock -n- Roll taken to a new Metal arena that would have knocked the bobby socks off of even The Big Bopper. It was happening with musicians that are playing on Dead Daisies. Those who played with Ozzy, those who played with Whitesnake and Thin Lizzy, and yes, although Guns N’  Roses came a bit later on, in 1987, it rocked just about everyone’s world. Heavy Metal was here to stay, Hard Rock was here to stay, and Dead Daisies is living proof of this with Revolución.

If the sounds of  ’70s and ’80s pure Rock-n-Roll like Bob Seger, Bachman–Turner Overdrive, Faces, Bad Company, and Lynyrd Skynyrd are being sought, then this release is a party for the ears. It is a step back in time with some famously, wonderfully talented musicians, so it is no wonder how perfectly reminiscent the beats are and the vocals from back in the day, when Rock was king and most clubs played live music by live musicians. The dancing never stopped, and this band would be playing all night. CrypticRock gives Revolución 5 out of 5 stars. 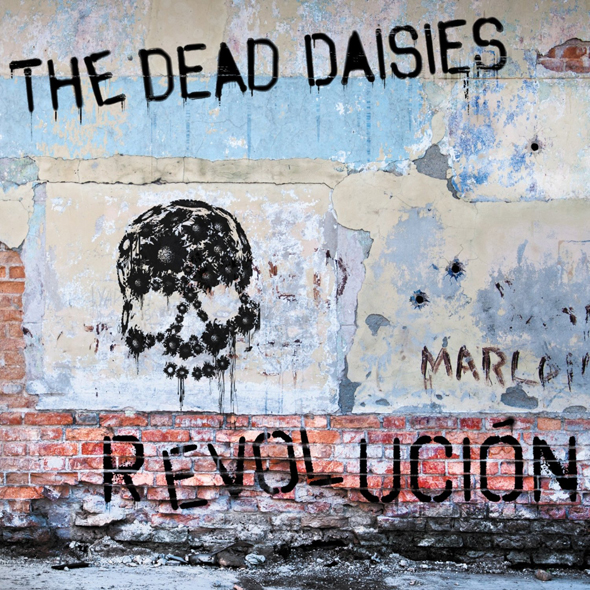