The Decemberists – What a Terrible World, What a Beautiful World (Album Review)

February 11, 2015 The Decemberists – What a Terrible World, What a Beautiful World (Album Review)

Grandiloquence has nearly always been the Decemberists’ mission statement. Formed in Portland, Oregon, in 2000 by frontman Colin Meloy, the Decemberists (comprised also of guitarist Chris Funk, keys player Jenny Conlee, bassist Nate Query, and drummer John Moen) wasted no time in breaking the mold of Indie Rock and Indie Folk. Their debut, full-length album, Castaways and Cutouts, was released in 2002 on the Portland-based label Hush Records and had no shortage of creative takes on Indie Folk or compositional ingenuity. The following two albums, Her Majesty the Decemberists (2003) and Picaresque (2005), were released on the Kill Rock Stars record label, an intermediary step between their humble, independent beginnings and their imminent home on the major record label Capitol Records. The instrumentation became more elaborate and the orchestration more eloquent in nature. Critics went as far as to compare 2006’s The Crane Wife to Jethro Tull and to describe 2009’s The Hazards of Love as “Prog-Folk.” By The King Is Dead (2011), much of the band’s Folk influence returned. This album is also critically important in the Decemberists’ discography, as it is the first album to reach #1 on the US Billboard 200 in early February, 2011. The King is Dead was Meloy’s reconnection with American folk music, which earned the band a nomination for Best Rock Song at the 54th Grammy Awards in 2012 for the single “Down By The Water.” The release of the single “Make You Better” in November, 2014, indicated a subsequent release of a seventh Decemberists album: What a Terrible World, What a Beautiful World on January 20, 2015.

What a Terrible World, What a Beautiful World is an inconsistent, shapeshifting thing. “Make You Better” seemed to point toward the notion that the album would be a commercially smug place of residence for the fourteen tracks. This umbrella for the album would be highly unfounded, as it changes stylistically with nearly every song. The most notable examples being “Cavalry Captain,” which resembles a half-Disco, half-Indie Rock hybrid, and “Easy Come, Easy Go,” which could easily pass as the theme song to a Sergio Leone film. There are plenty of goodies for longtime Decemberists fans, however. “Lake Song” and “A Singer Addresses His Audience” embrace the Folk elements that assisted the band’s rise to fame. At the same time (and with similar instrumentation), with “Anti-Summersong,” a shake of the finger to the radio hit “Summersong” from The Crane Wife, Meloy suggests that he is disinterested in reproducing similar Decemberists material, evidenced by lines like “I’m not going on just to sing another summer song.” The masterfully thought out instrumentation is one of the biggest selling points the Decemberists have ever had. The Decemberists knowingly comply with this trend, providing accordion, banjo, and mandolin on “The Wrong Year” and “Better Not Wake the Baby,” which display technicolor landscapes for the listener, coupled with the grooves. There are also moments on What a Terrible World, What a Beautiful World that remove the grandiosity from the compositions, isolating the vocals and baring the songs’ bones. The intimate Blues-influenced “Till the Water Is All Gone” and the Americana singer/songwriter Folk ballad “Carolina Low” present the Decemberists in a more personalized light. 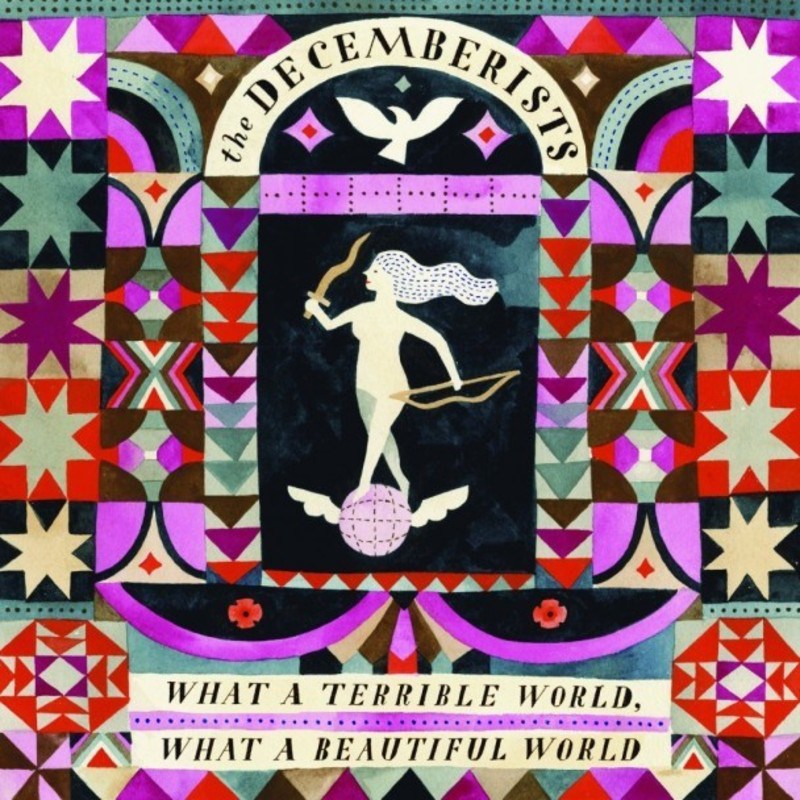 Album review, The Decemberists, What A Terrible World What A Beautiful World
Print page
0 Likes