Thirty five years ago, viewers witnessed the end of the Antichrist, Damien Thorn. This came in the form of the popular Omen series with 1981’s The Final Conflict: The Omen III starring Sam Niell (Jurassic Park 1993, Event Horizon 1997), Rossano Brazzi (South Pacific 1958, The Italian Job 1969), Lisa Harrow (The Last Days of Chez Nous 1992, Jessica 2004), Don Gordon (Bullitt 1968, Papillon 1973), and Barnaby Holm (Juggernaut 1974, Screen One TV series 1989). Produced by Harvey Bernhard (The Omen 1976, Damien: The Omen II 1978) and directed by Graham Baker (Alien Nation 1988, Born to Ride 1991), The Final Conflict: The Omen III saw release two years following Damien: Omen II and would be unfortunately met by negative reviews from critics, but has held up in the eyes of fans through the years. 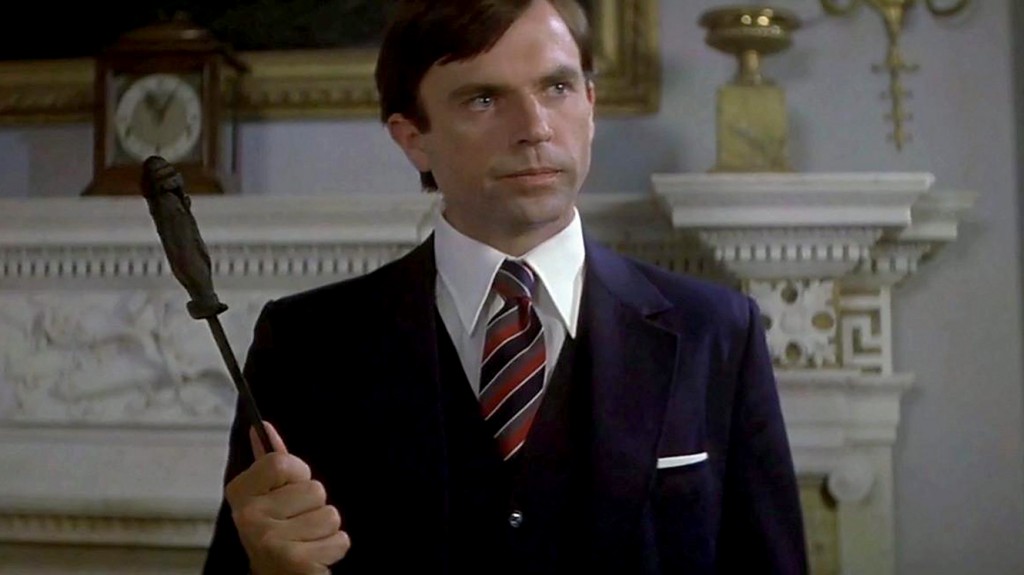 The film opens with an excavation of the Thorne museum that burned down at the end of Damien: The Omen II (1976). While rubble is passing along a conveyer belt, a worker finds one of the Seven Daggers of Megiddo and stashes it. Through a series of fortuitous events, the daggers end up in the hands of Father DeCarlo (Brazzi) in Italy where he and other priests set off on a mission to kill Damien Thorne (Neill), the CEO of Thorne Enterprises and the Antichrist, but Damien won’t go down without a fight.

The Final Conflict: The Omen III had an estimated budget of five million and was shot over twelve weeks in many different locations around England. The Deciples of the Watch scene was shot in Kinsley Quarry with around four hundred-fifty extras in the low light of four or five in the morning. The evening party scene was filmed in Brocket Hall, just outside London, which also substituted as Damien’s residence. Kate, Damien, and Peter walk from Hyde Park to Speakers Corner. This scene was shot in the Summer in the rain and dampness of London. The finale was shot at Fountains Abbey in Yorkshire. “Shooting here was very cold and very eerie,” according to Graham Baker’s commentary on the DVD. University of London Observatory in Mill Hill, London (identified as “Hendon” in Baker’s commentary) substituted for the Fernbank Observatory for The Second Coming sequence.

The Omen sequels had to do a bit of retconning to make sense of Damien’s age: he was a child in The Omen (1976) a teenager in Damien: Omen II (1978), and couldn’t have been an adult in his thirties by the time the film was released in present day times of 1981. As such, the movie significantly retconned the events from the first two films back further in the past to accommodate the serie’s story temporal shift.

Generally, sequels tend to get things wrong, but the one thing that The Omen sequels got right, was the casting of Damien. In Damien: The Omen II, Jonathan Scott-Taylor (The Copter Kids 1976, Julius Caesar TV Movie 1979) was cast as the teenage Damien and looked remarkably like the natural evolution of young Damien (Harvey Stephens: Gauguin the Savage TV Movie 1980, The Omen 2006) from The Omen. Sam Neill, in his first Hollywood/American role, was cast as adult Damien, and looks like the grown up version of Scott-Taylor’s Damien, even down to the hairstyle. Actor James Mason (20,000 Leagues Under the Sea 1954, Lolita 1962) had a hand in getting Sam Neill cast, as Mason acted as a sponsor to the production for Neill. Mason originally suggested to the film’s producers that they should check out Neill.

Thankfully, they signed him almost immediately to play the son of Satan because, Sam Neill shines with the abysmal light of darkness perfect for the Antichrist. Neill has played protagonists and antagonists, but none like the Antichrist. He plays the part masterfully and, as it would seem, with ease. The Final Conflict was the gorgeous Lisa Harrow’s first major film. She represents a sort of “Devil’s Temptation” to Damien. At one point, Harvey Dean calls her dangerous, but Damien does not care, not realizing the crucial role she will play. 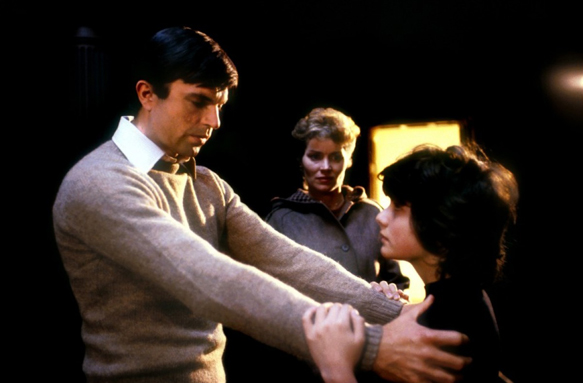 There were not many special effects in The Final Conflict, but the ones that were there were pretty great and done by Ian Wingrove (Return of the Jedi 1983, Captain America: The First Avenger 2011.) The first was the elaborate suicide by the American Ambassador in which it was a trap constructed out of typewriter ribbon, tape, and an umbrella. The gun was placed out of sight under the desk and when the door was opened, the typewriter ribbon pulled the trigger, creating a wonderfully disgusting headshot that sprayed gray matter all over the seal of the United States from a detailed dummy body. When it cuts back to the real actor, he has a gunshot wound just under his nose, complete with powder burns. His left foot twitches against the bottom of the desk to give a little authentic finality to the situation, and according to Graham Baker, was what made the actors cringe more than the gore.

The scene involving the death of the first Priest took around two weeks to shoot because they couldn’t get the angles right. The Priest fell from the rafters in a botched assassination attempt, in the television studio where Damien was being interviewed. The Priest’s foot was caught in the rope and he was swinging back and forth. He crashed through and got wrapped up in some cellophane set dressing and caused a fire when he swung into some chemicals. He kept swinging back and forth into the fire causing the cellophane to melt and encase him.

One of the most chilling sequences in the film starts off with Damien meeting the Disciples of the Watch, the Antichrist’s devoted followers, which consists of children, young men, old men, women, and priests. During the mass, each time Damien gives a command, he asks, “Do you hear me,” to which the mass replies in unison, “We hear and obey.” He commands them to slaughter all the children born between midnight and dawn on March 24th. The next day, Damien’s personal secretary, Harvey Dean, phones in the orders via briefcase phone to the watch. What follows is the gruesome dispatching of infants. One child is done in by drowning by the Priest who is baptizing him. Another way, is two boys tossing a ball over a wall and knocking a woman away from her baby carriage, which careens downhill into traffic where it is hit by a taxi. The viewer then sees a small trail of blood on the road with the mother’s screams provided as the overture.

Fortunately  all of the deaths are off-screen because there would be no way The Final Conflict: The Omen III would have seen the light of day if they showed anything close to what was suggested. The only time the viewer really sees anything beyond a suggested, is through a horrific vision of Barbara Dean (Leueen Willoughby: Superman 1978, Superman II 1980) where she sees her baby boy in his cradle with his face charred and eyeless. She then picks up the iron she was pressing her clothes with. The death of children in Horror movies, while not entirely rare, is not done very often, but when it does occur, it is most heinous. Look at the deaths of Gage (Miko Hughes: Kindergarten Cop 1990, New Nightmare 1994) in 1989’s Pet Semetary. The first time he is run down by a truck, and the viewer sees the kite jerk down and a bloody show roll away. The second time he dies, he is an evil little monster, but that makes it no less tragic when his own father has to be the one to kill him.

If The Final Conflict: The Omen III  has one failing, it is the weakness of the ending. The destruction of the Antichrist was built up to be something grand and violent, but was ultimately nothing more than a whimper. The only thing that could kill the Antichrist were the Seven Daggers of Megiddo, which were used in the previous two films in the series. In the first two films, it was said that all seven daggers had to be used on Damien. However, in The Final Conflict: The Omen III, the daggers are divided among seven priests. In the end, when Kate gets her hands on the last dagger, she stabs Damien in the back, which in itself was not too grand. He lets out a scream that seems to be several screams. Eventually, Christ shows up with light radiating down, and before he dies, Damien defies him by saying, “Nazarene, You’ve won nothing.” It is just lackluster. Perhaps because Damien was weakened by the second coming, only one dagger was needed, but it still leaves the viewer with a bit of a “that’s it?” feeling. Still, while the ending is not what everyone had hoped for, The Final Conflict: The Omen III is a solid film with solid acting and still holds up today, especially when looking at Sam Neill’s body of work since then, it is a really good experience to go back and see where he started.

While The Final Conflict: The Omen III may have been the conclusion to the original series, The Omen has lived on in many ways. First in 1991, there was the made-for-television film Omen IV: The Awakening, and 2006, the original 1976 classic was remade by Director John Moore (Behind Enemy Lines 2001, Max Payne 2008). Furthermore, more recently, The Omen sees life in the form of new A&E series Damien, which launched March 7, 2016. With that all said, The Final Conflict: The Omen III still holds a presence even thirty-five years after it’s release. 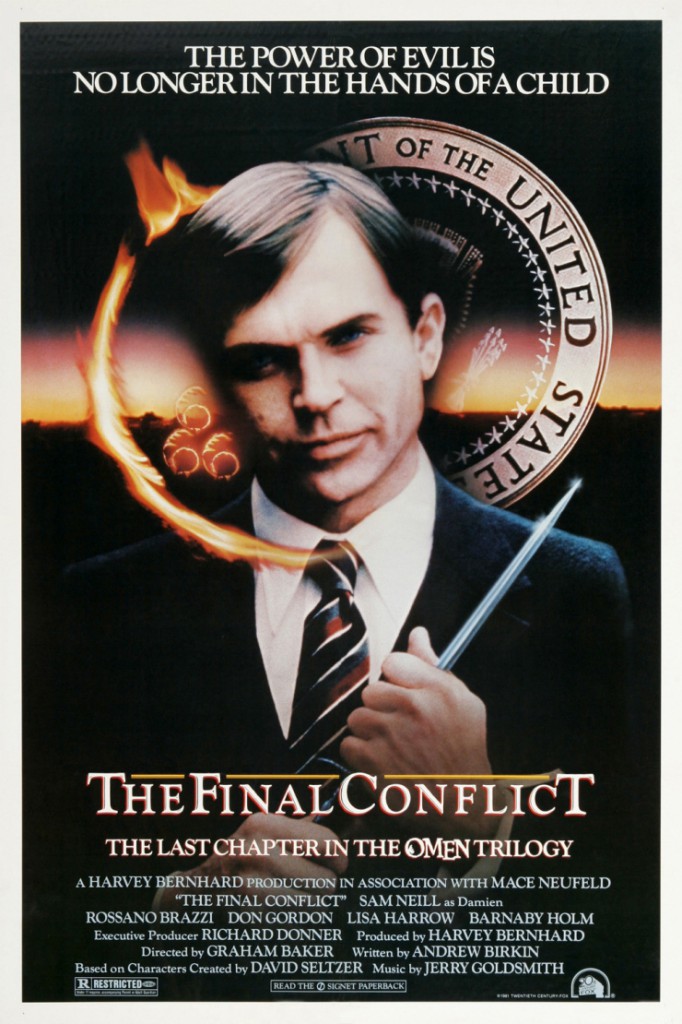 Purchase The Final Conflict: The Omen III on DVD on Amazon