The Ghost and the Darkness 20 Years Later

Back in October of 1996, a lot was going on in the world. The Dow Jones closed over 6,000 for the first time, the New York Yankees were on their way to their first World Series title since 1978, and Paramount Pictures was set to release the new film The Ghost and the Darkness. Released on the weekend of October 11th, the Stephen Hopkins (Predator 2 1990, Blown Away 1994) directed and William Goldman (The Stepford Wives 1977, The Princess Bride 1987) written screenplay follows the story of two man-eating lions feeding on those constructing the Uganda-Mombasa Railway in 1898. Set in Tsavo, Kenya, Africa, the film included sweeping cinematography, and had two all-star actors with Val Kilmer (The Doors 1991, Tombstone 1993) and Michael Douglas (Romancing the Stone 1984, Falling Down 1993) at the top of the bill. Now, twenty years later, the historical Horror-like film is worth giving a retrospective look. 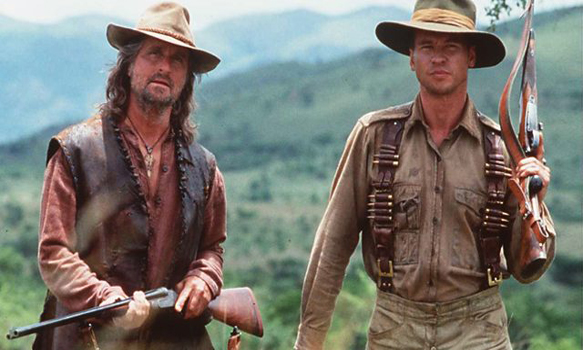 Superstitious workers fled the site after a particularly gruesome attack. Two male lions worked together, dragging people from their tents at night and showing uncanny savvy. Experts pointed to a drought as a cause for the lions’ odd behavior, but tribesmen feared the attacks stemmed from the desecration of the land, with the lions acting as supernatural protectors. The lions grow bolder, attacking during the daylight and evading Patterson’s efforts to capture or kill them. The crew turns against Patterson and the project when Patterson’s request for English soldiers for protection is denied. In the interest of progress, Beaumont hires famous big game Hunter Charles Remington (Douglas), who arrived with a group of Maasai warriors to help kill the lions.

The Maasai recognize in the strange behavior of the lions something otherworldly, and they name them “Ghost” and “Darkness” because of their insidious attack methods. They abandon the pursuit of the animals, but Remington stays. He and Patterson construct a new hospital to treat the injured while luring the lions to the vacated building which they baited with animal blood. Remington and Patterson shoot them and pursue when the lions flee. The lions perceive the trick and attack the new hospital, leaving a trail of carnage in their wake. Patterson and a baboon act as bait in the next trap, and Remington kills one of the pair. 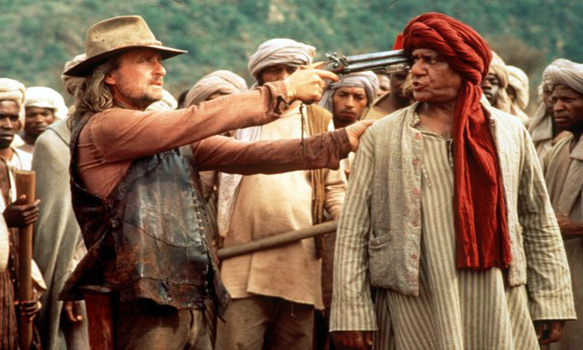 The men find the animals’ lair strewn with the bones of dozens of the lions’ human victims. A dream plagued Patterson in which a lion killed his wife and newborn infant. He woke to a new horror. The surviving lion had dragged Remington from his tent during the night and killed him. Patterson and Samuel cremate Remington’s remains and burn the high grasses surrounding the camp to flush out the lion. They battle with the lion on the bridge, and after a heated fight, Patterson wins. With the lions’ demise, the crew returns to complete the construction on time.

Clocking in at 109 minutes, The Ghost and the Darkness was rated “R” for adult situations, adult language, and violence. While not a Horror film per-say, the film had buckets of blood within it. Although, to today’s standards, many of the effects are dated, notably the lion paws during the attack scenes. Released on DVD back in December of 1998, there was zero special features, making for a sort of letdown. This is especially so since it was the dawning of DVD at the time and part of the drawing card for DVD purchase was the special features. There has yet to be a new DVD or Blu-ray release of the film since. Perhaps it was the questioned historical accuracy being questioned for the lack of any special features.

Research has been conducted concerning the historic accuracy or inaccuracy of the incidents in Tsavo. That said, the movie is based on the 1907 novel The Man-eaters of Tsavo by John Henry Patterson, the man who lived through the experience. Goldman adapted the story for the silver screen, and the move made excellent use of the “man versus nature” theme. Also, it featured a sweeping African scenery and employment of African actors lent credibility to an embellished plot. Douglas presented an approachable, yet enigmatic character in Remington, whose shocking death ultimately spurred the lead to “sort it out” and “finish the job.”

Winning an Academy Award for Best Sound Editing in 1997, The Ghost and the Darkness also garnered negative critical attention. In fact, Roger Ebert hated the film, calling it an “African adventure that makes the Tarzan movies look subtle and realistic.” However, David R. Ellis of Shark Night 3D (2011) fame listed the film as one of his “Top 10 Animal Horror Movies.” Critics were also very harsh on Kilmer, who was coming off of his Batman fame. He was even nominated for Razzie Award as Worst Supporting Actor. Despite some unfair criticisms, the film’s evocative soundtrack showcased storied Composer Jerry Goldsmith’s mood-setting and drama-building skills. Despite what some critics thought, fans of the film feel it provides plenty of tension and is terrifying. Above all, the film creates a fantastic atmosphere that leaves you on the edge of your seat all the way through. 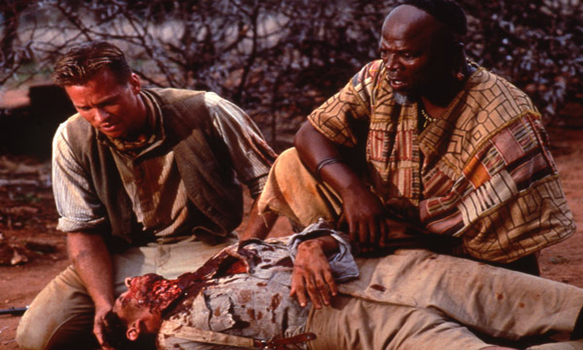 At the conclusion of The Ghost in the Darkness, Samuel explained the Chicago, Illinois Field Museum displays the stuffed remains of the lions, stating, “If you dare lock eyes with them, you will be afraid.” These taxidermies lack manes, which surprises many unaware that Tsavo lions are maneless. In the film, the lions boasted full manes, in contrast to reality, because the filmmakers suspected maned lions would leave a more fearsome impression. The displayed lions in Chicago are large and muscled, though, and Samuel is right, when staring into their cold gaze, fear is present. 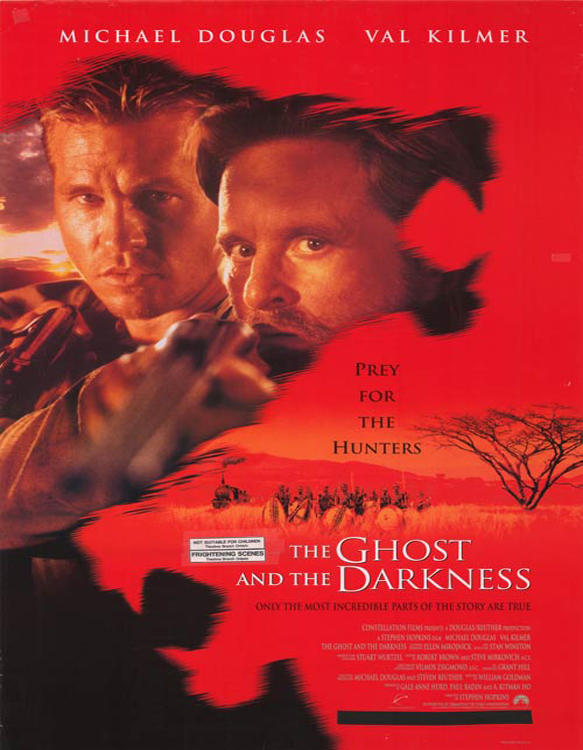 Purchase The Ghost and the Darkness on DVD on Amazon