Set in the wilderness somewhere in America, action-packed Horror film The Horde was released on May 6th via Gravitas Ventures. A 313 Films and Razors Edge Productions feature written by Actor/Producer Paul Logan (Days of Our Lives series, Mega Piranha 2010), and directed by Actor/Director Jared Cohn (Pernicious 2014, Sharknado 3: Heart of Sharkness 2015), Logan also stars as the main protagonist, John Crenshaw. Logan is known for his many roles in low budget Action films, and his hard work shows in The Horde.

John Crenshaw is a former Navy Seal and is in a happy relationship with his girlfriend Selina Duboix (Tiffany Brouwer: The Help 2011, American Horror Story 2016). John intends to propose to Selina over the coming weekend, but she derails his plans with a pre-arranged camping trip for her students. After a little coaxing John agrees to accompany Selina, Riley (Thomas Ochoa: Fantasy Oscars 2016, The Secret Life of Me 2016), Chris (Jack David Frank: Friends with Benefits 2011, Plane Jane 2012), Sheila (Elisabeth Ferrara: Felt 2014, A Week in London 2016), Hailey (Sydney Sweeny: The Ward 2010, The Unborn 2015), Rachel (Amana Godepski: Deadly Skins 2015, God’s Club 2015), and Charlie (Zac Goodspeed: Lavalantula 2015, The Eleventh 2016), and the group head to the woods.

After they set up camp, the group breaks up and they enjoy nature. John uses the opportunity of a quiet moment to propose to Selina, who ecstatically accepts. Not long after this, members of the group go missing. John discovers some of their bodies and realises they are being attacked by one or more killers. In the midst of protecting himself and Selina, Selina is kidnapped and held captive. John decimates his way through the woods to find her and get her back. He meets the psychos face to face, a bunch of mutants led by three convicts, Cylus Atkinson (Costas Mandylor: Saw IV 2007, Saw V 2008, Saw VI 2009), Wilson (Devin Reeve: The Ploy 2015, Cassidy Way 2016), and Stone (Matthew Willig: We’re the Millers 2013, Concussion 2015).

Upon breaking out of prison, the trio found the perfect location to begin making crack and use a bunch of local inbred flesh-eating mutants as their security. John, Selina, and the students happened to camp close by to their operation, adding another complication to the situation. The mutants include Earl (Vernon Wells: Mad Max 2 1981, Commando 1985), Razor (Tristam: Crave 2015, The Canals 2015), and Chains (Nils Allen Stewart: Planet of the Apes 2001, Daredevil 2003), who share a penchant for Jigsaw type torture. While John did not anticipate his weekend would include being hunted by a bunch of lunatics, the lunatics likewise did not anticipate John. He does not let anything stand in his way of getting his fiancé and any other surviving students back. In one night, all their lives turn into a nightmare, and John will not rest until it is finished.

While The Horde is full of action, blood, and gore with Logan doing his own stunts, and the protagonist is on equal physical standing as the killers, the story does not offer anything new to the genre. There are quite a few cliches in the film that detract from the story, and that may bore some viewers. The atypical Horror film set at night, in the woods, with a bunch of young people camping, drinking, and fooling around has been done a million times before. Horror viewers these days are much more discerning, and the expectations are higher. With the influx of talent and availability of Horror films, viewers want new, exciting, terrifying, and creative. That is not to discount the entertainment value of The Horde though. 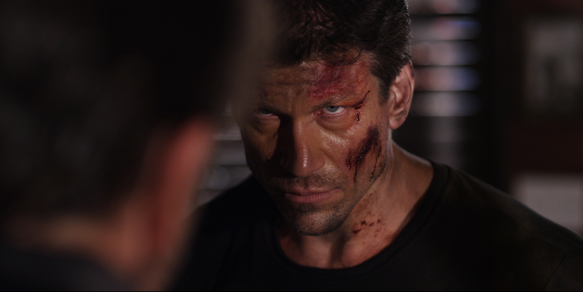 Logan shows great potential, and is multi-talented, so it would be great to see him extend himself further. The cinematography by Laura Beth Love (JailBait 2014, Sharknado 3: Oh Hell No 2015) is solid, and the special effects were well done, though not enough to lift the film. Overall, The Horde is a decent story, one worth watching for the action sequences alone. Any fans of Logan’s will be pleased with the shirtless scenes, and fans of strong protagonists will equally be satisfied. CrypticRock.com gives The Horde 3 out of 5 stars. 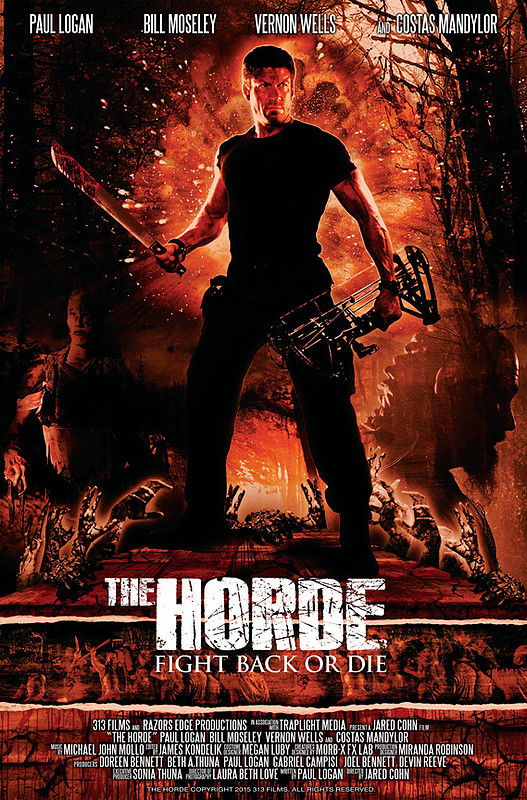