The House by the Cemetery – 35 Years of the Diabolical Dr. Freudstein

The film opens on a worn tombstone, then the camera pans over to a large, dilapidated Victorian house. Inside, a girl (the favorite Fulci female victim), Daniel Doria (City of the Living Dead 1980, The Black Cat 1981), is buttoning up her shirt and calling out for her boyfriend, Steve. When she does not hear a response, she starts exploring the house, calling out threats until she comes face to face with Steve, who is scalped and stuck up on a door with a pair of scissors. As she screams, a nasty looking knife plunges down from up high into the back of her skull and down through her mouth. Then, a nasty pair of hands drags her through the basement door with a trail of blood behind her.

Some time later in New York, Bob Boyle (Frezza) is staring trance-like at a photo of the house, but more so, at the little girl (Collatina) standing at the window in the photo. In walks his mother, Lucy (MacColl), who is trying to get things together for a move. Bob tells her of the little girl, but in true adult fashion, she dismisses it as a little boy’s fantasy. Meanwhile, Norman Boyle (Malco) is speaking with his boss, Prof. Muller (Fulci), and is advised to continue the research of his predecessor, Dr. Peterson, who was researching suicide before he killed his mistress, and then himself. While the Boyle’s travel to New Whitby, New England, it is revealed that the house they were originally going to stay in was rented out, and in a diabolical twist of fate, a new house, Oak Mansion, has been found. Little do the Boyle’s know, that they are walking into the jaws of death itself. 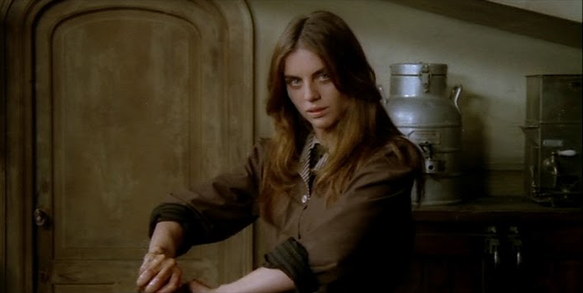 As was the case in the previous two films in the trilogy, Catriona MacColl stole the show with her striking beauty and performance as the all too fragile, Lucy. It is never disclosed why she is so, but the viewer can surmise that she suffered some kind of mental breakdown from the clues offered. From the very beginning, she is apprehensive about moving to New England, but does so for her husband and his career. During the commentary track on the Arrow Blu-Ray, it was revealed that Catriona MacColl was never able to have children, so she relished the chance to work with young co-stars. Silvia Collatina recalls that Catriona was very motherly to both Giovanni Frezza and herself off camera. Paolo Malco’s Norman kept his wits about him despite being pulled in multiple directions as a young professional trying to further his career, being a father, trying to keep his wife sane, solving the mystery of his predecessor’s suicide, and the potential savior of his family. Giovanni Frezza was only eight when he played Bob, but he played the part of the precocious child because, that is who he was. Silvia Collatina’s Mae Freudstein was enigmatic. She was only ten, and she and Giovanni became fast friends, spending time playing and just being children off set.

The House By The Cemetery is tonally different from City of the Living Dead (1980) and The Beyond (1981) in the fact that it has much more of a plot. In City of the Living Dead and The Beyond, the viewer is well aware of who the antagonists are right from the opening scenes: Father Thomas hung himself on hallowed ground, opening up the gates of hell in City of the Living Dead, and Schweik vowed revenge when the townspeople torture and entomb him in the basement of the hotel in The Beyond. However, in The House By the Cemetery, the killer is kept shrouded in secrecy other than a moldy, weapon-bearing hand, right up until the very end of the film, making The House By the Cemetery more along the lines of a Slasher film and, coupled with the large Gothic house setting, even somewhat of a Hammer Film; City of the Living Dead and The Beyond were more Supernatural Horror films. Also, in the aforementioned films, the viewer is moved from fantastical set piece to fantastical set piece, but The House By the Cemetery builds tension, even going so far as to setting up a couple red herrings concerning Norman having visited the town before, and possibly being the killer himself. The first time it is brought up is by Mrs. Gittleson, and Norman seems to take too long before coming up with an unconvincing “No.” There is also the matter of the exact house being in a rather large photograph in the Boyle’s apartment, and when Lucy points it out, Norman replies with shifty eyes, “Yes, it’s possible…” The ending ramps up the tension even more so as Norman and Lucy are dispatched one by one, leaving only Bob at the top of the stairs by himself trying to get out, only to be “saved” at the last minute by Mae. 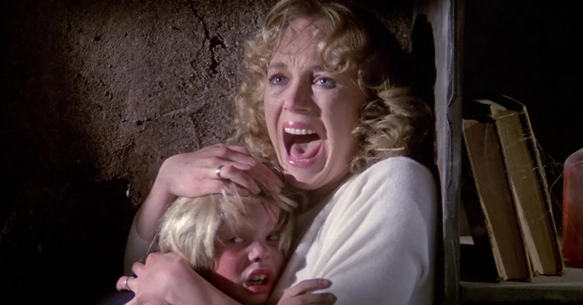 There was a significant lack of gore in The House by the Cemetery when compared to the other two films in the trilogy. Really, only four characters die on screen in The House by the Cemetery: the girl at the beginning, Mrs. Gittleson, Ann, and Norman. However, the absence of gore does not mean the provided FX helmed by Fulci’s go to guy, Gianetto De Rossi, were bad by any means. The death of Mrs. Gittleson was particularly barbarous as a spike, presumably used as a fire poker, stabs her twice in the torso then finally in the neck. When the spike is extracted, a copious amount of blood spurts out in glorious slow motion and the camera remains fixated on the wound as the blood rhythmically, slowly, pumps out. When Mrs. Gittleson is dragged down to the basement, the viewer will notice that part of her face has been somehow devoured. There was an eye gouge effect that was shot, but Fulci did not like the way it looked, so he cut it, but the prosthetic remained on Dagmar Lassander. The spike itself had a collapsable tip and was so smooth, that it looks like it really perforated the neck of Dagmar Lassander. Also, Dr. Freudstein moans every time he stabs Mrs. Gittleson, giving her death a tone of sexuality.

In the scene where the Boyle’s go down to the basement for the first time, they are attacked by a rather large, and undeniably fake, bat, which latches on to Norman’s hand. He has to stab it multiple times with a kitchen knife before it finally falls off and dies, but not before it produces ample amounts of grue. The bat scene was interesting because Catriona MacColl had a fear of bats and this scene, for some reason, helped her get over that fear. Paolo Malco also kept the mechanical bat used in the same scene.

As far as the memories the film created for cast memories, only nine years old at the time, Silvia Collatina states everyone was like one big family on the set of The House by the Cemetery. Although, she admits, she did not have much of a relationship with Ania Pieroni, saying, “I did not have any relationship with her. Perhaps she was angry with me, but who could blame her! After all, I cut her throat (laughs).” As fair as her experience with Fulci, anyone who know the stories, know he was infamous for being a brash individual. Collatina admits so, but overall exclaims, “I had a great respect for him and I tried to do my best. I knew he was a great director.”

While The House by the Cemetery is not everyone’s favorite of the trilogy, it certainly does not score any points with some naysayers with the dubbing of poor Bob. Per IMDB.com, the English voice of Bob was done by Lyle Stetler and The House By the Cemetery is his only film credit, but beyond that, there is no other info. It really is a crime because Bob had such a presence with his bright blue eyes and blonde hair. He was a cute kid…until he spoke. Even though the voice was done by a boy, it almost seems he did his best to sound like a woman and it really drags the film down every time he opens his mouth, which is often. In the Q&A feature on the Arrow Video Blu-ray of The House by the Cemetery, Giovanni Frezza humorously apologizes and begs forgiveness for Bob’s voice and admits that he had not seen the film until he was an adult and had absolutely no idea about the horrible dubbing.

If viewers were to watch The House by the Cemetery with the Italian audio, they would notice some subtle differences. For example, Bob’s voice is vastly improved, and some of the dialogue is different. In the Italian version, Norman is dead set on solving the mystery of Dr. Peterson’s suicide and does not hide it from Lucy. In the English version, Norman seems more interested in completing the research that Dr. Peterson was working on, with solving the mystery of his suicide as a secondary thought. Also, in the English version, Dr. Peterson was cheating on his wife with Sheila, whereas in the Italian version, Dr. Peterson and his wife had been divorced for twenty years. The differences are mainly just exposition, but it makes for a fun contrast, and even makes the story a little more streamlined.

The House by the Cemetery was shot around Concord, Massachusetts with the interiors of the Freudstein house being shot at the Incir De Paolis Studios in Rome, Italy, where such films as 1977’s Suspiria, 1981’s The Beyond, and 1986’s Demons were partially shot. Those interested, the house still exists today and is located in Scituate, Massachusetts, operating as an art studio. US audiences were not introduced to the film nearly three years later in June of 1984, but thanks to home video the movie quickly built a cult following. Collatina, reflecting on the film, stated, “I think that nearly every Horror movie of the ’80s still remains in our memory. The House by the Cemetery still appeals to people thanks to its fascinating setting, the pastel colors of the movie, the mystery, and end… everything is still so poetic, Gothic and horrific at the same time.” A very true statement in the heart of fans, The House By the Cemetery signified the end of the Gates of Hell Trilogy, but more tragically, the end of the high point of Lucio Fulci’s career. Not that his other films do not have their fans, like 1982’s The New York Ripper or 1983’s Conquest, but none saw the success back then, or are as regarded today as 1979’s Zombie, City of the Living Dead, The Beyond, and of course, The House by the Cemetery. 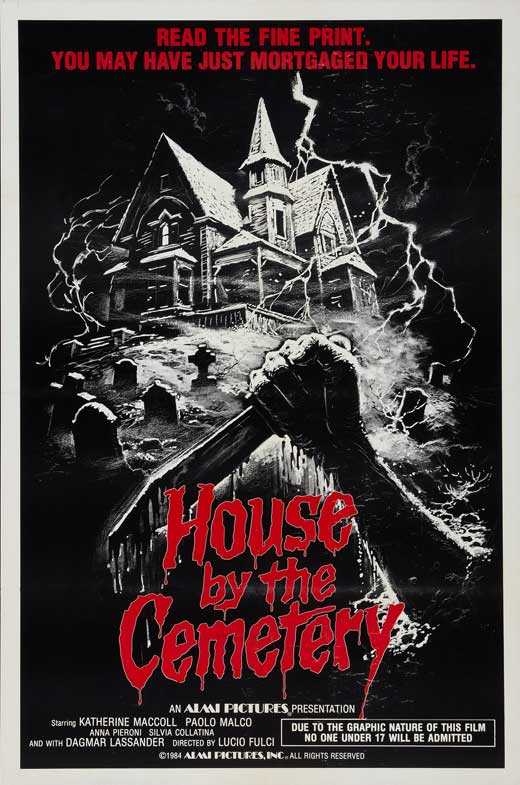