In times of mourning, one often seeks solitude in something that is unfamiliar to them. Whether it is finding religion, moving to a new place, reinventing oneself, or perhaps even joining a cult. The last one is not recommended, but then again, not all cults are bad, right? Some people seek companionship and solitude in a cult, a feeling of belonging and support they cannot find anywhere else. Several Horror films over the years have come out telling the stories of cults; some are based on true stories while others are original tales. Cult based stories are thrilling, exciting, and slightly often scarier than the average Horror film because cults are everywhere and situations like this happen all the time. Although these films are a fun, guilty pleasure to indulge in from the safety of one’s home, please refrain from drinking the Kool-aid.

Distributed by Drafthouse Films and directed by Karyn Kusama (Girlfight 2000, Jennifer’s Body 2009), The Invitation is an original Horror Cult film that fans everywhere will love. Kusama is no amateur to capturing her audience’s attention; people are still talking about her work in Jennifer’s Body, and with this Thriller, the viewer is engaged throughout the entire story. Phil Hay (R.I.P.D. 2013, Ride Along 2014), Martha Griffin (54 1998, Brooklyn’s Finest 2009), Matt Manfredi (Æon Flux 2005, Clash of the Titans 2010), and Nick Spicer (Tusk 2014, Spring 2014) produced this freaky cult story based on a screenplay written by Manfredi and Spicer. The musical score throughout the film was composed by Theodore Shapiro (Tropic Thunder 2008, Spy 2015) which gave the scenes a subtle, yet chilling setting.

This movie is the second to be financed by Gamechanger Films, which helps provide funds for women who direct Independent films – that is pretty awesome. Lege Arts also helped with funding, and XYZ films helped with production, too. Although there is a force field of awesomeness behind the people who made this film, the ones that bring light to this dark story are the actors. The movie stars Logan Marshall-Green (Devil 2010, Prometheus 2012), Emayatzy Corinealdi (Addicted 2014, Miles Ahead 2015), Michiel Huisman (World War Z 2014, The Age of Adaline 2015), Tammy Blanchard (Moneyball 2011, Into the Woods 2014), John Carroll Lynch (Shutter Island 2010, American Horror Story TV series), Michelle Krusiec (Sweet Home Alabama 2004, What Happens in Vegas 2008), Mike Doyle (P.S. I Love You 2007, Rabbit Hole 2010), Jordi Vilasuso (All My Children TV series, Circle 2015), Jay Larson (Nacho Mountain 2009, Exposed TV series), Marieh Delfino (Jeepers Creepers 2 2003, Don’t Come Knocking 2005), Lindsay Burdge (The Midnight Swim 2014, 6 Years 2015), and Karl Yune (Memoirs of Geisha 2005,  Reel Steel 2001). 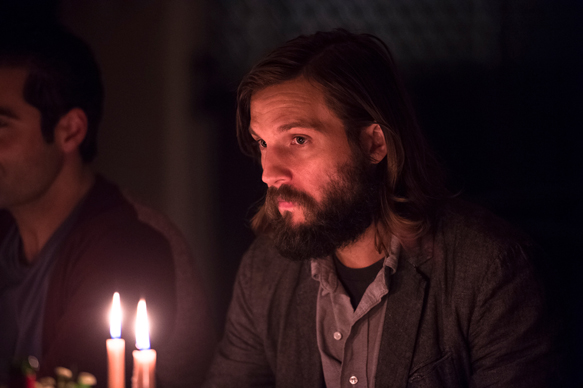 The Invitation begins with Will (Green) and his new partner, Kira (Corinealdi), as they are on their way to a dinner party, invited to by Will’s ex, Eden (Blanchard), at his former home. When they arrive, Will is greeted by multiple old friends, including Gina (Krusiec), Tommy (Doyle), Miguel (Vilasuso), Ben (Larson), and Claire (Delfino), as well as a few new faces, including Pruitt (Lynch) and Sadie (Burdge). Although happy to be in the presence of his friends, Will is a little disturbed by the happiness of his previous lover Eden and her new partner David (Huisman). It is almost as if she has forgotten the tragic event that happened not so long ago, while he still carries the sorrow and burden.

While waiting on their other friend, Choi (Yune), to arrive, they gather around the living room with drinks, discussing their lives and indulging in secrets. From the moment Will stepped in the door, he had an unsettling feeling that something was not right, even though nothing out of the ordinary seemed to be happening… well, beyond the claustrophobic feeling of no cell phone service, permanently locked doors, the tragic memories that happened in this house, and the eerie demeanor of the hosts. When Eden and David bring up what they have been doing with their lives, who their new guests are, and why they are so exceedingly happy… everyone becomes a little uncomfortable. 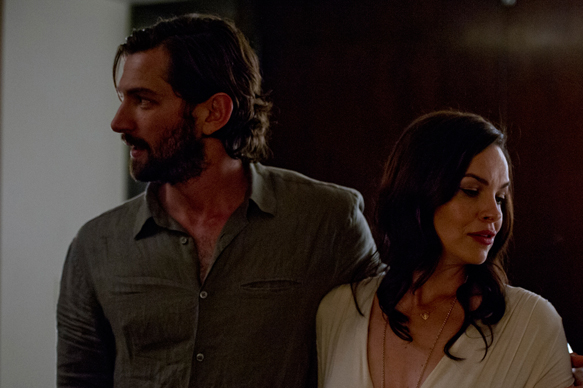 They come to discover that Eden had found a group of people – a cult – that helped her through her problems. They stopped her suffering and made her see the positive things in front of her by embracing a new way of life and forgetting the old. This upset Will even more, making him question her sanity and doubt the reason as to why they were all gathered there. As the night continues, his friends try to calm him down, saying he is just paranoid, but the truth shortly comes out after dinner and the intentions of their dinner hosts leave them in an unusually deadly situation.

The Invitation had its world premiere at the SXSW film festival on March 13, 2015, and was released limitedly through Video on Demand and in select theaters on April 8, 2016. This film is surprisingly refreshing, well-crafted, and has a brilliant cast. It is receiving love from many critics, despite a few who say it is a slow burner that does not deliver. Yes, it is a slow burner type of film, but it builds up the anticipation on purpose. It makes the audience wonder what is going to happen, slowly building up the anxiousness of when and how events will unfold, giving the viewer an eerie, intense feeling and knowing the exact right moment to deliver its climactic scene so that once it gets there, the audience goes crazy! This movie is one that everyone should watch, even more so if they favor cult-like scenarios. CrypticRock gives The Invitation 5 out of 5 stars. 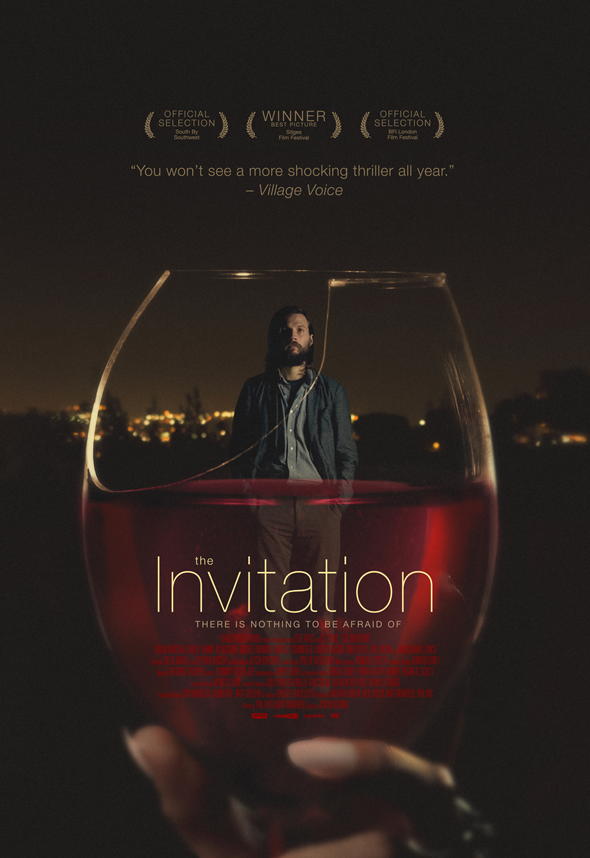