The Legacy Of Amorphis’ Elegy – 20 Years Later And Still Shining 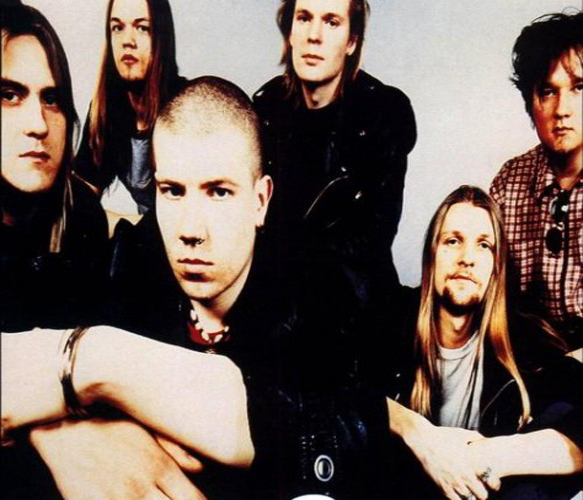 Looking back on the past achievements of favorite bands provides enjoyment and stirs nostalgia, but perhaps the most valuable thing it does is to give fans perspective. In Finland, good bands are almost as common as the clear, bracing lakes which dot its forested landscape. To climb atop such a heap of musicians is no easy task. For Helsinki’s effervescent bards Amorphis, the ascent was made in the usual fits and starts which beset all musical collectives. When Tales From The Thousand Lakes surfaced in 1994, a young band known for its extremity suddenly bloomed into a myriad of sonic dimensions, laying the groundwork for Folk-infused Melodic Death Metal and launching a career that continues to rise to this day.

Successful follow-ups to such landmark recordings, however, are not always guaranteed. Sensing the musical shift developing within them, Amorphis decided to hire some outside help in the form of vocalist Pasi Koskinen. keyboardist Kasper Martenson departed and was replaced by Kim Rantala, and founding Drummer Jan Rechberger left the fold to be replaced by Pekka Kasari. With founding guitarist Tomi Koivusaari and Esa Holopainen invigorated by their newfound success, the band wrote and prepared their third studio album, which they would entitle Elegy.

Laid down and recorded by Tomas Skogsberg in Sunlight Studios and Mikko Karmila at Finnvox studios, the album appeared once again on Relapse Records, hitting the shelves on the 14th of May, 1996. The band fearlessly allowed Koskinen to inject some never before seen clean vocals into the framework of their songs. Off-setting Koskinen’s robust clean register, Koivusaari still offered his gravelly rasp across many of the songs, albeit less frequently than on recordings past. Keeping the lyrical focus on Finnish history, the national epic the Kanteletar was delved for its honest, heartfelt legends of a people whose own language and customs vary so greatly from both the Slavs to the east and the Norsemen to the west of them.

Amorphis managed to take these ancient tales and turn them into emotive, epic, and wonderfully wrought songs, which not only captivated their fan base, but catapulted them into the consciousness of fans across the globe. To this day, it is supremely difficult to find a more touching rendition of the heart of a people than the conflation of words and music found on Elegy.

The vocals of Pasi Koskinen are a major reason why this album remains so damn touching, timeless despite the two decades which have elapsed since its birth. The opening song sets the mood as it dances in, quite literally insinuating itself into being like the advent of autumn in a greenwood glen. Koivusaari’s welcome growl, the more rich for the better production, gives way to the second verse belted out so strongly by Koskinen. 1996 was a strange time for Metal; Grunge was at the height of its powers, and though Amorphis’ new vocalist came from an unmistakably underground slew of extreme bands, there was a touch of Layne Staley in his forceful wail – despair and power melding together to give these sad, sad tales the desperate dose of melancholy that put them over the top.

This opener, with its lamentation of existence and wish to die as a three-night old, “cheerfully” gives way to “Against Widows,” the song for which an official video was made. Evidently, long ago in Finland, one of the worst things to have happen would be to lose one’s husband. As the song revs up, it is clear that keyboards were playing a larger role in the Amorphis repertoire, underpinning a chug-chug of guitars that did not quit. Again, Koivusaari belts the verse and Koskinen croons the chorus, with some fantastic breakdowns and infectious melody lines. Assuredly, this one would remain in their live set long after Olli-Pekka Laine (bass guitar), its creator, would depart from the band.

As stated earlier, melancholy was the prevailing feeling on Elegy, a feeling conveyed so artfully on “The Orphan.” And not just sadness, but psychedelia too, manifested by the warbling keys of Rantala. After talk of dying in the cradle, the unsuitability of widows for company, Amorphis tackles what it was like to be a lone child in a village in the frozen winter of long ago. The Finnish people sure did not sugarcoat the medieval existence one iota. This song builds like the most classic of Heavy Metal ballads, raising the tension until it breaks at around 3:20 into a flourish of repetitive notes. They climb and dance until the keys resonate with the melody in some of the most lustrous instrumentation this side of Lapland.

Elegy has its share of uplifting tunes, be it the classical flourishes of “On Rich And Poor,” or the folky, danceable “Cares.” On the former, Koskinen lends his lungs to choruses and bridges that cannot be described as anything other than timeless. The melodies flutter and spiral like excited fireflies. On the latter, they call to mind brief sub-Arctic nights where the pines scrape cobalt skies beneath a moon the hue of gold. That is, until they call to mind a modern dance hall with a cool, but inexplicable Disco breakdown about halfway through.

Enigmatic breakdowns aside, the cultural nostalgia returns in spades on the beloved “My Kantele.” Oh the opening guitar on this song – will it, can it, ever be topped? Twenty years later, neither it nor any other section of the album sounds out of place. Perhaps the best keyboard soloing this side of Prog, the song also features one of the most singable choruses in existence. Hypnotic, looping bass lines and flowery keyboards outline the hard rocking “Song of the Troubled One,” giving the impression that the creation of this album was as seamless as birdsong in spring. Ironic, then, that Elegy would be the only album this exact incarnation of Amorphis would ever make together.

The partly acoustic “Weeper On The Shore” injected some more Classic Rock psychedelia into the affair, with the Death Metal crashing right into Jethro Tull balladry for unique and magical results. Amorphis’ reliance on the Koskinen/Koivusaari sing and growl vocal approach proves more effective than any sing it, scream it, Emo/Nu-Metal band could ever hope to impart. The transition at 2:30 shows that Amorphis was operating in a stratosphere all their own.

The glorious pinnacle of Elegy, if it lives anywhere, dwells in none other than its title track. The writing credit for this monster goes to Kim Rantala, a man, who looking back now, spent barely any time in the band. Knowing Amorphis, their songwriting is a group effort, but it still bears mentioning. From the piano intro, it is clear that Elegy is their “November Rain,” their “Fade To Black,” and up to this point in their career, arguably the most heart-wrenching song Amorphis ever produced. Grieving for a lost love transcends the Kanteletar; it transcends time, language, culture, and infuses very age of mankind. We can all relate.

As if the heart-breaking harmonics in Koskinen’s voice are not enough, the guitars and keys strum the very chords of longing, even as the lyrics illustrate, with poignancy and honesty, the sorrow of going through the prosaic chores of everyday bereft of the one you love. Koivusaari growls the words in an echoing, faraway refrain, blackening the song’s dismal skies, before the piano returns. With lovely strains of guitar and distortion, a melody churns and weeps. The proggy jamming run which ensues is at last lifted up on the wings of a keyboard solo that had to have come from the depths of Rantala’s very soul. The song descends from this summit in a most satisfying, melodic fade-out. One can picture the aggrieved man bent over the unmarked grave of his peasant love, clutching wildflowers as the cold winds rise. Stunning music in 2016 as it was in 1996, the album could have been enough to define their career.

The clarity of hindsight reveals how amazing the reinvention of Amorphis truly was. Elegy gave them new life in 1996, and the people who contributed to it and departed soon after never even came close to its majesty. Even Koskinen, who stuck around for another three albums, never even touched this recording. As with so many of the old guard, the ’90s saw a ton of experimentation. Amorphis burned that out and again got new life in 2004 with Tomi Joutsen, who unlike his predecessor on the microphone, has only seen the band gain success, and not stagnate.

Amorphis has had a steady lineup since he joined, the viability of their staggeringly strong albums virtually assured. In 1996, they were still gelling from the tectonic upheavals of youth, creatively searching, like children sampling every kind of candy in a favorite shop. Elegy was a moment in time for them, but its shiny cover; blue, that tinge of sunset pink, and grey with a slick, lower-case logo so simplified from their old Death Metal one, held within it a magic that has not faded twenty years later. 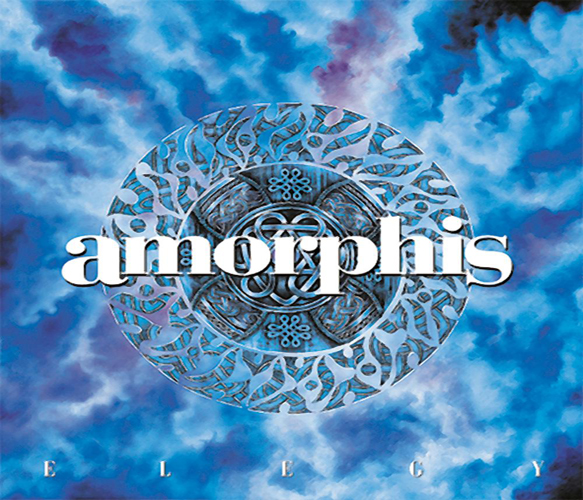