For over fifty years, Los Angeles, California’s The Monkees have been a part of Americana history. The Rock-n-Roll band has been a part of Pop culture and loved by fans worldwide, not just for their unique personas, but as talented musicians. However, The Monkees union did not come about in the traditional sense of a group forming. As most know, in 1965, Director Bob Rafelson was looking to cast an American Television Series called in The Monkees. The four men who would make up this acting and singing group would be Michael Nesmith on guitar, Peter Tork on bass, Micky Dolenz on drums, and Davy Jones as vocalist. Dolenz has been quoted as saying, “The Monkees was a TV show about an imaginary band … that wanted to be the Beatles, [but] that was never successful.” Although, all four men were gifted with the ability to play multiple instruments and sing while filming, the group would have little studio time to record or write music.

By 1968, the series was cancelled, however The Monkees would continue to record until 1971. As fans grew to love the band, it fueled the fire for them to continue on creating more albums and touring on and off during the years, even after the tragic passing of Lead Singer Davy Jones in 2012. With that in mind, The Monkees have gone on to a lengthy career, recording many albums, with 1966’s The Monkees and 1976’s More of the Monkees both attaining five times platinum status. With massive Rock hits such “I’m a Believer,” “Last Train to Clarksville,” “Daydream Believer,” and “Pleasant Valley Sunday,” they have sold over seventy-five-million records internationally, and, in 1967, at the height of their career, the band outsold both The Rolling Stones and The Beatles combined. Not bad for a band of musicians and actors who were brought together for a television series who continued down the path of their love of music while being embraced by Pop culture and fans world wide.

Still performing live post-passing of Davy Jones, it has been twenty years since The Monkees have released a studio record. It seems only fitting that in honor of their fifth anniversary in the music industry, they would celebrate by releasing new music, and that comes in the form of their twelfth studio album, Good Times! Released on May 27, 2016 via Rhino Records, the album was produced by Adam Schlesinger of Fountains of Wayne with bonus tracks produced by Andrew Sandoval. Like many of early The Monkees work, the album has songs written solely for the band by some of the most talented songwriters.

The album opens with “Good Times,” a track from a late ’60s demo. Written by Harry Nilsson, it featuring Dolenz and Nilsson on lead vocals, complementing each other beautifully as they harmonize. Upbeat and fun, it is brought together by a steady piano, guitar, bass, and drum section that can not help but bring to mind being at a beach luau. Then there is “You Bring the Summer,” truly a happy go lucky song that will transport true Monkees fans back to their heyday. With Dolenz on vocals, Nesmith on guitar and backing vocals, and Tork on organ and backing vocals, the songs allows the listener to gain some great harmonizing while embracing bass, drums, and even keyboard.

The band’s first single off the album, “She Makes Me Laugh,” was written by Weezer’s Rivers Cuomo. It begins as a ballad before becoming a more upbeat Rock song with Dolenz sounding as strong as ever while Tork brings some banjo into the mix, along side Nesmith on guitar. A very effective track, Cuomo seems to have captured the famous Monkees sound and brought a new age feel to it. Thereafter is two up tempo Rock cuts, “Our Own World” and “Gotta Give It Time,” where Dolenz provides lead vocals and Nesmith backing vocals. Meanwhile, Tork brings his backing vocals and keyboard skills in on “Our Own World” while the two tracks allow for some great guitar soloing, steady bass, drums, keyboard and/or organ.

Another compelling contribution, Ben Gibbard of Death Cab For Cutie penned the beautiful, slightly upbeat ballad “Me and Magdalena.” This time, Nesmith and Dolenz harmonize as lead vocalist, adding a richness to the song. With only piano, strumming acoustic guitar, along with steady drum playing, the song is breathtaking and sure to be a fan-favorite. Following is the Pop Rock track “Whatever’s Right” featuring more strumming guitar, steady bass, and drums, all while Dolenz rocks on lead vocals. Up tempo, it provides some great harmonizing and backing vocals from Nesmith, Bobby Hart, and special guest, Micky’s sister, Coco Dolenz.

Neil Diamond’s “Love is Love” is truly a special moment on Good Times! as Davy Jones is featured on lead. Tork and Dolenz provide backing vocals as a strong organ, guitar, and tambourine presence is mixed in with a steady bass and drum for a memorable listen. Showcasing the talents of Tork, “Little Girl” is written by him as he is the only member featured singing. Simple in nature, but very alluring to the ear, it has a Country Blues sound to it that does not seem to fit in with the traditional The Monkees sound, but that does not mean it is not one of high quality.

One of the most modern sounding tracks comes with the Noel Gallagher (Oasis) and Paul Weller (The Jam) co-written “Birth of an Accidental Hipster.” With echoes resonating, it also has a new age guitar solo while Nesmith and Dolenz provide lead and Coco Dolenz sings back-up, taking The Monkees into a more present day style. Carol King and Gerry Goffin’s “Wasn’t Born to Follow” is another up tempo piece with Tork on lead guitar and banjo. Here, Tork’s vocals are extremely sharp and strong, and those that listen closely can truly hear King’s signature style projected.

Featuring only Nesmith on vocals and Adam Schlesinger on bass, piano, guitar and chamberlain, “I Know What I Know” is a gorgeous ballad. Written by Nesmith himself, the song shows vulnerable and melancholy vocals that bring feeling as Sclesinger provides a wonderful solo on the chamberlain that plays over the piano and guitar. This is before the finale of “I Was There (And I’m Told I Had A Good Time),” embraces a Blues Rock feel with clapping and strumming guitars. Written by Dolenz and Schlesinger, Dolenz provides vocals that have an reverb attached for a nice texture while his drumming provides a steady beat.

The collection of songs on Good Times! has allowed The Monkees to be able to open up their vault of unfinished songs and complete them, whether by themselves or with other artists. The truth of the matter is, The Monkees’ sound will always remain unique. Fans of all ages have loved the band from day one, some are re-discovering them, and some are brand new to them. With that being said, their is still a large fanbase that embrace one of America’s original Rock bands. CrypticRock gives Good Times! 4 out of 5 stars. 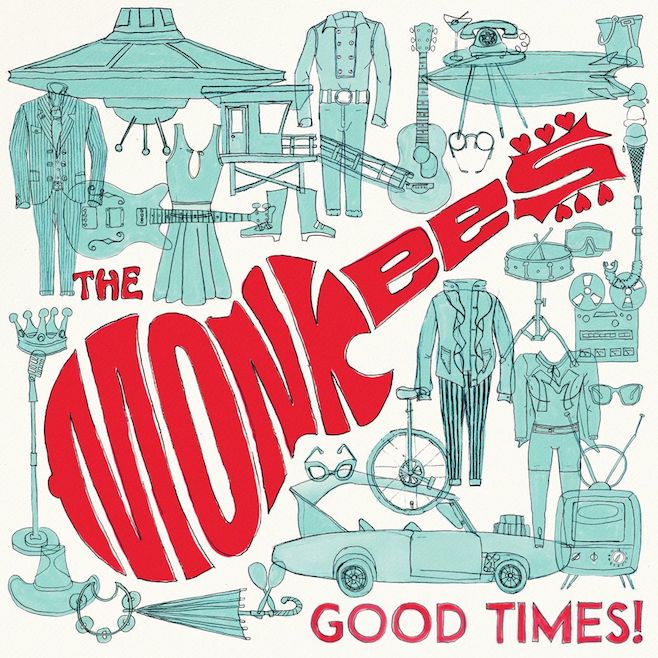