On July 30th, 1984 the world was introduced to one of the most imaginative and enchanting stories ever brought to the big screen. Based on the German novel Die Unendliche Geschichte, written by Michael Ende, The Neverending Story has spanned decades, delighting both children and adults all over the world. Brought to life by director Wolfgang Petersen, who took a chance on the film as his first English language effort, The NeverEnding Story did amazingly well, grossing over 100 million dollars worldwide.  Featuring a colorful cast of characters, unforgettable soundtrack music – which included the theme sang by Limahi of new wave band  Kajagoogoo – the film has branded it’s imagery on audiences and is now celebrating its 30th anniversary.

Barret Oliver as Bastian Balthazar Bux in The NeverEnding Story

The NeverEnding Story begins with a troubled young boy named Bastian (Barret Oliver) enduring some of the same issues so many young children can relate to; losing a family member, dealing with bullies, and suppressed emotions. Bastian’s love for reading and his vibrant imagination bring him to a local bookstore where he stumbles upon a quirky book entitled The Neverending Story.  The tale within introduces him to the extraordinary and enchanted land of Fantasia. Ruled by a child-like empress, Fantasia is beginning to collapse because of the force known as “the Nothing.” The princess calls on Atreyu (Noah Hathaway), the strongest warrior in the land, to find a human boy to help save their home. To do that, Atreyu must travel outside of Fantasia. With each page he turns, Bastian realizes that Atreyu and the princess are seeking him! Throughout their journey, Bastian and Ateyu interact with characters that will make viewers laugh, wince and cry. Wolfgang Petersen found a way to evoke emotion from all ends of the spectrum in this timeless childhood classic. 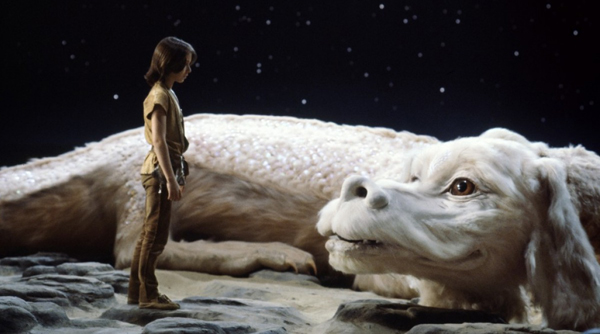 Noah Hathaway as Atreyu in The NeverEnding story

As Bastian is guided into Fantasia, Petersen takes audiences on an unforgettable journey through the child’s imagination. Although the film grossed over $100 million worldwide it received mixed reviews from critics. Roger Ebert stated that “an entire new world has been created” because of the film and its visual effects. Contradicting Ebert’s sentiments, original author Michael Ende said he was unimpressed with Petersen’s choice to cut characters and shorten the film and fumed that even the title of the story was underwhelmed by the director’s choice to expose only the first half of Ende’s book. Petersen noted that in order to appeal to a broader, more international audience he decided to only recreate part of the story. Nonetheless, by narrowing the character list and plot, Petersen’s version of The NeverEnding Story keeps audiences entranced from start to finish. 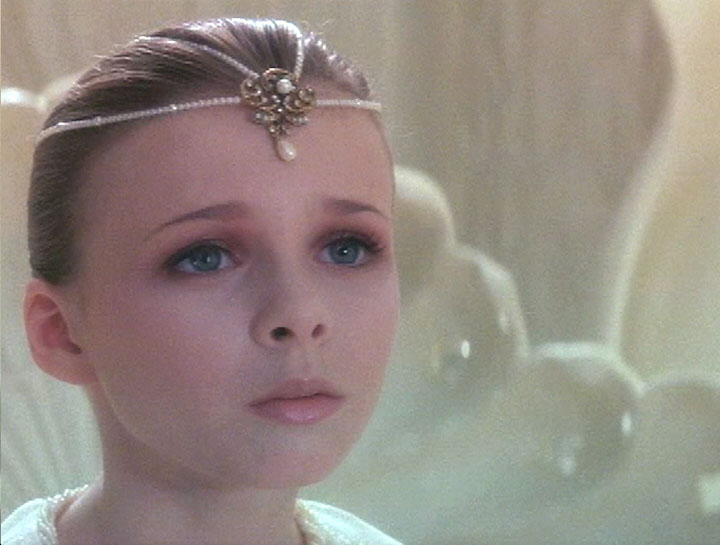 Tami Stronach as The Childlike Empress in The NeverEnding Story

The 1980’s were filled with dark fantasies; The Dark Crystal (1982), Return to Oz (1985), and Labyrinth (1986) all similarly focus on exquisitely imaginative lands and wide-eyed children venturing into the unknown. Likewise, The NeverEnding Story brought to life the same endearing qualities, unleashing childrens’ desires for adventure and adults’ nostalgia towards the simpler life of fantasy and fairy tales. Contrary to recent cinema, Wolfgang Petersen relied on primitive “blue screen” technology to bring his characters to life. Hundreds of puppeteers and mimes helped create these lovable roles. Matching up the voices to the puppets was said to be one of the most difficult tasks during filming. And it seems that the slight imperfections in timing are some of the most endearing flaws. Bringing viewers back to a time before technology replaced make-believe, Petersen’s film created a magical, emotional connection to each of the characters. Every unique persona brought to life in the film was crafted using hand-made puppets, sometimes operated by a crew of 25 people! Without the help of new age CGI technology, the puppets gave the actors an actual cohort to interact with during filming. Rather than imagining their costars, the child actors in the film actually rode on giant “flying” dragons and mingled with whimsical creatures. In the current age of advanced cinematic technology, all children should have the experience of watching this film, allowing them to unleash a different part of their imagination. 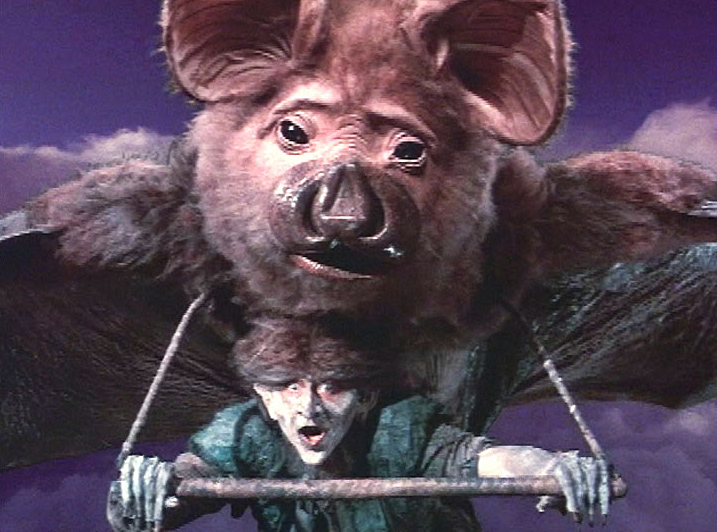 1980’s fantasies led to a different type of family film; one that abandons the solely happy-go-lucky story and allows a somewhat darker side of childrens’ imaginations to be exposed. Petersen noted that he wanted neither a Disney style movie nor did he want it to be too dark. His goal was to appeal to a wide range of families all across the world.  Judging by the lasting impact of the film it is evident this styling worked dramatically well.  In fact, the film’s influence on pop culture spans much further than many may realize, inspiring the name of metal band Atreyu as well as countless other bands which have made reference to the film in their songs.

Whether one grew up watching the film or were introduced twenty or even thirty years after its production, The NeverEnding Story has aged gracefully and will continue to delight audiences for years to come. Allow yourself to get lost in a world of wonder just one more time. 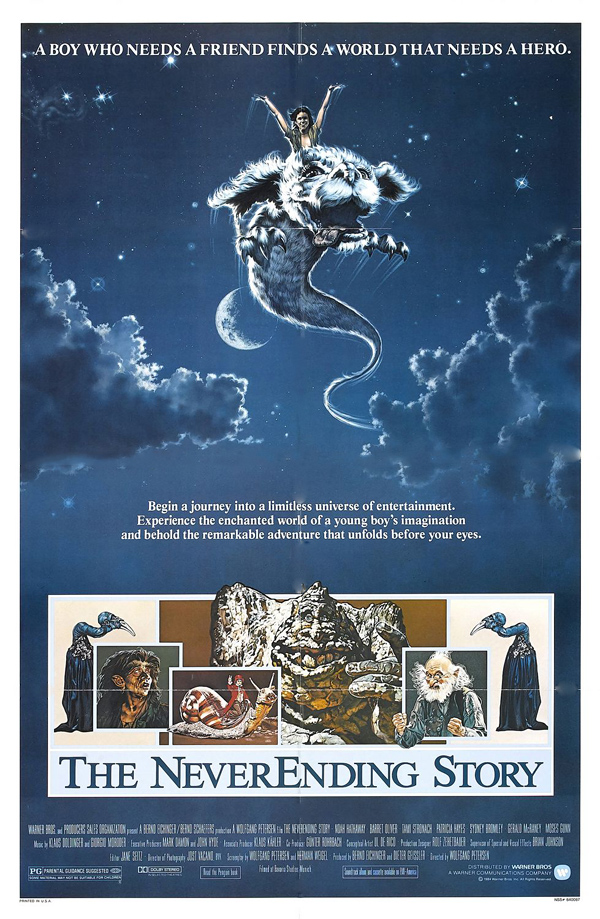 Reflect on the impact The NeverEnding Story had on a generation of musicians in thoughts below:

“I feel extremely fortunate that The NeverEnding Story entered my life 30 years ago. As a young performer/singer of just 25 years old, I had no idea it would impact on my life in such a positive way and for such a long time. People all over the world often tell me how they hold this song with such affection. How cool to have been part of something which still makes people feel great for 3 minutes and 40 seconds every time they hear it (laughs). That’s exactly why I entered the music business.  I still receive regular requests to perform the song globally (I was recently invited to Moscow) and it’s always a joy to watch those expressions of joy coming back at me from audiences. I know they’re remembering where they were when the song first came out – their first holiday, first kiss, first house or first job (smiles).  Let’s hope I’ll be here to give you a quote for the 40th, 50th, 60th & 70th anniversary of the song/movie release.”
-Limahl

“The NeverEnding Story is currently the only DVD I own. It’s a great movie on many levels. It’s entertaining, quoatble, and packed with philosophical life lessons such as ” You could do with a dose of juicy vitamins too,” “It doesn’t matter, nothing matters,” and “Moonchild!!!!!!” – CaseyDC,  9ELECTRIC bassist

“Growing up I remember sitting on the living room floor with my big sister watching the movie and just being completely mind blown. Special effects at that time completely surpassed all other movies I had seen. Every little boy wanted to be Bastian and go on the adventures he did. Movie definitely made an impact on my childhood and keeps the dream of true imagination alive” – Bryan “Boze” Bozeman, Almost Kings vocalist

“Being thrown into a world that is ripped from the pages of a storybook is very familiar to me…. It’s movies like “the neverending story” that gave me the inspiration to create things that were larger than life… To explore every part of my imagination…. and create, with music and art,  my own universe inside today’s world.” -September of September Mourning

“The NeverEnding Story was one of my favorite childhood movies. Not to mention all the crazy dreams it gave me about flying and giant dogs. To this day I can probably still blame that movie to some of the weird dreams my mind conjures up.” – Ryan Yunker , Almost Kings guitarist

“That movie is a big reason I started listening to metalcore in the first place. As a kid, I was a huge fan of The NeverEnding Story movies. So when I heard there was a band named Atreyu, I had to check them out. I did not listen to much music with screaming at the time, and they floored me.” – Ryan Grandmaison, Scare Don’t Fear bassist

“Hard to believe that film is turning 30 this year. Nevertheless, it will always be a true classic in my eyes.” – Alex Vincent, Romantic Rebel guitarist

“The NeverEnding Story was a movie I watched religiously as a kid. In fact I can imagine that the wackiness of my mind may have come from it! I still to this day find myself singing that song in my day to day activities and picture myself flying over cities on a massive flying dog. Great movie! “ – Ryan Hayes, Righteous Vendetta vocalist

“I just remember how magically that movie was.  I remember watching that and Labyrinth (1986) around the same time as a kid.  I just loved Falcor, I think his character was amazing.  I just love the journey Atreyu going on.  There is just so much hope and bizarre qualities to that film which are magically when you are a kid.  To think that a book can take you to these other worlds, that is the best part, and I love to think about that.  I think it is really good for kids to watch these days.  I think every kid should watch the movie and think about a book transporting to a place like The NeverEnding Story.” – Kristen May, Flyleaf vocalist 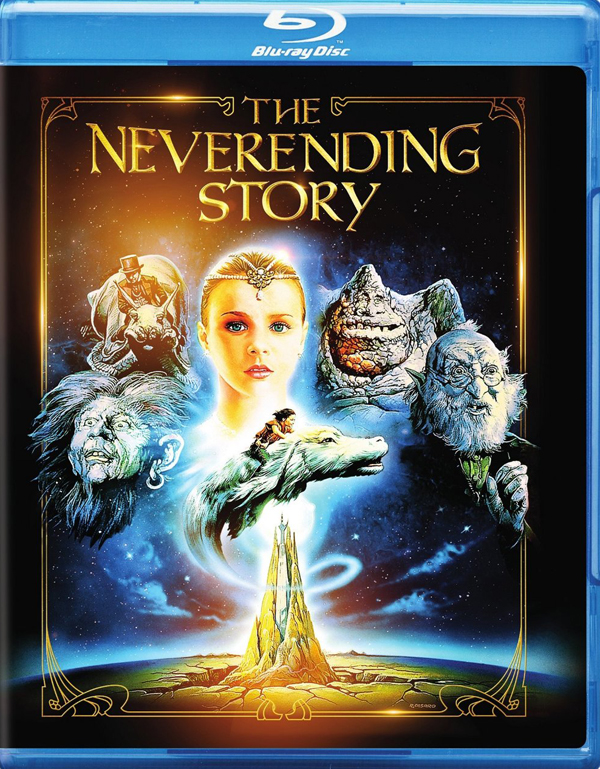 The 30th anniversary Blu-ray edition of The NeverEnding Story is out October 7th.

Erasure – Day-Glo (Based on a True Story) (Album Review) Annette (Movie Review)
Like the in-depth, diverse coverage of Cryptic Rock? Help us in support to keep the magazine going strong for years to come with a small donation.