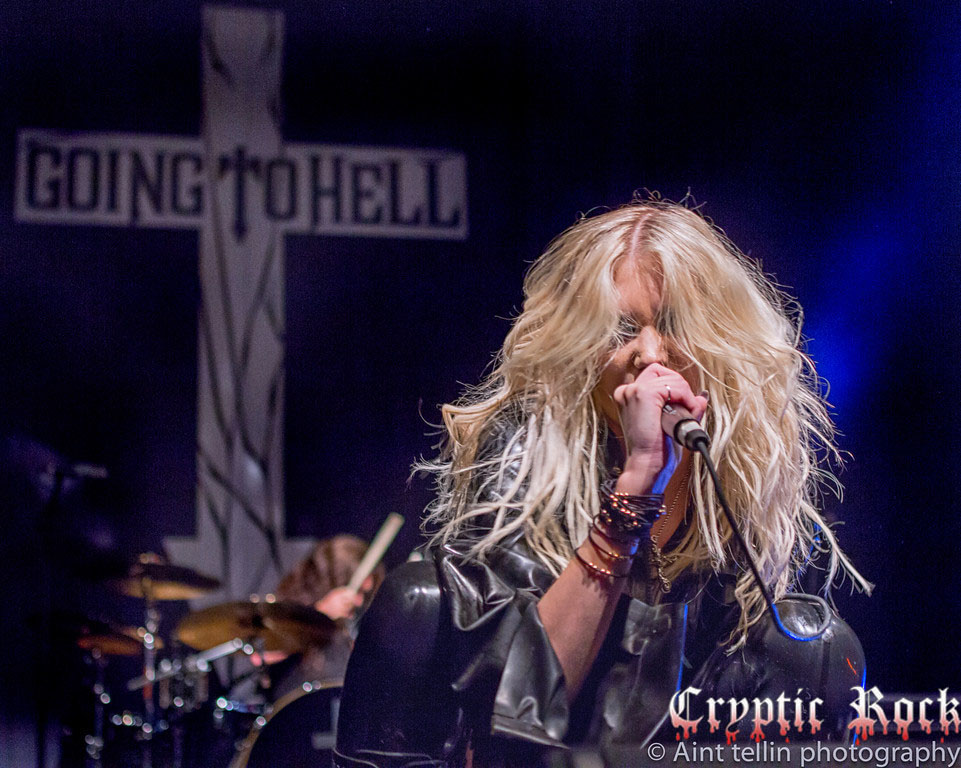 Rock n roll has been rather nondescript for nearly a decade. With an extensive list of sound a like bands, many seem to lack the grittiness and energy rock n roll once possessed. There are a bunch of up and coming bands looking to recapture that rock n roll feeling once again.  On Friday September 20th two of the bands part of the new movement, The Pretty Reckless and Born Cages, came through to rock The Paramount in Huntington NY.

From New York City alternative rockers Born Cages started the night off with a bang. The band have been crafting music since 2011 blending pop, rock, and synthesizer influences into a fun ball of pop rock energy. Their energetic fun sound landed them a spot on the Now That’s What I Call Music! 45 with the song “Don’t Look Back”. With fast rising stock the band signed a deal with Razor & Tie records earlier this year leading to the released of The Sidelines EP . Led by Vlad Holiday (vocals), Amanda Carl (keyboards/vocals), Steve Kellner (bass/vocals), and Dave Tantao (drums) Born Cages prove to be a tight cohesive unit of young musicians. Strong bass lines, killer guitar solos,  engaging synthesizers, and pop sense makes these guys a fun listen to say the least. With powerful catchy tunes like “Caiti” and “Metaphor” Born Cages surely grabbed the attention of many new fans before their set was done.

Also originating from New York City The Pretty Reckless have gradually risen in popularity of the past 3 years. Last making an appearance at The Paramount opening for Marilyn Manson, this time having the limelight all for themselves. The headlining tour entitled Going To Hell will embark on a 40 show trek and The Paramount was the first stop on the journey. Lead by charismatic actress turned rock star, Taylor Momsen, The Pretty Reckless were nominated for The Best Newcomer Award by Virgin Media (2010) and song of the year “Kill Me” by Revolver (2012).  Momsen is best known for her portrayal of the character Jenny Humphrey on the CW television series Gossip Girl and Cindy Lou Who in Dr. Seuss’ How the Grinch Stole Christmas (2000). What many must realize is despite her success in acting it’s clear Momsen wanted to explore rock n roll and not just as a goof but take a serious stab at it.  She has all the aspects of a powerful front woman in a rock n roll band.  Entertaining, attractive, and a straight up sexy appearance is only part of this band’s appeal. They possess an energy, grittiness, and aspect of fun like rock n roll of old.

Opening the set with the track “Kill Me” started things off with a shot of adrenaline. Keeping things interesting the band followed with the track “Hit Me Like A Man”.  Not letting down the excitement the band went into one of their most powerful tracks “Make Me Wanna Die”. Raw rock n roll energy, powerful vocal performance, and fun lyrics make this song a winner. Next up was “Zombie”, a groovy track that sounds great for a live performance.  Keeping the momentum going next up was “My Medicine”, another fun rock n roll track that had fans dancing and moving about the floor. The set took off from this point with a series of killer tracks from the band’s debut album Light Me Up (2010) including “Miss Nothing”, “Since Your Gone”, “Just Tonight”, and “Goin’ Down”. Mixing in new tracks released over the last year and yet to be released from the upcoming record one thing is clear, The Pretty Reckless have matured in the past 3 years in their sound, style, and approach to the music. They are tighter as a band and their song writing has progressed with the newer material  Hearing these tracks in a live setting only adds to the anticipation of the band’s sophomore effort Going To Hell due out in 2014.

A headlining tour is a big step for a band. Sometimes a band can not make the jump from an opening act to a full set of songs, keeping an audience’s attention, and keeping their own energy levels high.  The Pretty Reckless opened the Going To Hell tour up quite impressively with a solid balanced set of energetic rock tunes which keep all in attendance interested. The Pretty Reckless are clearly ready to take the next step in rock stardom and prime for a successful tour ahead.