The forest holds untold wonders and deep, dark secrets, wander into its depths and you might never return! In The Ritual, the Swedish forest is hiding something truly horrifying within its borders, and you are invited to journey inside as of Friday, February 9, 2018. Originally released to UK theaters in fall 2017, The Ritual has finally made its way to the U.S. thanks to Netflix along with Entertainment One and The Imaginarium. 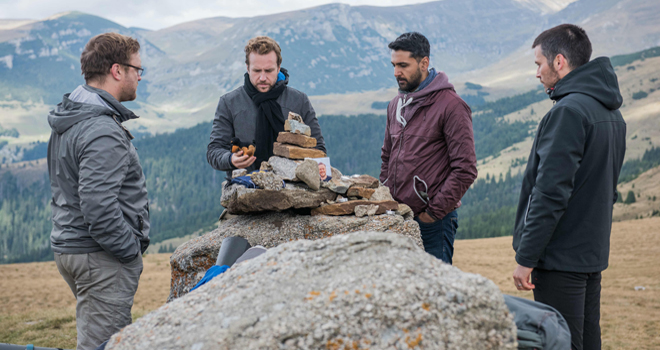 We begin with a group of five college pals, attempting to plan their annual holiday outing. Suggestions are tossed around – from Amsterdam to Belgium, Ibiza to Sweden – as it slowly becomes obvious that, with time and maturity (for some), these lads are growing apart and their friendships are tenuous, at best.

They are an eclectic batch of thirtysomethings, composed of the seemingly de facto leaders of the group Hutch (Robert James-Collier: Coronation Street series, Downton Abbey series) and Luke (Rafe Spall: Prometheus 2012, The Big Short 2015); go with the flow Robert (Paul Reid: Boy Eats Girl 2005, Vikings series); hyperbolist Dom (Sam Troughton: AVP: Alien vs. Predator 2004, Robin Hood series); and the seemingly introspective, youngest of the group, Phil (Arsher Ali: The Missing series, Line of Duty series). When tragedy strikes that evening in a liquor store robbery gone horribly wrong, the loss of one of their own will haunt the group immeasurably.

Six months later, on the King’s Trail (Kungsleden) in Swedish Lapland near the border of Norway – a kind of Appalachian Trail with “more history than hillbillies” – four of the men will meet for a hiking trip in honor of their fallen friend’s dear memory.  As they begin their adventure, they crest a beautiful mountain peak and immediately create a makeshift cairn in their friend’s honor while drinking a toast.

Shortly thereafter, their travels begin to take a turn for the worse. Firstly, while uttering such loving sentiments as “Sweden can lick my taint,” Dom trips and injures his knee. The others highly suspect he’s just being a prima donna (or Prima Dom-a, if you will), he insists that he has torn his meniscus. Now hiking at a decreased pace and still some fourteen hours away from their end goal, a lodge in the Swedish mountains – and, of course, without cell phone reception in the remote highlands – the group are forced to make some tough decisions. 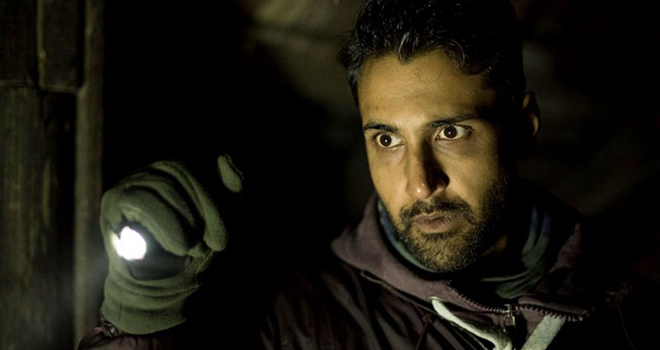 Realizing that if they abandon the trail and cut through the nearby forest they will halve their travel time, the friends trudge into the dense woods. Of course their initial order of business here is to pause for a selfie – that they lovingly entitle “four twats in a forest” – before hiking off into the thicket. Shockingly, they soon discover the carcass of a disemboweled reindeer, still dripping fresh blood. Anxious to exit the scene of this shocking crime, the foursome continue to hike onward into a vicious thunder and lightning storm. Realizing that they need to seek shelter and pronto, the group magically discovers an abandoned, two-story wood cabin in the woods.

Complete with cobwebs galore, bizarre symbology carved into nearby trees, and something truly bizarre on the second floor, it is safe to say that this is a cabin made of the stuff of nightmares. For his part, Luke quips, “Well, this is clearly the house we get murdered in!” Not to entirely ruin the entire tale but the trauma experienced at this cabin in the woods will slowly become the least of the guys’ troubles, for what awaits in the Swedish forest is something made of Norse mythology and witchcraft, black shadows and haunting nightmares of the most inconceivable unknown. Clocking in at 94 minutes in-length, The Ritual was directed by David Bruckner (The Signal 2007, Southbound 2015) and written by Joe Barton (Freak series, Humans series), based off the 2012 novel by Adam Nevill.

The Ritual is an intriguing new offering in the Horror genre as it combines the “cabin in the woods” schtick that is so common in the Survivalist Horror subgenre, then morphs it into something far greater and more obscure; creating a truly haunting viewing experience. In order to properly analyze the film, we would have to give away too many of the delicious details that, when you are in the proverbial dark, make The Ritual the exciting success that it is; thus the less you know, the better off you are here. What you should know is that there are elements of Drama and psychology at work here, peppered into a script that also has a healthy dab of comedic wit to ease tension and create likable, believable characters. 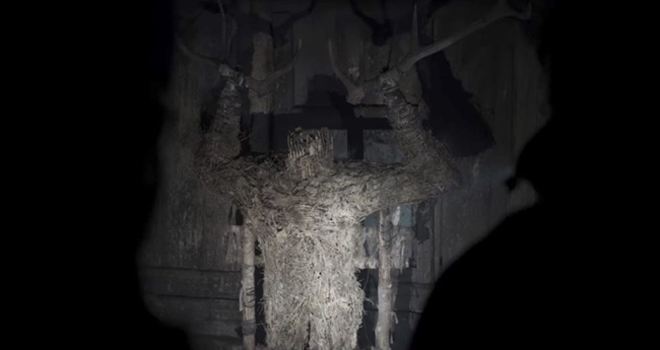 The ensemble cast do a superb job in each of their varying roles, with Spall (as Luke) receiving the most screen-time and the most well-rounded character. Struggling with survivor’s guilt, Luke enters the forest with a deep, psychological unease before ever setting foot on Swedish soil. His internal struggles are, therefore, mirrored in his physical and outward struggles.

Troughton (as Dom) depicts a character who is a bit of a prima donna, a sheltered businessman who was never meant to set foot on a hiking trail. In turn, Troughton offers up some comedic quips throughout the film, creating a casual ease to his somewhat predictable forest follies. Ali (as Phil) is entirely likeable, the every-man’s-friend-type, while James-Collier (as Hutch), embodies the dominant personality and de facto leader of the group.

Obviously, The Ritual is intended to be set in Sweden, though the film was actually shot in Romania. Amidst stunning and jaw-dropping natural beauty, the largely classical score is as majestic as the exquisite landscape; adding an additional element to an already successful production. With nearly a dozen jump-scares, The Ritual does not disappoint in its creep factor; in fact, it weaves a tale that is truly haunting in its ominously dark, truly mysterious nature. 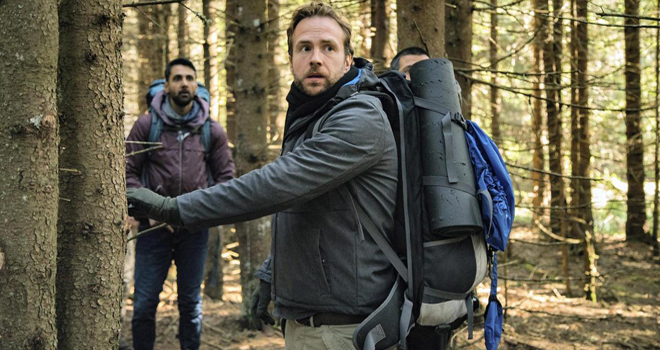 While this film is not going to do wonders for Swedish tourism, The Ritual is a fresh new spin on Horror that births something truly creepy in the middle of a gorgeously lush European forest. If you are willing to go off trail and journey into the mind of madness, do partake in this wonderfully spooky British offering that is the best thing to hit Netflix this week! Indeed, for these reasons, CrypticRock give The Ritual 4 of 5 stars. 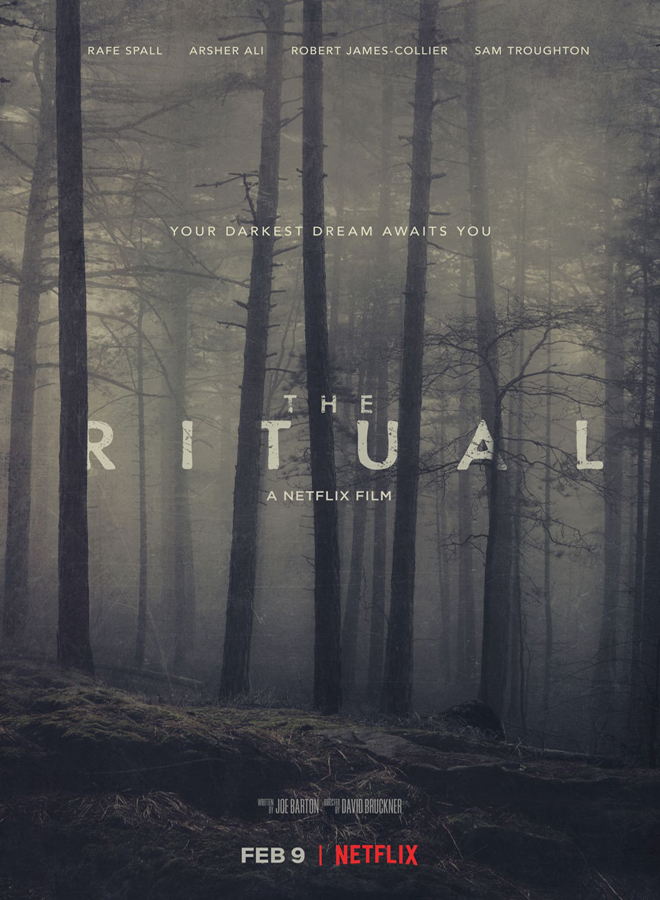