There are plenty of movies that begin with a car breaking down on a lonely road on a rainy night, but only one brings its unsuspecting protagonists to the castle of a sex-crazed alien transvestite. When The Rocky Horror Picture Show opened in select theaters forty years ago in September of 1975, it was not particularly well-attended, but after a number of midnight showings at the Waverly Theater in New York City, it obtained the status of cult classic. It was with a group of dedicated fans at the Waverly that many of the traditions associated with the film originated: attendees began dressing in character, the audience shouted one-liners at the screen, people began bringing props, and a shadow cast emerged. These audience traditions spread to theaters around the world, and due to the popularity of midnight screenings with heavy audience participation, The Rocky Horror Picture Show has become the longest-running theatrical release. Considering that it has earned over $100 million in North America alone and was created with a budget of around $1,200,000.00, it is also one of the most profitable films of all time. 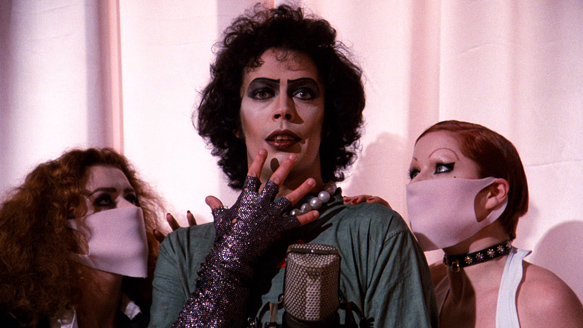 The Rocky Horror Picture Show is about a young couple, Brad Majors (Barry Bostwick: Spin City series, Spy Hard 1996) and Janet Weiss (Susan Sarandon: Bull Durham 1988, Thelma & Louise 1991), who become stranded on an isolated strip of road during a storm. Fortunately, “There’s a light over at the Frankenstein place,” an imposing castle with angular peaks jutting into the stormy sky. Oblivious to the implications suggested by the name of the castle’s owner, Brad and Janet seek shelter there. The castle’s inhabitants are welcoming — perhaps too welcoming — and Brad and Janet bear witness to the scientific, futuristic, ritualistic sexual adventures of the Transexual Transylvanians, thus experiencing sexual awakenings of their own. It is not all fun and sex games, though; there are dangers in associating with mad scientists.

Although The Rocky Horror  Picture Show has become synonymous with Tim Curry in his role as the villain, Dr. Frank-N-Furter, it was created by Richard O’Brien, who originally wrote the story and music for the stage as a comedic homage to the Horror and Sci-Fi movies he loved. The Rocky Horror Show, as it was then known, debuted in 1973 at the Royal Court Theatre in London to great success. In 1974, the Roxy Theater in Los Angeles brought the show to US audiences and its popularity grew. The next step was to make it into a film, so O’Brien partnered up with Jim Sharman to develop a screenplay (Sharman also directed). The film features many of the actors who appeared in the original London stage production including Curry, Patricia Quinn as Magenta, Nell Campbell as Columbia, and O’Brien himself as Riff Raff. Rounding out the silver screen cast are Bostwick and Sarandon in the main roles, Meat Loaf as Eddie, Peter Hinwood as Rocky, and Jonathan Adams as Dr. Everett Scott. 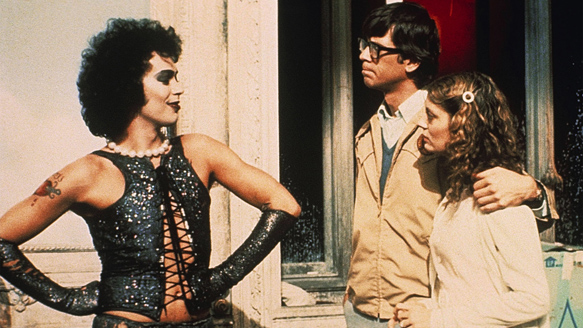 With a sinister kind of charisma that would later land him roles such as Darkness in 1986’s Legend and Pennywise the Clown in 1990’s It, Tim Curry steals the show in his first feature length film. In full drag and dramatic layers of makeup, he struts, swaggers, and sashays his way through the film, all the while maintaining his villainous edge. The unabashedly ambiguous sexuality and ringmaster persona of Curry’s Dr. Frank-N-Furter delighted crowds as if the seductive prowess the character exhibits on screen affects audiences the same way it does Brad and Janet. Perhaps the most compelling aspect of the character is Curry’s gravelled baritone, which is contrasted by his delivering lines in an accent inspired by that of British royalty. Patricia Quinn has an equally commanding presence as Magenta, the Bride-of-Frankenstein-esque maid with a throaty purr of a voice. Magenta is a fan-favorite among The Rocky Show’s cosplayers and shadow casts.

In spite of their great talent, however, the actors of The Rocky Horror Picture Show are not quite as important as its fans. The film itself is quite silly — deliberately so — but audiences transformed its portrayal of monsters and misfits engaged in a brazen celebration of sexuality into an inspiring message of tolerance and acceptance. The Rocky Horror Picture Show is perhaps the only cult film that has established an actual cult, but there is no brainwashing or savings account-draining here. The cult of The Rocky Horror requires only the occasional Saturday night donation (in the form of a ticket purchase — perhaps some popcorn too) in exchange for the friendship of an entire theater’s worth of like-minded souls. Of course there are those who loathe the film; some simply cannot abide musicals, while others prefer a more serious approach to film. Still, The Rocky Horror Picture Show is required viewing simply for the sake of cultural literacy; being exposed as a person who is unfamiliar with the “Time Warp” is far more shameful an experience than being exposed in one’s unimaginative white skivvies before a sexually experienced audience of extraterrestrial film nerds. 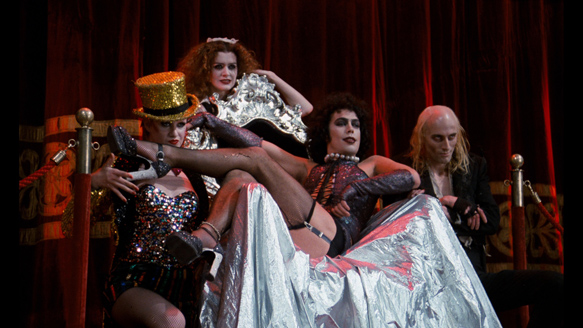 Fans and “virgins” alike should be on the lookout for anniversary screenings and celebrations, especially as Halloween approaches. This Frankenstein of a film has developed a consciousness of its own in the collective minds of its fans, and seeing it in a theater is a requisite experience for any devotee of film, especially Sci-Fi or Horror. Just do not forget to bring some rice, and toast, and a newspaper, and a costume. Or, simply come as you are and do not bring anything at all. This is an audience that will welcome you any which way. 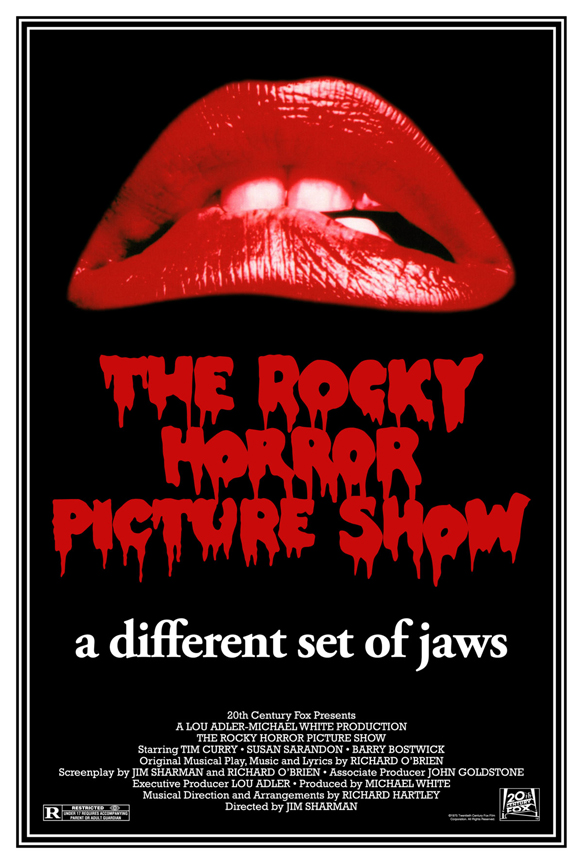