The Serpent and the Rainbow – Casting Doubts For 30 Years

February 5, 2018 The Serpent and the Rainbow – Casting Doubts For 30 Years

“In the legends of Voodoo, the Serpent is a symbol of Earth. The Rainbow is a symbol of Heaven. Between the two, all creatures must live and die. But because he has a soul, Man can be trapped in a terrible place where death is only the beginning.” These ominous specifics, with which the 1988 Wes Craven directed The Serpent and the Rainbow opens with, spark an initial curiosity in viewers that they will come to both appreciate and regret having satisfied upon the film’s conclusion. 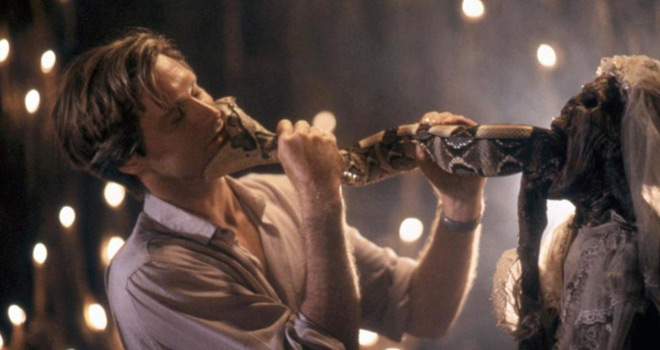 Do not recall the film? Well to help refresh the old memory, The Serpent and the Rainbow is the Fantasy/Horror/Thriller that was inspired by ethnobotanist and anthropologist Wade Davis’s 1985 International Best-Seller which shares the same title. The book recounts Davis’s journey to a politically-tense Haiti in 1982, where he spent two years immersed in a world of Haitian secret societies; exploring shamanism, voodoo, mysticism, and even investigating claims of alleged cases of zombification.

Davis ultimately sold the rights to his book to Hollywood, but initially under the impression that Australian Director Peter Weir (Master and Commander 2003, Witness 1985), would be creating the film and Mel Gibson would be starring in the lead role. As it turned out though, it would be the infamous Master of Horror Mr. Wesley Earl Craven (A Nightmare on Elm Street 1984, Scream 1996) himself who would take charge of directing the project, while Bill Pullman (Independence Day 1996, Spaceballs 1987) would assume the role as botanical explorer and researcher Dr. Dennis Alan.

Armed with a screenplay written by Richard Maxwell (18 Wheels of Justice 2001, Pensacola: Wings of Gold series) and Adam Rodman (Vietnam War Stories series, Fame 1984), the innovative, genre-defining writer/director that had previously introduced the world to the 1972 Horror classic, and his first feature length film, Last House on the Left, was more than up to the challenge of exposing the world to the underground culture commonly cloaked in confidentiality and concealment. Voodoo is a religion that is still greatly feared to this day, by both those whom have very little understanding of what it really is and how it actually works, as well as those who consider themselves believers and practitioners of it. 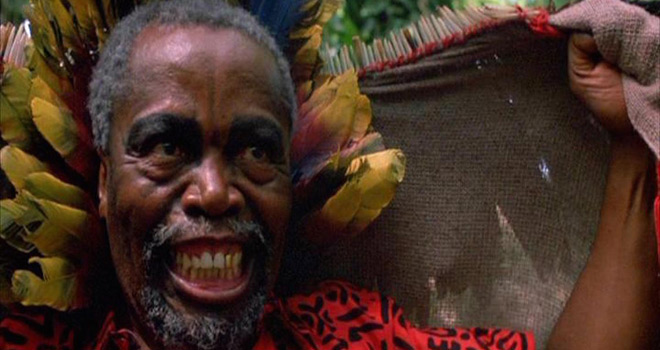 Now celebrating its 30th anniversary, The Serpent and the Rainbow initially premiered in 1,431 theaters across the US on Friday, February 5, 1988 via Universal Pictures. Utilizing an estimated budget of roughly $7 million, the film raked in nearly $6 million domestically on opening weekend, and has since generated a total lifetime gross of just about $20 million.

The story revolves around Dr. Dennis Alan (Pullman), who is approached by a pharmaceutical company to take a trip to Haiti and investigate the assertion that a previously dead and buried man by the name of Christophe Durand (Roberts) has risen from the grave and is virtually a living zombie that has been created using Voodoo magic. They would like the young anthropologist to look into the claims, verify its validity, determine how it is possible, and bring back samples of the powder which is confirmed as the major component of the zombification process. 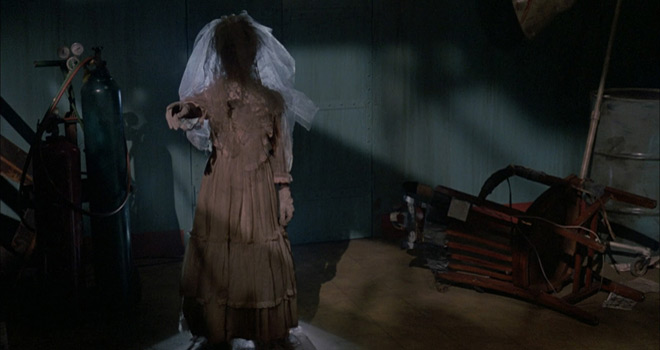 While in Haiti, Dennis meets up with Dr. Marielle Duchamp (Tyson), who then introduces him to Voodoo priest Lucien Celine (Winfield). With the country in the midst of great political strife and under tyrannical rule, Lucien instructs Dennis to keep his distance from the feared black magic Voodoo priest and man of great political influence, Dargent Peytraud (Mokae). Eventually, Dennis crosses paths with Louis Mozart (Jennings), a man who claims he can create the zombie powder that the researcher has been seeking; and with the help of Dennis, Louis agrees to take him through the rigorous process of making it. This ultimately creates challenges for Dennis, especially when he falls prey to the bokors and the grave consequences of meddling with such incomprehensibly powerful magic.

Besides the political tensions that are taking place during the film’s storyline, Haiti was still facing severe political conflict and civil turmoil five years later during production. It was so severe, in fact, that the local government alerted the crew that their safety could not be guaranteed; which is why they relocated to the Dominican Republic to shoot the remainder of the movie.

The true brilliance of this movie can be directly attributed to the creative genius that is Wes Craven, as not only provided a refreshingly new take on the classic zombie tale, but he also gave viewers an eye-opening and frightening glimpse into a religion that had only been used previously in films as more of a cinematic gimmick or scheme. He exposed a world of potentially threatening, unforeseeable supernatural forces that relied on possession, potions, and mysticism to overtake its believers; for both good and bad purposes. 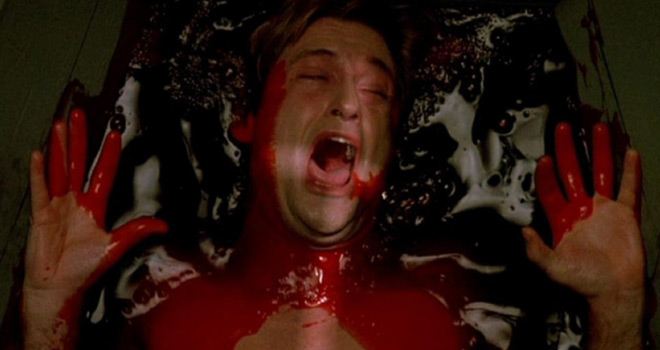 The cinematography and score were crucial in setting this film apart from others, and was the epitome of immersive, effectively placing viewers at the center of rituals, traditions, and ceremonies that they had no real grasp of. The recurring use of dreams, nightmares, and the damage inflicted by dream walkers under the control of dark forces, was portrayed with such incredibly surreal and chilling imagery. The way in which the hallucinations and nightmares were filmed, made it just as difficult for viewers to distinguish reality from fantasy, as it did the inflicted characters.

Speaking of visuals, the film also included some much appreciated special effects, and exceptionally entertaining yet horrifying happenings that fully embodied that widely celebrated ’80s style and flair that Horror fans have come to know and love; even in what may now be considered by some to be all of its remarkably cheesy gloriousness. The Horror community was truly robbed of an irreplaceable talent when Wes Craven passed away, but it is films such as The Serpent and the Rainbow, amongst his many others, that will allow his legacy to continue on indefinitely. 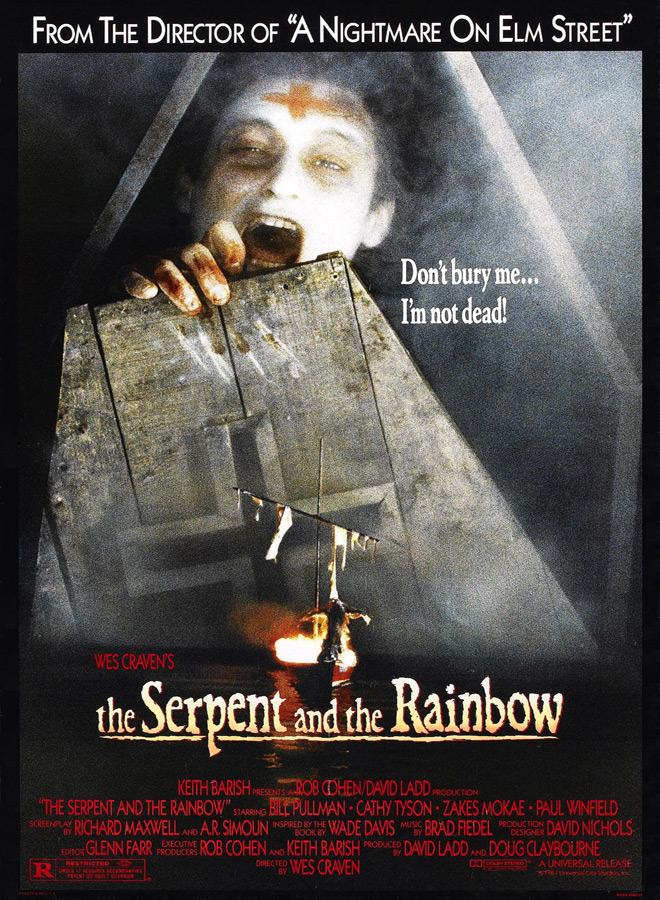 Purchase The Serpent and the Rainbow: