So as not to mince words, the advent of Punk Rock in the 1970s was an atomic bomb that completely devastated the musical terrain of a once smug and pretentious England. It completely reshaped the way musicians of the time thought and acted. From the fallout of Punk Rock, the Post-Punk movement was spawned. This opened up the door to a wide variety of experimentation seen in acts such as This Heat, Public Image Ltd., and the Fall. The early ‘80s saw a bit more of a streamlined scene, as some of the more traditionally minded bands rose to prominence. Among them were now household names like Bauhaus, Joy Division, and Echo & the Bunnymen. Perhaps the most widely known band of this era was the Smiths.

The Smiths, a quartet from Manchester comprised of Morrissey on vocals, Johnny Marr on guitar, Andy Rourke on bass, and Mike Joyce on drums, toed the line for bands in this era. The group was formed in 1982 and presented their unique brand of Post-Punk to the public. The Smiths’ guitar-driven Pop songs bolstered by Morrissey’s distinctive poetry and baritone set a standard in the to-come Indie Pop and Brit-Pop scenes that so many bands attempted to replicate thereafter. The Jangle Pop of the Byrds, Crazy Horse, and the Beatles had a major influence on Marr and Rourke, which shines through in the Smiths’ music. Morrissey’s approach to lyricism was carefree and childlike, yet cynical in an oddly studied way. The balance of social criticism, self-depreciation, and cultural awareness gives his lyrics flamboyant personality. He consistently drops the names of historical figures like poets John Keats, W.B. Yeats, Oscar Wilde (“Cemetery Gates”), Caligula (“Heaven Knows I’m Miserable Now”), and Joan of Arc (“Bigmouth Strikes Again”). The contrast between these sorts of songs, those that criticize England’s fetish for corporatism (“Panic,” “Paint a Vulgar Picture,” “The Queen Is Dead”), and the countless songs regarding love and loss portray the Smiths as a musical act complete with diverse lyrical themes.

Since 1982, they have been heralded as one of the most important bands of their time. Many critics claim that they were the most important British Rock group of the ‘80s, while NME magazine in particular named the Smiths the most influential act of the past fifty years. On this list, the Beatles were placed in the number two spot. Fittingly, the Smiths have enjoyed unanimous commercial success and critical praise and were a major influence on Indie Rock, Indie Pop, Alt-Rock, the “Madchester” scene of the late ‘80s and early ‘90s, and many more. Brit-Pop, on the other hand was a reactionary movement against the Smiths’ and Morrissey’s domination on the Rock scene of the era.

Although their short career lasted only until 1987 and spanned four full-length albums, their influence was exceptionally far-reaching. Three of their major LPs were placed on the Rolling Stone’s 500 Greatest Albums of All Time list. Their eponymous debut in 1984 established them as a Post-Punk tour de force, generating hit songs like “Reel Around the Fountain,” “Hand in Glove,” and “What Difference Does It Make?” The Smiths released three other LPs: Meat Is Murder (’85), The Queen Is Dead (’86), and Strangeways, Here We Come (’87). While these albums produced successful singles and album tracks like “That Joke Isn’t Funny Anymore,” “There Is a Light That Never Goes Out,” and “Stop Me if You’ve Heard This One Before,” the non-album singles compilation Hatful of Hollow (’84) contained some of the biggest songs the group has ever written, including “This Charming Man” and “Heaven Knows I’m Miserable Now.” Perhaps the most auspicious single included on Hatful of Hollow is “William, It Was Really Nothing,” of which contained the B-sides “Please, Please, Please, Let Me Get What I Want,” and “How Soon Is Now?” the latter included on later re-releases of Meat Is Murder, which is celebrating its thirtieth birthday this year.

Meat Is Murder kicked off with “The Headmaster Ritual,” a song that showcases how the Smiths can operate as a coherent single unit. The chorus is a perfect representation of the sum of its parts: each instrument and the vocals adds its own ingredient to the song, while Morrissey showcases his sturdy handle on his vocal control. The grooves featured on Meat Is Murder are some of the band’s most locked in and tight. “Nowhere Fast” sports a playful rhythm and irreverent, despondent lyrics, exemplifying Morrissey’s malaise in regards to the state. “What She Said” is a total rocker. Marr, Joyce, and Rourke dig into the uptempo syncopated groove, as Morrissey’s velvety croon sails effortlessly above. Atmosphere is the name of the game for a handful of tracks on the LP, as well. The ballad-esque single “That Joke Isn’t Funny Anymore” and the track “Well I Wonder” are both very clean throughout, providing a gentle and dreamlike, yet crisp ambience. “Well I Wonder” particularly succeeds at capturing an airy atmosphere. Morrissey’s trademark falsetto is prominent in the final minutes of the track, which leads into a sample of rainfall that ends the song. Lyrically, Meat Is Murder is a very strong album. “Rusholme Ruffians” tackles the concept of Manchester’s rough and tumble landscape with a sincere hope and reliance on the power of love, one of Morrissey’s favorite topics. He proclaims, “I might walk home alone, but my faith in love is still devout,” which fits squarely over bass-driven Rockabilly grooves headed by Rourke. “I Want the One I Can’t Have” includes the lyrical theme of a desire for the unobtainable, which in itself is also common in the Smiths’ catalog. Marr punctuates the song with glossy chords, while Joyce matches the allegro of the song perfectly. This album is not without agenda. “Barbarism Begins at Home” is an obvious jab at child abuse, a topic about which Morrissey seems to feel strongly. Musically, the song takes influence from Funk and Disco, not unlike records being released by Gang of Four or the Pop Group at the time. “Meat Is Murder” tackles an issue about which Morrissey is very outspoken: animal rights. As the name suggests, the lyrics deal with and advocate a vegetarian lifestyle.

Hands down, the most recognizable song on this record is “How Soon Is Now?” Previously released as a B-side to the non-album single “William, It Was Really Nothing,” “How Soon Is Now?” remains to be the Smiths’ trademark song, as well as a defining song of the ‘80s. From its beginning, the song can be immediately recognized by Marr’s dizzying, shimmering delayed guitars and swelling chords. The panning throughout this track, Morrissey’s whistling, and one-off bridge verses paint the track with a calculated awkwardness and intentionally off-kilter atmosphere. Morrissey’s vocals fit perfectly in the track; it seems as if each note was placed carefully, painstakingly, and with the utmost attention to detail. The hook in the chorus, “I am human and I need to belong just like everybody else does,” is arguably one of the most iconic melodies of the entire decade.

Although each record in the Smith’s catalog is essential for any Rock fan, Meat Is Murder is especially crucial culturally and musically. Each track on the album fits with the others aptly and poetically. As a package, Meat Is Murder is a lasting part of the ‘80s that should not be sidestepped. Time has proven that this album has not lost any value in its cutting hooks, nor has the skillful songwriting been bypassed by acts since. The Smiths set a standard for Pop music with Meat Is Murder that has been widely mimicked but never equalled. 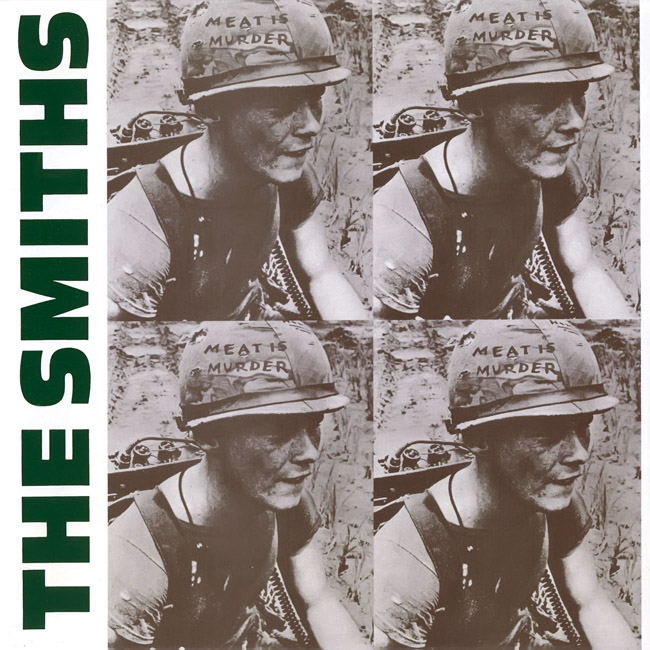