Struggling under the weight of a tragic loss, a young couple take to the lake for an emotional respite in The Unseen, a new Drama/Mystery/Thriller from the good folks at Magnet Films, which arrives to theaters in the UK Friday, December 15, 2017. 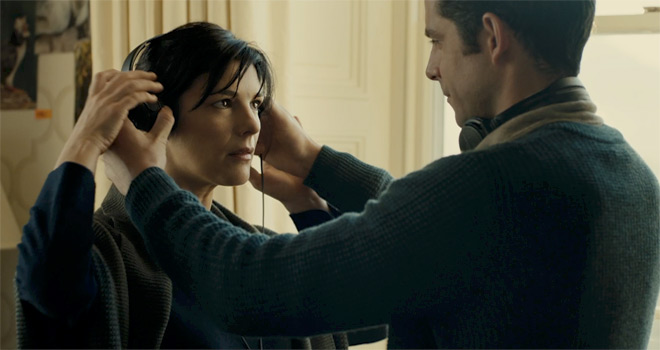 When a random, terrible accident leads to the horrifying death of little Joel Shields, his mother Gemma (Jasmine Hyde: Runt 2005, The Truth Commissioner 2016) and father Will (Richard Flood: Killing Kennedy 2013, Crossing Lines series) are sent into a spiral of depression. An audiobook narrator who is currently working on a project with the Holy Bible, Gemma attempts to deal with her sadness and sense of loss by sticking with her routine, while Will grows sullen, sleeps clutching his son’s teddy bear, and, in some senses, turns toward God for guidance.

Though, as the couple try their best to overcome this insurmountable tragedy, Gemma develops panic attacks accompanied by amaurosis, a visual impairment with no physiological explanation. With a sudden and unpredictable onset, Gemma is largely debilitated by her psychological issues. For his part, Will seems to develop auditory hallucinations: hearing his young son’s adorable little voice in the boy’s abandoned bedroom.

When a friend, a former corporate pharmacist named Paul (Simon Cotton: The Rise of the Krays 2015, Godless short 2017), offers the couple free usage of a guest cottage in the gorgeously serene Lake District of Cumbria County in Northwest England, the pair struggle with what is best in their given situation. Gemma is, at first, anxious to get away from the house in town where her little boy died, while Will is torn apart at the idea of leaving behind his son’s ghost. Eventually, the pair seem to collectively come to the conclusion that a momentary respite at the lake might be just what they need to renew their hope and spirits. 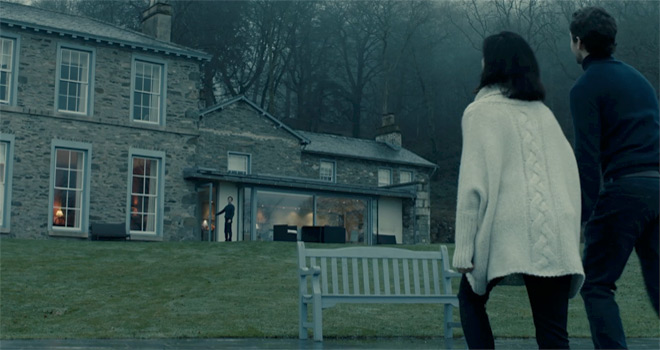 In fact, while in the countryside, Gemma has a chance encounter with a kindly taxi driver, Himesh (Sushil Chudasama: Clocking Off series, Collision 2009), which will lead this entire story to flip on its head and become an even bigger nightmare for the already tormented young couple. Clocking in at 108 minutes in-length, The Unseen was written and directed by Gary Sinyor (Leon the Pig Farmer 1992, The Bachelor 1999) and is billed as an amalgamation of Drama, Mystery, and Thriller.

The Unseen is a wonderfully-constructed film that toes the line between the psychological – initially suggesting a kind of Folie à deux episode – and traditional Thriller/Suspense elements, while also offering a hint of the paranormal for those that wish to grasp it. The end result is a smartly authored film that weaves a tale that embraces elements of Horror, Psychological Thriller, and Drama, all with an underlying pinch of Stephen King’s Misery baked into its pages.

Hyde and Flood as the Shields offer a wonderfully natural on-screen chemistry, beautifully portraying a couple haunted by the death of their toddler. Considering that this tragedy is, thankfully, not something most have experienced, the pair draw from their emotional reserves to paint a truly haunting picture with their superb acting skills. For his part, Cotton (as Paul), is unassuming and naturally embodies the role of a former corporate huckster who has retired to an idyllic life in the country with the birds. Not to be overlooked, Chudasama is a handsome, kind-hearted taxi driver; definitely no New York City cabbie. 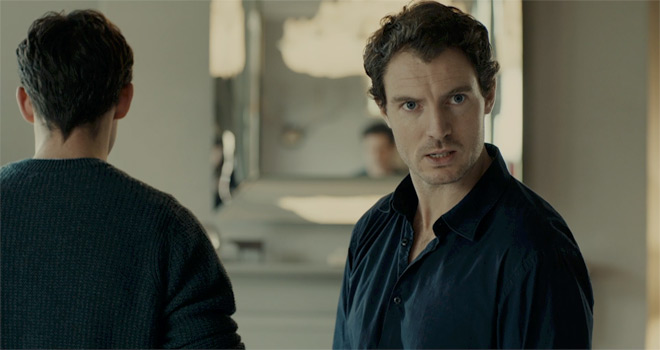 For Director Sinyor, the idea of portraying amaurosis on-screen – through exquisitely blurry and distorted visuals – is an intriguing one that grants the film a wholly unique spin. It also, for some sensitive viewers, might be apt to create headaches and nausea thanks to the out-of-focus and off-kilter visuals that appear throughout the film. Which should not be seen as a deterrent, but those with rampant motion sickness should come prepared to turn away when necessary.

The Unseen is a smart film steeped heavily in the psychological unraveling of a young couple who, at their darkest point, encounter a wholly new force of evil. With a gorgeous countryside setting, superb acting, and a multi-layered plot, this is a film that is the very best kind of Mystery/Thriller. Kind of like a Tana French novel brought to the screen, The Unseen offers intelligent thrills that build at a languid pace and yet haunt viewers long after the film’s end. For these reasons, CrypticRock give The Unseen 5 of 5 stars.