November 30, 2014 brought the mid-season finale of The Walking Dead, titled Coda.  Beginning right where Crossed left off, the episode started with Officer Bob running for his life and Rick giving a shout-out to his past by chasing the guy down in a cop car. He ran the guy down, breaking his back. Without mercy, Rick blew the guy away and, with barely a pause, went back inside to carry out the negotiation as planned. With the remaining two officers still willing to cooperate, the plan was at least promising.  Back at home base, Father Gabriel was wandering on his own after sneaking off in the previous episode. He came across the camp of the Termites, walkers still inside the school and banging on the already fragile glass. He also came across a Bible, which had once belonged to Gareth’s mother, Mary, before finally noticing the remains of Bob’s charred and rotted leg. This image was unbearable for the already fragile Gabriel, however he quickly jumped to his feet when the walkers finally bust through the glass. Following him all the way back to the church where Michonne, Carl and Judith were still holed up, the walkers were mostly taken out by the swordsmith and Sheriff’s son, although some ended up locked inside the church. Soon after, Team Washington returned from their abandoned adventure in the fire truck, and Maggie rejoiced, learning that Beth is still alive. 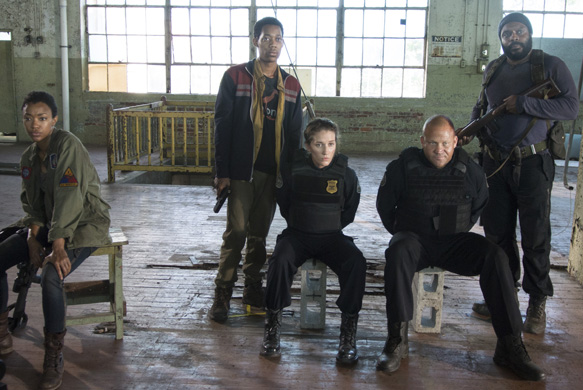 Meanwhile, in the hospital, Dawn tried to reach out to Beth, constantly reminding her how she saved the girl. Pointing out the incident with Officer Gorman, Dawn had apparently been aware of what really happened with Beth in that locked office, yet chose not to say anything. Unfortunately, a fellow cop was nearby and overheard the whole confession. Working together, the two managed to fight him off and push him down the elevator shaft, hence sharing another secret. Soon after, Beth began to realize that, although Dawn is in charge, she is literally fighting to hold on to that position.  The moment of truth finally came when Rick drew out more of Dawn’s officers and revealed his plan for an exchange. They met in the hospital, and traded one by one – Beth and the now awake Carol for the two Officers. Dawn suddenly decided that she would not let Noah leave with Rick’s group. After a failed negotiation, Beth got in her face and stabbed her with a small pair of scissors she’d had hidden in her sleeve. Dawn shot reflexively, hitting Beth in the head, killing her instantly. Daryl quickly retaliated and killed Dawn, taking down the powerhouse of the hospital, and leaving the remaining cops to whatever new way of life they wish. Outside, the rest of the group showed up to learn of the horrible news. The most notably effected was, of course, Maggie, who had arrived just in time to see Daryl carrying the still body of her little sister out of the deathly hospital. 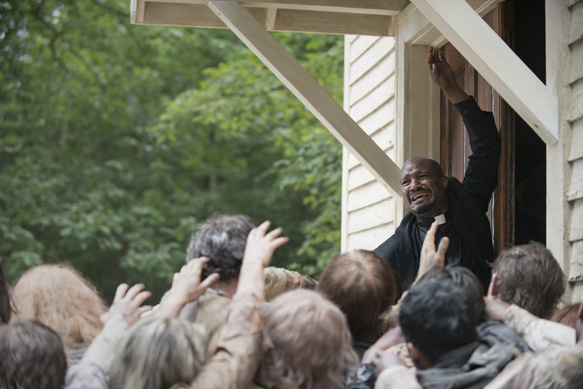 Just before the credits rolled, we saw Morgan, having last been seen in the season premiere No Sanctuary, still tracking markings left on trees and finally making his way to the church. While there, he said a little prayer before finding the map leading to Washington. Reading Abraham’s note to Rick, he flashed a smile before the credits brought this episode to a close. 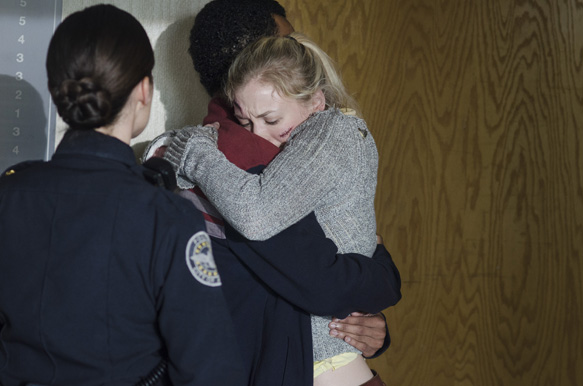 The more impressive aspects of Coda was the symbolism. When he was running back to the church, Father Gabriel was screaming for help, just like the people were when he was cowering inside. Upon the walkers invading the church, an arch was in view, revealing the words, “Those who eat my flesh and drink my blood have eternal life.”  It is sad that the family is one member short, especially since it happened so tragically. At the same time, Beth’s death scene was also somewhat unsatisfactory, as the whole incident could have been avoided. It was unclear exactly what she was thinking when stabbing Dawn with a small pair of scissors into most likely a bullet proof vest, and it was also confusing to see formerly trained police officer Dawn point the gun towards Beth’s head, get her finger in position, then pull the trigger accidentally. Deaths are expected, but it just did not seem that this one was well thought out.  CrypticRock gives Coda 4 out of 5 stars. 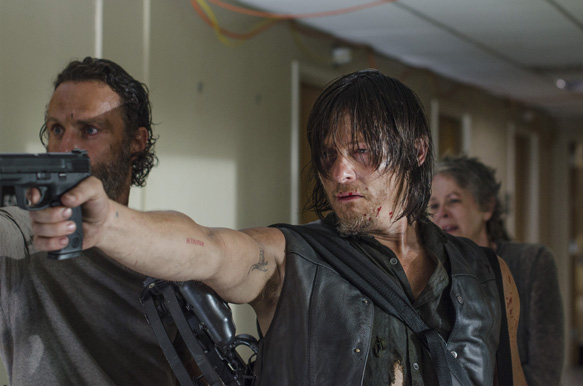