After a jaw dropping opening to season 7 of The Walking Dead, the proceeding episodes have been a mixed bag of events. In the last two episodes, the audience was able to revisit The Hilltop, and most recently introduced to a new camp known as Oceanside. Both unique episodes in their own way, slowly fans are beginning to see in what direction Season 7 is heading. 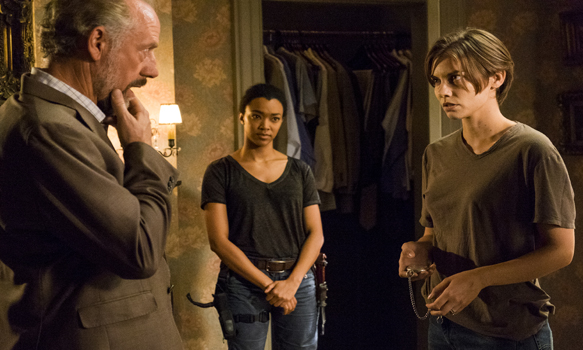 The episode Go Getters, premiering on Sunday, November 20, 2016, caught up to grieving Sasha and Maggie, who are currently residing at The Hilltop. Although Dr. Carson asks them to stay to monitor Maggie’s pregnancy, Gregory protests and asks them to leave in the morning. During that night, The Saviors open the gates and leave a locked Gremlin with a high volume music to attract Walkers, and Sasha, Maggie, and Jesus take them all out to save the community.

Simon and his crew show the next morning for their tribute, and display their own version of Negan’s rules. Before they could notice, Jesus and Gregory hide Sasha and Maggie, not aware of Negan’s knowledge of Maggie’s “death.” While they deal with Gregory, he proves to be a coward, and Jesus loses all faith in his leadership. While the Saviors are looting The Hilltop, Enid and Carl journey there to check on Maggie. When they notice the trucks, Carl secretly hitches a ride, determined to find their camp. Things get more interesting when Jesus has the same idea. 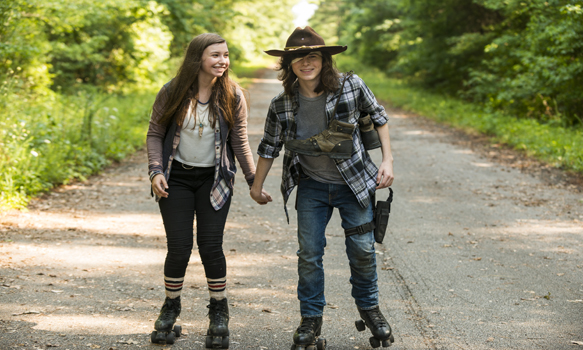 Away from all the tragedy caused by Negan and his Saviors, Tara and Heath are still out scavenging in the next episode entitled Swear. Initially premiering on Sunday, November 27, 2016, the duo get separated when they get attacked by Walkers in attempt to cross a bridge. Tara is forced off the side, and is carried away by the current, eventually washing ashore to be discovered by a young girl named Cyndie (Sydney Park: Instant Mom series, Spork 2010). Feeling sympathetic, she leaves Tara food, water, and a weapon, only to unknowingly lead her back to her hidden camp known as Oceanside. Tara’s lack of stealth almost gets her killed, but she is captured and brought to the leader, Natania (Deborah May: Johnny B Good 1988, The Kid 2000). Despite their rule to shoot strangers on sight, she asks Tara to stay, who respectfully declines. Upon realizing they share a common enemy, all bets are off as both parties contribute to their own survival.

A slower pace for the show, both Go Getters and Swear involved detail that will become crucial later on. Maggie is expected to take over The Hilltop, as Gregory is clearly unfit, looking out for no one but himself. Within the hidden camp of Oceanside, Tara noticed an arsenal that could be useful against Negan, although that idea is at a standstill for the time being. 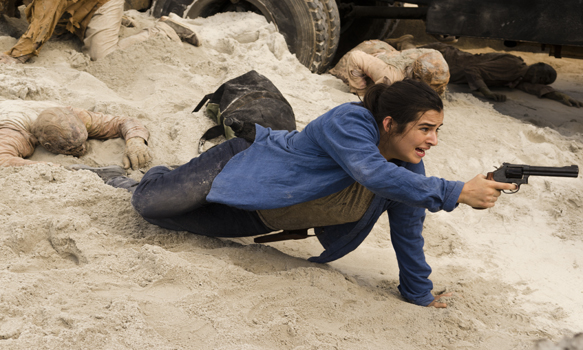 An interesting factor from both of these episodes is it is the first time the audience has seen Maggie and Sasha since the death of Glenn and Abraham, and the last seen of Tara and Heath was nine episodes ago, Season 6’s Not Tomorrow Yet, where they attacked one of Negan’s outposts, Glenn making his first human kill and seeing the gruesome pictures of Negan’s victims, a collection he is now a part of. Six weeks later from the brutal season premiere, there is constant tribute to the deceased characters, Maggie introducing her last name as “Rhee” as opposed to “Green.” She is also now the owner of the watch he carried, a gift given to him by her father, Hershel. Jesus gives Sasha Abraham’s necklace, a token ironically made by Rosita, and is later seen sharpening a knife with a cigar in her mouth. Tara honored Glenn by quoting him to Heath, saying, “There’s nothing left in this world that isn’t hidden,” last heard in Season 5’s Strangers.

For the fight scene in Go Getters, Tom Payne did extensive training for Jesus’ fighting style, as it is so iconic in the Comics. Fans should head to the internet and check out the training footage, now complete with slow motion kicks and ’80s music, a hilarious tribute from Chris Hardwick (The Talking Dead). It is also worth noting Sonequa Martin-Green’s dedication to the show, as throughout filming “Go Getters,” she battled a stomach virus and was constantly sick in between takes. For the Walker attack on Tara and Heath on the bridge seen in Swear, Greg Nicotero quoted the “Sandwalkers” was influenced by Lucio Fulci’s 1979 Italian Horror classic Zombie. The intended look required full bodysuits, intact with breathing tubes for the fourteen participating actors.

The storyline following the intense premiere has not been a fan favorite over the last few weeks. Where most are impatient, fans need to remember that something bigger is coming. It is only a matter of time before Negan’s reign is questioned, and the other camps come together for an all out war. As the show progresses, cast and crew need to move forward, introducing new content that makes sense to the story, as opposed to repeating itself. Remember, The Walking Dead is not a two hour movie, but a long time running show whose end is not in the near future. Politics may not be a favorite factor on the show, but a necessary element for the greater reward. Gearing up for Sing Me a Song, premiering Sunday, December 4, 2016, CrypticRock gives Go Getters and Swear 4 out of 5 stars. 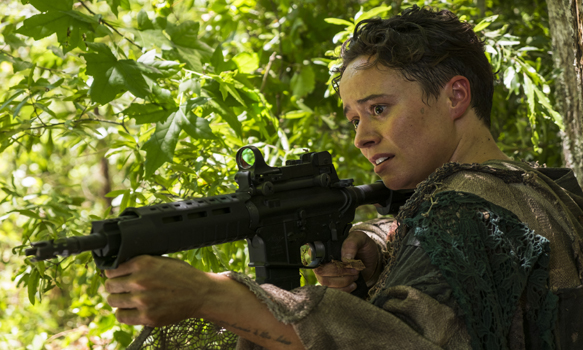