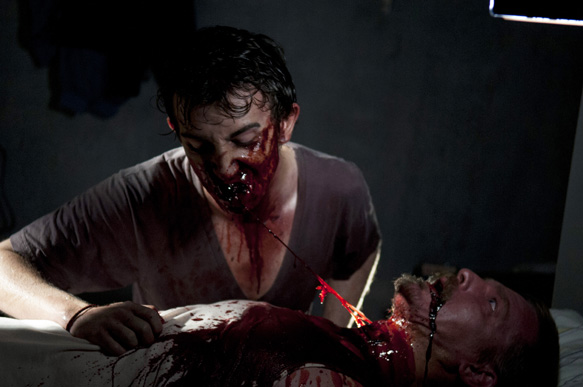 Well, walker-Patrick wasted no time causing mayhem in the prison. Karen, after spending some alone-time with Tyreese and consoling him over Zack’s death, unknowingly leads Patrick back to her cell block. As she lies back into her bed, a cough from a nearby cell calls Patrick’s attention and he goes to work. The viewers get to see how quickly a group of walkers can form, as one turns into two which turns into four, etc. As Rick and Carl tend to the farm while morning sets in, Carl presses his dad again about getting his gun back and taking down walkers. Carl though seems less like he’s just blood-thirsty, rather, he’s trying to be practical; he and those around him would be safer if he were armed. Rick, however, still won’t hear any of it. Based on last episode (and continued through this one), Carol and Rick seem to be in an indirect tug-of-war between preserving the innocence of those who still have some and teaching them what they need to know how to do in order to survive.

The conversation swiftly ends once children come running out of the prison and exclaim that there are walkers within their cell block. Everyone quickly springs into action (though Rick enters weaponless) and begins organizing the chaos ensuing within D-block. As most run off to help the cell block Michonne, who was just about to go look for The Governor again, turns around to help. Regretfully, she gets caught up by a few walkers after Carl opens the gate for her. Carl, reluctantly, has to pick up the gun by the gate to put one walker down while Maggie comes to help Michonne back into the yard as she hurt her ankle in the scuffle. The threat in the prison is dealt with swiftly and they take toll of the damage. Most importantly, it seems Patrick wasn’t the only one who turned without being bit; another resident who had locked himself in due to sleep-walking also died and turned during the night. A flu-strain seems to have found a nice home within and around the prison which is strong enough to kill someone in one day. 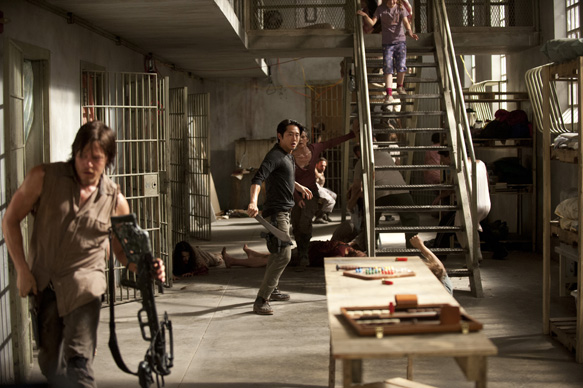 As Rick and his trusty team of medical professionals discuss what could be causing the sickness, Carol tends to a resident of the cell block who had been bit but saved from being killed by the walker. The location of his bite prevents amputation, so he has nothing left to do but wait and turn. He bids his two daughters goodbye before passing and the eldest Lizzy, who was the child in the last episode who was giving the walkers outside the prison names, requests permission from Carol to be the one who prevents her dad from turning. Carol agrees but Lizzy freezes up, leaving Carol to handle the dirty work.

Next, most of the council has a meeting to discuss the new sickness and how to deal with it. They decide that the best course is to try to isolate those who have been exposed to it from those who haven’t been, and those who show active symptoms from everyone else. As they come to agreement, Karen is heard coughing loudly, with Tyreese leading her back to his cell. The council puts their agreement into immediate action, isolating Karen and another man, David, in “the tombs” while they are treated. Carol then tends to what she feels is an issue with Lizzy. As stated earlier, Carol seems to be vying more for the preservation of life over the preservation of innocent. She doesn’t hide this, telling Lizzy that she’s weak and needs to learn how to think and act quickly to survive. It would be shallow to pin all of Carol’s motives on the loss of her daughter, but it does seem to be a part of it. Lizzy’s father asked her to look after his kids as if they were her own, and Carol surely knows what actions could have been taken to keep her own daughter alive. Carol has really come into her own as a strong character these last two seasons, no longer being the helpless puppy she was in the beginning.

As Carol’s conversation with Lizzy and her sister goes on, Rick walks out to help Daryl who is digging graves for the bodies of the people they lost earlier. Daryl thanks Rick for the help in dealing with the walkers, but Rick brushes it aside. Daryl tries to convince Rick to take up his mantle again as a leader of the group. Rick seems to have been bouncing between extremes since season 3. Throughout last season, he was the leader who had no problem making the tough decisions with a kill-first, think-later attitude toward the walkers and to some people. Now, he seems to have gone as pacifistic as he can, only putting down walkers when absolutely necessary. He feels that almost all of his actions were mistakes and he can’t take responsibility for the group’s survival, to which Daryl responds by saying Rick hasn’t made mistakes, he’s just been there with the shovel whenever the shit hits. 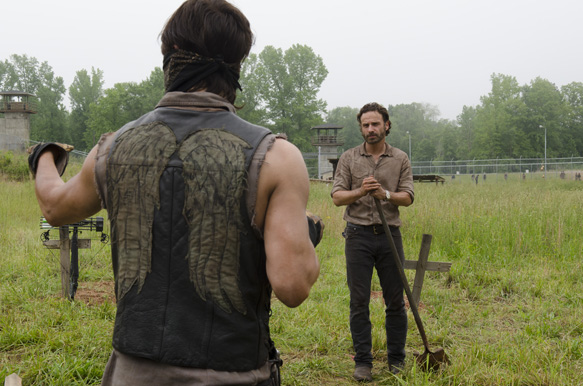 Meanwhile, Beth is treating Michonne’s ankle, and the viewers finally get more insight into why Michonne is the way she is. Her first words are about how Carl and Maggie should have left her because they could have gotten hurt. This explains part of why she tries so hard to be a loner; when caring for others and cared for in return, everyone is at risk of hurting one another—a piece of advice which Beth doles out immediately. Michonne doesn’t want others to care so deeply for her because if they do and something happens to her, it could destroy them. She knows this feeling all too well, and not just with Andrea. It is revealed, or at least extremely heavily implied, that Michonne belongs to the nameless group of those with indescribable grief: a parent who has lost a child. She first refuses to take Judith from Beth who needs to clean her shirt, but when she finally complies, all she can do is hold Judith close and cry, likely bringing back memories of her own child, something that is sure to be explained in the future.

Back outside, Daryl and Rick are called over by Maggie because the walkers have piled up enough that they are at risk of bringing the fence down and getting into the prison area. Tyreese, Glenn, and Sasha join in, but the walkers are stacking up faster than they can get them off. As they work to keep the fence up, Sasha notices half-eaten rats lying by the fence, indicating that someone must have been feeding them from inside the prison. The prime suspect would currently be Lizzy, as she’s the only one the viewers have seen still feel affection for the walkers and think of them as people (though Carol essentially beat that out of her with some tough-love). As the fence gets closer and closer to toppling, Rick tells Daryl to get the truck, having a plan as to how to get the walkers off the fence, a least temporarily. 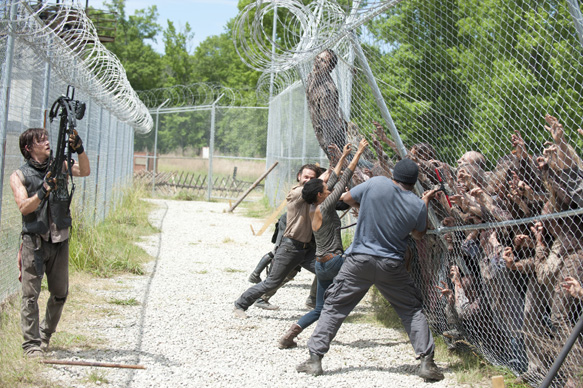 Rick decides to sacrifice the remaining pigs the prison has to lure the walkers off the fence and keep them busy for a while. As he cuts each pig and places it on the ground, the viewer can see the regret in his face. Firstly, perhaps he went against his own advice and had some affection for the pigs which would make their sacrifice harder on him, but mostly, it seems that he’s just had enough of killing, of blood, of hard but necessary decisions. Whatever reluctance he had, however, seems to be have been placed on the back-burner in his final moments of the episode, as he puts his python back around his waist and hands Carl back his gun. Nearly simultaneously, Lizzy meets with and finally takes the knife from Carol, conceding that she has been weak and that it’s time for practicality. It’s too early to say if the tug-of-war is over, but realism has triumphed over innocence for now. As much as everyone would love to lie to themselves about the world and its dangers, or even just how safe the prison really is, they are finally seeing how wrong they’ve been looking at their circumstances.
To end the episode, the writers travel to a very dark place. They’ve created some gut-wrenching scenes throughout the series, and the final scene of Infected definitely ranks near the top. As Tyreese heads down to the tombs to give Karen some flowers and check how she’s feeling, he’s greeted with an empty and bloody cell. Tyreese follows the trail of blood outside only to find two charred bodies lying on the concrete: Karen’s and David’s. It doesn’t seem that Beth’s “days without an accident” counter will be ticking any time soon.

All-in-all, Infected earns 3.5/5 stars from CrypticRock.com. It seems the stage is set for the rest of the season, with most character’s upcoming plot-lines at least briefly presented and ready to go. Now, all that’s left is to wait and see where the writer’s take us. 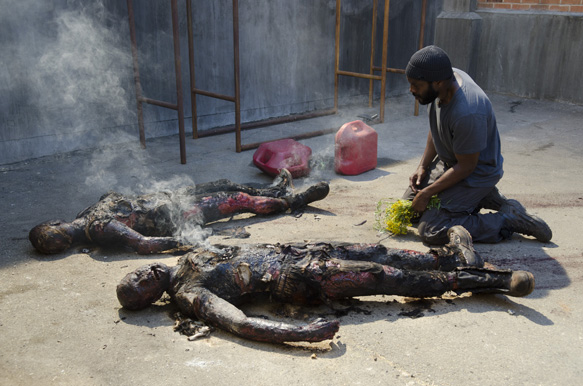