Hershel has done some pretty awesome things on The Walking Dead: from saving Carl, to losing a good bit of his leg, to hitting walkers with crutches, but this week’s episode was by far his most badass story yet. The majority of the hour focused on Hershel and how hard he has been working to keep everyone alive. He is aided by Sasha, Glenn, and Caleb when they are each feeling up to it. He’s been working what seems nearly round-the-clock to keep people alive, and the plates had not come any closer to ceasing their wobbles.

Hershel has not been hiding from the danger he is in by locking himself in the sick-ward, he has simply been facing it and working through it. He knows that he could catch this illness any day now. He is willing to risk his life to keep these people alive for just a few more hours if that is all he can buy them. Past his work to keep up the physical health of the sick, he is also cognizant of the effect that negativity can have on the chances of one’s recovery from illness. Glenn’s pessimism is likely a sentiment shared among the entire infected cell-block, but Hershel will have none of it. Regardless of how hard things have gotten and the people he has lost he still finds ways to crack jokes. He continues to keep up the spirits of those he is caring for, even with something as simple as suggesting they have a spaghetti night every week. Even when he loses a patient, he makes sure not to put anyone down in front of the rest—seeing someone who had the same sickness succumb to it and watching them killed again afterward could not be any more demoralizing. The demoralization is detrimental to the well-being of his patients. 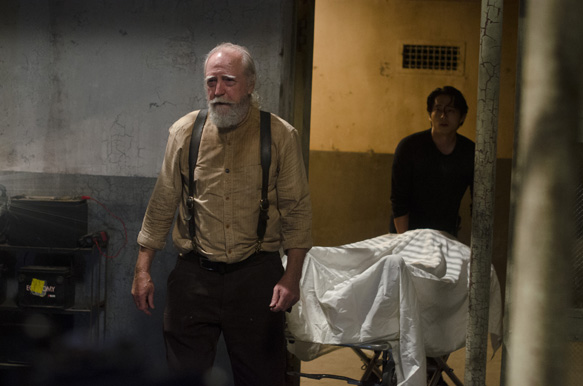 Hershel essentially fought a war with three severely wounded comrades with no idea when reinforcements would arrive, but he appeared to never let doubt crawl into his head. He gave everyone a job to do, from keeping an eye on one another, to reading a book to distract from reality. Facing reality has been quite the issue this season, and it boils down to just knowing when to face it and when to persevere in spite of it. Realism in that cell-block would be “deadlier than a germ” as Hershel put it, but idealism outside the walls of the prison would have an equally catastrophic result. However, practicality still had its place within the sick-ward. Were it not for Caleb’s thinking-ahead for keeping all the cell doors closed and bringing weapons with him, Hershel and the rest of them may have perished to the few walkers. While on the subject of shooting walkers, nothing demonstrated better how far Hershel was willing to go to protect psyches than when he lured the walkers into an isolated room to put them down to avoid killing them in front of the children. After all was said and done, it was nice to see others like Bob Stookey take over the treatment and for Hershel to get a break. Watching Hershel cry was possibly one of the hardest things to watch this season—to see a man of such strength and optimism succumb to reality after his war has ended is horribly depressing.  Alas, Hershel being Hershel, he seemed pretty high in spirits after it all. He will not let the world knock him down, no doubt something he has passed on to Beth. 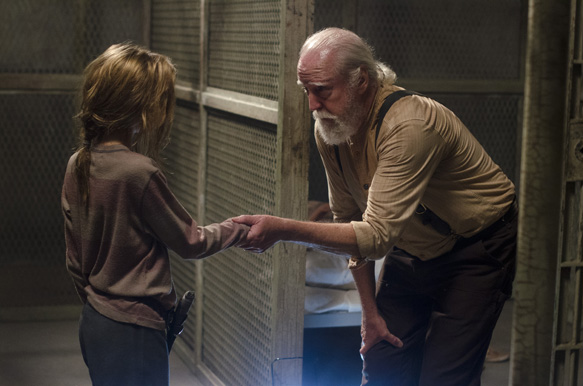 Now, let us get back to the subjects of children and guns. Carl and Rick had quite the father-son walker killing bonding this episode. It is still easy to spot the hesitation in Rick’s eyes whenever his hard choices involve allowing Carl to do any killing. He has been giving in more and more as Carl proves that he will not give in to the lure of “survival of the fittest” again. Both characters have found their centers once more after treading through the extremes, and Carl more and more comes to resemble his father. It was also very crucial for Rick keeping himself together to have acceptance over his decision regarding Carol, which he no doubt has had lingering second-thoughts about. Maggie and Hershel’s agreement with what he had done was reassurance in his ability to lead and to make the hard decisions. Hopefully from here Rick can stop questioning himself and asking for reassurance and simply act again.

Finally, how about that ending, huh? After complete absence from the episode and seeming disappearance from the face of the earth, the governor has returned! It was expected that just as the medicine came back and things were looking up that something or someone was going to have to throw a wrench into the works. With the ambiance of that music making the adrenaline pump, it was as if a favorite character had just bit the dust. It would be wonderful if we could see everything the man has been up to since he slaughtered his own army, but what comes next will undoubtedly be even more thrilling. This week’s episode was the best of the season thus far, and as such, we here at CrypticRock award it 4.5 out of 5 stars. 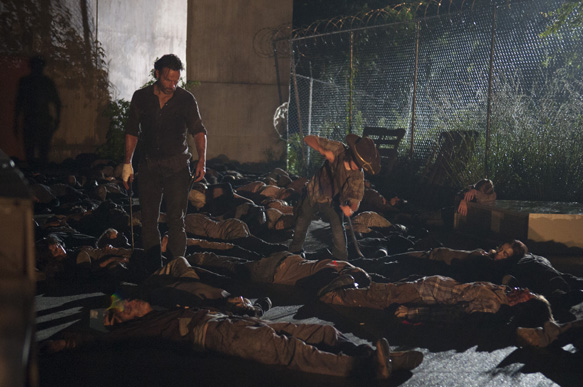