Airing on Sunday February 28th, The Walking Dead’s Knots Untie broadened some horizons for our main characters, introducing another community that has a lot to offer. Of course, everything comes with a price, and although this new course can be a win for everyone, the dangers involved are not quite clear. While taking all of it in, Abraham struggles with a decision involving his current relationship with Rosita and his new feelings towards Sasha. 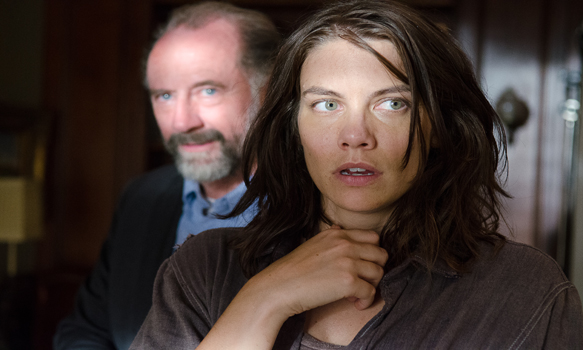 Unable to keep him locked up, Jesus surprises Rick and Michonne, wanting to make an offer. He tells everyone of his camp, called The Hilltop, and brings a few back with him to legitimize a deal. He shares with them of their troubles with Negan and his group, The Saviors. Rick agrees to show force against Negan in exchange for food. Soon after their arrival, they meet the man in charge, Gregory (Xander Berkeley: Terminator 2:Judgement Day 1991, Salem TV series), a seemingly harmless man with an abrasive personality. Maggie, in her new role as negotiator, confronts Gregory. He is stubborn at first, but comes to terms with Maggie after the group get to display their strength against a few of The Hilltop’s own people. Now equipped with food, Rick and the others head back to Alexandria to tell the others what they learned.

Coping with his own feelings, Abraham seeks advice from a few friends about settling down. He finally comes to a decision during an altercation, quietly taking advice from one of The Hilltops own, Freddy, who mentioned his deceased wife flashed before him when he thought he was going to die. Abraham’s next move is unbeknownst to the audience for now, but his broken necklace handmade by Rosita could be a clue. 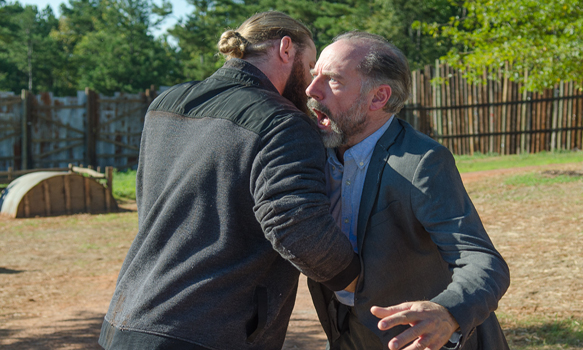 This episode is a turning point for our characters, introducing a whole new community that could have a positive impact. Jesus has proven his worth, and is expected to become a fan favorite. Once again, Negan only exists through storytelling, so fans will have to continue to wait until he finally appears. Even without his presence, a few members of The Hilltop were still able to paint an ugly and terrifying picture of him.

All that aside, there were also a few comical moments. Andrew Lincoln got to, yet again, display how Rick can make the world’s worst first impression after he killed Ethan (Justin Kucsulain: Iron Man 3 2013, Bloodline TV series) for stabbing Gregory to gain his brother’s freedom back from Negan. Covered in blood, he simply asks everyone, “What?” This is just another typical day in the zombie apocalypse. Thanks to Michael Cohen, who plays Abraham, after a discussion with Glenn about Glenn and Maggie’s expanding family, no one will ever look at Bisquick and pancakes the same, ever again. 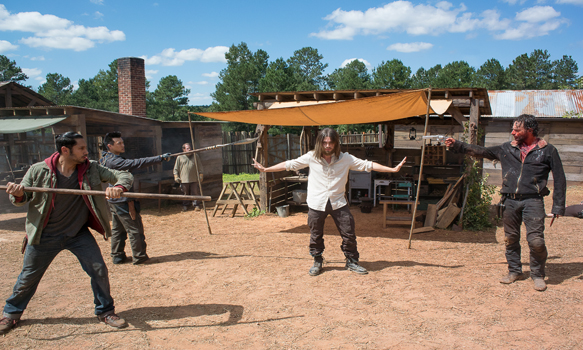 As far as visuals, the set of The Hilltop was quite impressive, the blueprint designed right from the comic. Each corner was authentic, right down to an actual chicken coop and an area for a blacksmith to work. The main house was also freshly built, but held the authenticity of Jesus’s story, saying it was built in the 1930s.

For the most part, Knots Untie was a fulfilling episode, moving the story along at a decent pace. The fact that Rick is overly confident can be cause for concern, but a positive ending involving food and a sonogram of Glenn and Maggie’s unborn child is nice to endure until Sunday March 6th episode, titled Not Tomorrow Yet. CrypticRock gives Knots Untie a 4 out of 5 stars. 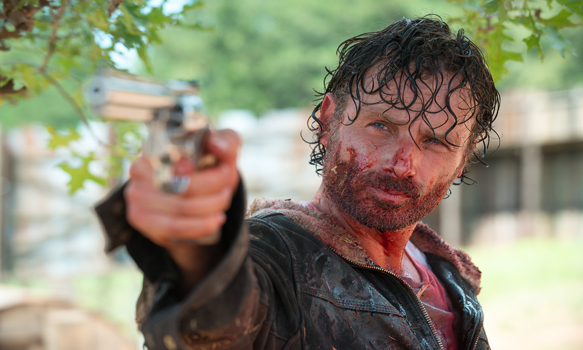